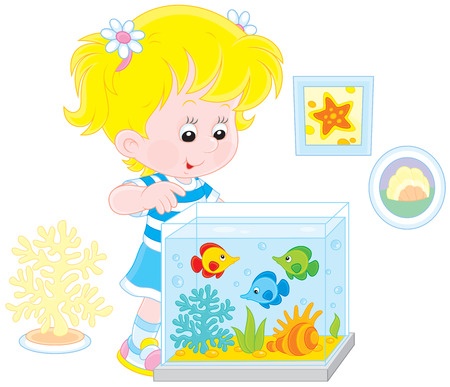 The guppies were dead, to begin with. There is no doubt whatever about that. They were flushed by the hand of my husband, mourned by my daughters who’d named them, and “good riddanced" by me. Allatournia, Nightlight, and Squid-fishy were as dead as doornails.

After washing the fish tank for the last time, my husband turned to me and said, “Janae, I’m so sorry I couldn’t keep them alive for you.”

“Are you kidding? I never wanted them,” I said.

“You ‘never wanted them’? Janae, I only got them because you were so excited about it.”

Excited? When was I excited? He was the excited one, I remember.

My friend had emailed, listing a few toys her family was giving away and asking if anyone was interested. Of course I was interested; free toys are always interesting, especially when they’re offered in time for Christmas. I said I’d take them and we left it at that.

December was a busy month for us (Ha! When is December ever slow?) and I had forgotten about our toy-talk so I was genuinely surprised to get a knock on our front door the night before Christmas Eve.

I had either forgotten what toys my friend had mentioned or I hadn’t read the email very well. There were so many of them. As in, multiple trips from the car to our door to hand over the goods, many. It was exciting and I felt like a kid again.

I remembered discussing the little plastic shopping cart. I thought my two-year-old would enjoy that.

I remembered her mentioning the little pink table and chairs. I was glad my kids would now have a dedicated “art table” to destroy with paint and markers and crayons and food.

I did not remember anything in the email about the bags of naked dolls or the fish tank.

And — apparently — I did not remember to tell my husband about any of this. There was a shocked look on his face as he was handed item after item. He was trying to be gracious at the door, despite his confusion.

I wasn’t that much more prepared for the delivery, but I would never say no to quality hand-me-downs and figured I would simply sort through everything to decide what we really wanted to keep and what we would pass on to Goodwill. I couldn’t do that at the door with hands full of my friend’s kindness so the explanation for my hubby would have to wait.

After saying goodbye and closing the door I turned to see my husband holding a large brown paper bag with the fish tank inside.

I had killed every fish I’d ever owned. I didn’t want fish, but it looked like he did. And he has such a cute, little-boy-excited face when he wants something.

“Maybe the girls will stop asking for a puppy,” I said, and the next day my husband filled the fish tank with three guppies.

The excitement on my end lasted for about a day and a half. I loathed the thought of uncapping their food jar purely because of the smell, but my girls were enthusiastic about feeding their fish every morning. They carefully counted out three flakes to put in the water while I cleaned up whatever extra they’d spilled on the floor.

I kept doing the fish thing because I couldn’t forget the look on my husband’s face — the adorable excitement. He’d seemed so happy to give the girls a real pet. But I still refused to clean the tank out. Whenever it started looking nasty I gave a reminder to my husband, the man who wanted the fish in the first place.

One morning my daughter said, “Look, Squid-fishy has a beard!”

Sure enough, that fish had something white and fuzzy hanging down from its mouth. I googled it and found out it had a bacterial infection. My valiant husband bought what the Petsmart man told him to buy and poured it in the water, but all three eventually sprouted the fatal beards.

The point is, we tried. We really did. Evidently we both tried, thinking the other one was seriously invested and we didn’t want to let each other down.

“Are you kidding? I never wanted them,” I said.

“You ‘never wanted them’? Janae, I only got them because you were so excited about it.”

As we stood in the kitchen, staring at each other, I thought about all the months I’d bugged him to clean the tank, now realizing that he’d been doing it for me and probably wondering why I wouldn’t do it for myself.

There was no romantic, gift-of-the-magi thoughtfulness on my end, unfortunately. I’m Scrooge. But at least, like Scrooge, my three, bearded guppy ghosts came back from the pipes to remind me that open, honest communication is always important, especially at Christmastime.