Home localities often provide the richest troves of work by their native artists. If you want to savor the biggest caches of paintings by the glorious Missouri-boatmen painter Caleb Bingham (1811-1879), visit the art museums in St. Louis and Kansas City.

Americans readily recognize the name of Peter Paul Rubens, and they will find his paintings in our well-endowed museums. Significant collections are found in the Louvre, Paris, and the Prado, Madrid. But to be really immersed in the master’s work, go to his home town, Antwerp, Belgium, or to the Royal Museum of Fine Arts not far away in Bruxelles. 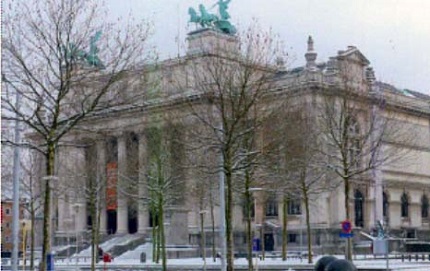 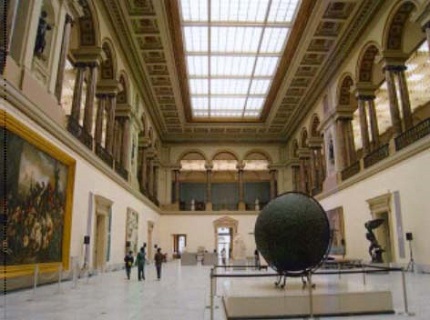 The Royal Museum of Fine Arts, Bruxelles (Brussels, if you prefer; I don’t)

These two museums house fabulous Flemish collections, but their web sites are inscrutable at best. I wanted to say abominable. The Antwerp Museum is working on a cyber tour of its Rubens Room, but the tour is not working. And don’t hie off to the museum after reading the tales I am going to tell about Rubens. The museum is closed for renovations until sometime in 2017. 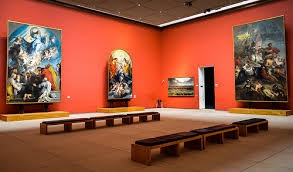 A corner of the Rubens Room.

Before embarking on a string of stories about Peter Paul, let me introduce several other Antwerp School artists you’d encounter in these two localities. The list is long. It includes 24 very fine artists from the 16th century and 23 from the 17th whose works most Americans have never encountered.

One of my favorites from the 16th was Paul Bril, whom I had never heard of until I encountered several of his paintings in an obscure side gallery of the Vienna Museum. That put me on the lookout for more of his work in other museums. (I recounted this is an early “Moments” column.)

Here are some of the best-known Antwerp School artists, mostly from the 17th:

Painter and printmaker, may be the best known of that list of 24 16th-century artists. He painted Biblical interpretations and so many peasant scenes that he sometimes is referred to as “Peasant Breugel.”

He entered Antwerp’s Guild of St. Luke (painter’s guild) in 1551. He went off to Italy, via France, a year or two later, then returned home via the Alps, which he depicted in a number of drawings. He married a painter’s daughter in 1563.

Antwerp was caught up in the political/religious conflict of the Low Countries, part of the Habsburg Empire, governed by Spain. The northern provinces followed Protestant leaders who wanted religious freedom and independence from Spain. The Protestant iconoclasts perpetrated the destruction of all church imagery — in painting and sculpture.

Especially in the southern provinces the Habsburgs attempted strict uniformity to the Catholic church, leading to the Inquisition. Towards the end of Breugel’s life this led to the outbreak of the Eighty Years War. 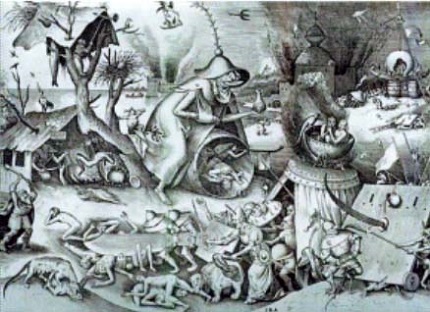 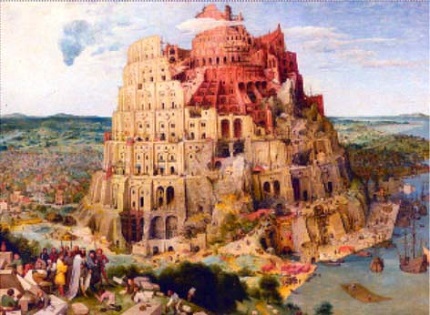 This is perhaps the artist’s most famous depiction. One of his peasant scenes can be seen in my column last December about the best Christmas banquet ever.

In time, there were five Breugels who became members of the Guild of St. Luke. Peter Breugel the Younger was called the “Hell Breugel” because several paintings depicting fire and grotesque imagery were once attributed to him. They were really done by his brother, Jan Breugel the Older.

Peter the Younger was a good painter in his own right, but he was also an extraordinary copyist. One of his dad’s most famous works was Winter Landscapes with Skaters and a Bird Trap. The son and his workshop painted at least 60 replicas. He made at least 25 copies of the Elder’s St. Jean the Baptist Preaching. 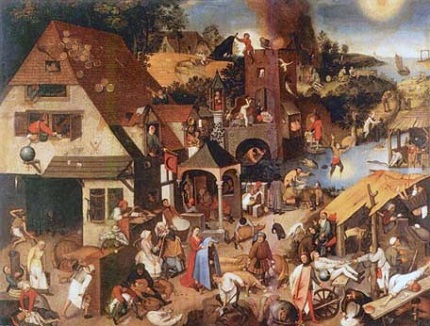 Taught by his father, the Younger spent his life painting in a Flemish Baroque style in the manner of his father. He was not quite as good as his father and had a lighter touch. He also copied some of his father’s paintings and put his father’s signature on them, in effect, forging them. 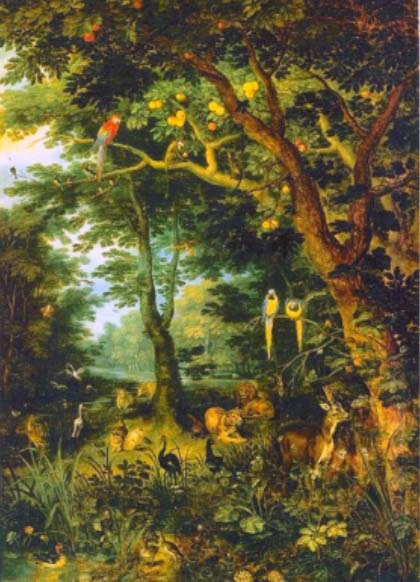 Born to prosperous Antwerp parents, Van Dyke, artistically gifted since birth, was a close friend to Jan Breugel the Younger. When he was only 18 he was admitted as a master painter to the Guild of St. Luke. He soon became the chief assistant to Rubens, who referred to the nineteen-year-old as the best pupil he had.

In 1620, he went to England briefly to work for King James I. In England he saw his first Titian, and its impact changed his style from the compositional lessons he had learned from Rubens. After four months in England, he took off for Renaissance, Italy, where he remained for six years studying the old masters.

He went back to Antwerp, where he made a name for himself as a portrait painter. In 1630, he was the court painter to the Habsburg Governor of Flanders, the Archduchess Isabella. Until Cromwell dispatched him, King Charles I of England was a passionate collector of art and artists. In 1628, Charles bought the collection of the Gonzagas of Mantua. Four years later he added Van Dyke to his collection as a court painter, one of several he was luring to England.

Van Dyke stayed in England, where he painted portraits of King Charles more than 40 times. Not to mention 30 of the queen. 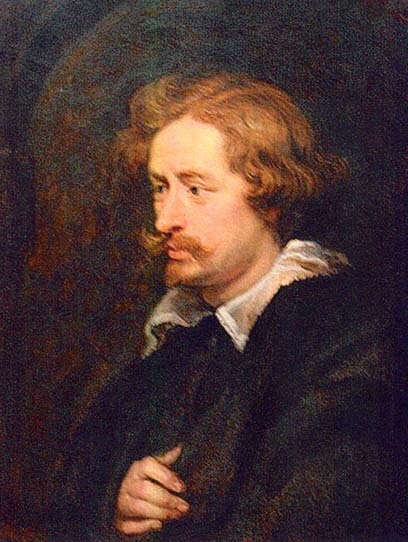 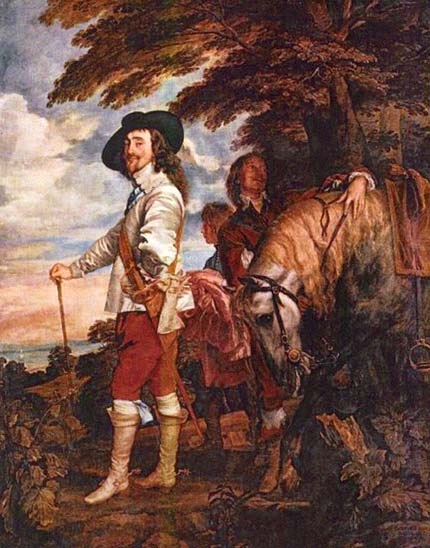 Although Snyders painted popular scenes and still lifes, he made a huge reputation as a painter of animals. He often collaborated with fellow Antwerp artists Rubens, Van Dyke, and Jacob Jordaens.

His father was the keeper of a wine inn frequented by artists. Frans was a student of Peter Breugel the Younger and was accepted as a master by the Guild of St. Luke in 1602. Carrying a letter of introduction from Jan Breugel the Elder, who wanted him to paint a replica of a replica of a Titian portrait, Frans took off for Italy.

Frans returned to Antwerp and married the sister of two well-known painters (not Breugels). He helped Rubens decorate the hunting pavilion of Philip IV of Spain and the Royal Alcazar in Madrid.

He collaborated with Snyders in painting 60 hunting paintings, followed by a commission for 18 more. He became Dean of the Guild of St. Luke. When Rubens died, Snyders was the official appraiser for the estate. 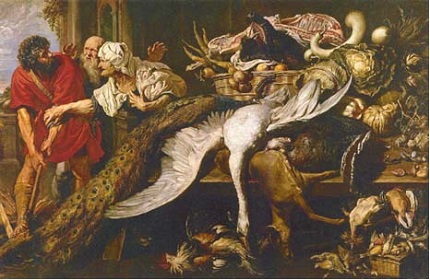 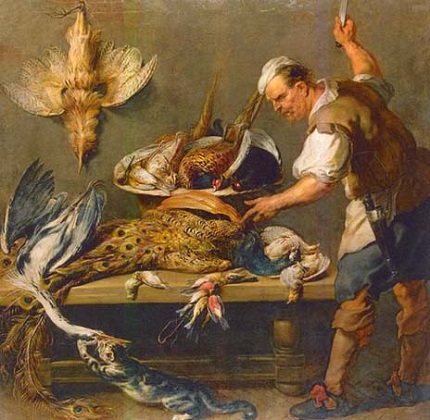 Snyders, Cook at a Kitchen Table with Dead Game

Unlike the other Antwerpers we have examined, Jordaens never traipsed off to Italy to study old masters, although he did admire some of the painters from Northern Italy. His longest away from home was a trip to Holland. One of 11 children fathered by a prosperous linen dealer, Jacob could have gone anywhere to study or play.

Subsequent to the older Rubens and Van Dyke, he became the leading baroque painter of the time. After Rubens died, Jordaens became the painter of choice for large-scale commissions. He excelled in painting large set pieces depicting Bible subjects, much like his contemporary Jan Breugel the Elder. His conversion from Catholicism to Protestantism did not conflict with his passion for religious paintings.

When he enrolled in the Guild of St. Luke, it was as a watercolor artist. This technical skill led him into creating cartoons for handwoven tapestries, for which he became equally famous. 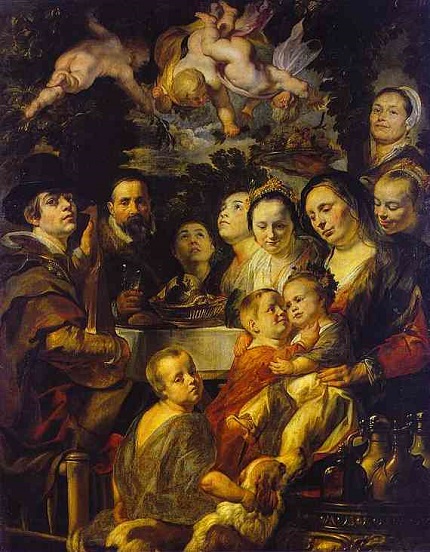 Jacob Jordaens, Self Portrait with Parents, Brothers, and Sisters, 1615 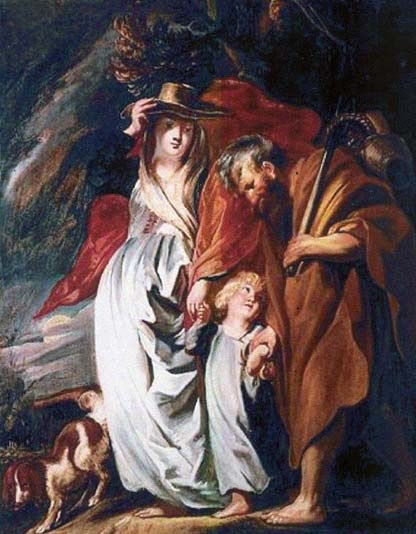 Jacob Jordaens, Return of the Holy Family from Egypt

This introduction to some of the important artists from the School of Antwerp sets up my series of tales about Rubens. However, to understand Rubens’s adventures, we need to take closer looks at Antwerp (next week), the Guild of St. Luke, and the Friday Market (the following week). Then the tales of Rubens take off. He was much more than a painter. Think of him as a faker and an international spy.