When I was still living in the States, I once tried to rescue an elderly woman in my neighborhood who had been brainwashed by a once-popular cult. Although the cult is waning now, it continues to make mega-bucks from the vulnerable.

The cult was based on an infectious meme, namely, the crazy idea that ordinary mortals can somehow use "the force" to magically communicate across great distances using ordinary written messages on paper by executing certain mystical rituals such as folding the paper properly, putting it in an envelope, affixing a mystical adhesive icon, and placing the envelope in a magic box controlled by the cult.

The mystical adhesive icon, of course, is only valid if purchased from an official cult outlet. True believers think that their message will somehow travel into the hands of the designated recipient, no matter how far away they are. It's a lot like the silly notion of personal prayer to a listening God who is perhaps in another galaxy, far, far away.

I think this cult/scam has some kind of bizarre sci-fi name, something like the Universalist Pre-millennial Post-alien Supremacy teleportation service, or USPS cult, but this Post-alien "service" is often just called the Post-al service for short. You may have seen this cult operating in your neighborhood without realizing how sinister it is.

Once every week or so, this poor woman would write expressions of love or whatever to her grown-up son, and then fold it carefully according to cult guidelines and put it in a cult-approved envelope.

She would then affix the duly purchased USPS adhesive icon on the envelope. These icons often had images of beloved dead people on them, or sometimes even aliens like Yoda. Perhaps the icons represent patron saints of some kind who can help move the message on its mystical journey to places far away. 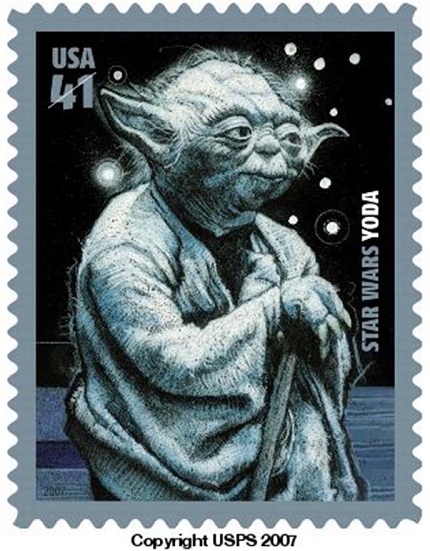 The woman would write her son's alleged location on the letter — someplace in California, as I recall — and place it faithfully in an official USPS box in front of her home. The USPS cult apparently has dozens of employees in every infected town, often driving USPS jeeps and trucks to help them collect these envelopes, creating a sense in believers that "something" will happen to their petitions.

Part of what makes this meme so effective is the other end of the cult's business model. The USPS agent that drives by doesn't just take envelopes away. He or she dumps new envelopes in the box addressed to the recipient, as if someone is trying to communicate with her. 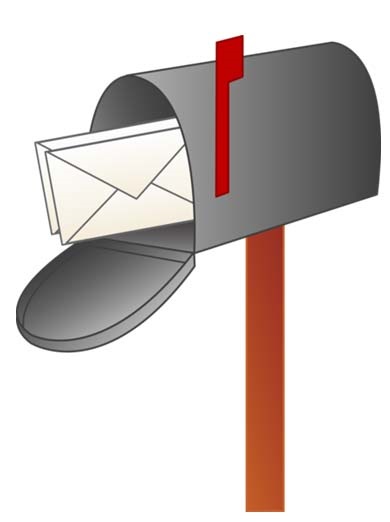 This fuels a ridiculous thought: "Wow, a miracle — I've received something back!" Of course, upon inspection, nearly all these "blessings" are requests for money or advertisements for products to buy. What a scam!

After watching her do this a few times, I couldn't stand it any longer and tried to deprogram her from this destructive, wasteful meme.

"Mrs. Jenkins, excuse me for asking, but have you ever received a letter back from your son in California?"

"Well, not exactly." Her eyes teared up. Maybe I was reaching her!

"So just exactly how do you think your letter will get to California?"

"You mean it's going to fly magically to California?"

"No, of course not, it's going to fly on an airplane."

I could hardly believe my ears. Fortunately, this was my chance to use a little logic — thank goodness for my college education. I gently asked her to think about the price of her magical USPS icon — about 41 cents at the time, a price that keeps ballooning far beyond the rate of inflation (like I said, this USPS cult is quite a scam!).

Now I asked her to compare 41 cents to the price of an airplane ticket. Even if that postal agent got the cheapest ticket possible to California, and even if he or she carried more than just that letter, even a whole bag full of similar petitions from other believers with loved ones in California, there is no way that any organization, even a legit one, could afford to buy a plane ticket to send "air mail" and still stay in business. Not when the icon just costs 41 cents.

"Mrs. Jenkins, logic proves that this just can't work. It has to be a fraud. But in addition to the logical evidence, look at the empirical results. Your son doesn't write back. Something is obviously wrong.

You have to admit that the Post-al people aren't really flying your letters to California. They aren't magically ending up in your son's hands. You've been deceived by a cult that is just a big business taking your money and exploiting your hopes."

I hoped she would be honest with herself and accept the plain truth. But she resisted, offering anecdotal evidence of a friend or two who claimed they had gotten letters back from their children. Scattered, unreliable, second-hand stories.

I asked her to come with me to the local library, where we would ask the librarian a question for which I already knew the answer: "Are you aware of any peer-reviewed, scientific studies from unbiased sources that show that letters to children sent via the USPS cult actually reach them and cause communication to happen?"

She thought about it and said that wouldn't be necessary. I was winning her over! She started to cry. I gave her an awkward hug and said, "It's OK, Mrs. Jenkins. Welcome the 21st century!" Victory!

Sadly, the next week I saw her sneak over to her mailbox and send another letter. Could have been a letter to her son. Might just as well have been a letter to Santa at the North Pole. All based on a myth. She even sorted through the pile of junk mail waiting for her to see if something might be there from her son.

So sad. How can anyone be so deluded as to believe in it and go through all those ridiculous rituals so devoid of logic and reliable scientific evidence? What a sinister group that Post-al "service" is.

Pray for Mrs. Jenkins — of course, I only mean that figuratively.