In 1886, Paul Gauguin settled sporadically in the village of Pont Aven, Western France, and gathered about him a group of artists, who became the noted Pont Aven school.

Perhaps envious of this gathering, Vincent van Gogh wrote to Gauguin two years later, proposing an association of painters to facilitate the sale of their works. Two months later he proposed that Gauguin come work with him in Arles in Southern France.

Van Gogh wanted Gauguin because of his talent. In November, 1888, in a letter he wrote to painter Emile Bernard, one of Gauguin's Pont Aven friends, he described Gauguin, "Well, here we are without the slightest doubt in the presence of a virgin creature with savage instincts. With Gauguin, blood and sex prevail over ambition."

The American biographer Irving Stone called Van Gogh "one of the world's loneliest souls." (Preface, Dear Theo, a collection of Van Gogh's letters.) Vincent dreamed of setting up a “Workshop of the South” as a community of artists. This might have appeased his loneliness. Of the artists solicited, only the "savage" Gauguin came, and even this relationship ended bitterly. 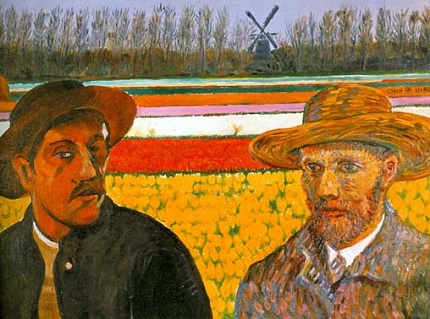 Tsing-fang Chen, Gauguin and Van Gogh. Note the images of the Dutch windmill and the tulip fields in the background, icon homage to Van Gogh’s native Holland.

Touched by this pathos, Tsing-fang Chen, whom I consider one of the two or three most important artists of our time and about whom I have written occasionally, decided to constitute Van Gogh's Workshop of the South posthumously.

As part of his ambitious project to memorialize Van Gogh with 100 paintings, Chen escorts a dozen great masters to the Dutch painter in Arles to work with him: among them Gauguin, Chagall, Matisse, Picasso, Bonnard, Mondrian, Miro, Rouault, Kandinsky, and Warhol.

Others continue to respond to the invitation.

When Chen did his 100 paintings they were exhibited, among other places, in a museum in Holland, Van Gogh’s native country.

Chen has brought Matisse inside Vincent's home (the Yellow House), quite transforming it, and giving him a servant who will prepare his food and make his days more pleasant than history records. 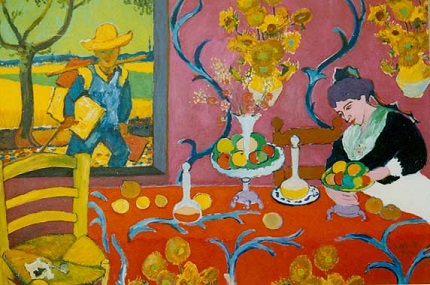 The point of departure for the painting is Matisse’s acclaimed The Dessert, Harmony in Red. The dining room is filled with circular forms and arabesques, which are emphasized by the contrasting strong angle of the window and the upright posts of the chair.

There are subtle changes to Matisse's interior. A rather prissy Victorian chair has been changed to Van Gogh's own tough, rustic one, and wallpaper flower baskets have been replaced by Van Gogh's own bouquets.

Viewed through the window, we have seen the Van Gogh figure, the painter on his way to the village of Tarascon, in other of Chen's works. When Vincent wanted to paint in the open air, he would leave his studio with a large canvas tied to his back. As he worked he would divide up the canvas into as many sections as he needed to accommodate the motifs he found, turning the canvas into a one-piece sketchbook.

Painter Emile Bernard, the friend from the Pont Aven group, said that such a canvas "was like a little portable museum, wherein were culled all the emotions of the day." (Preface, Letters of Vincent Van Gogh to Emile Bernard, 1911.)

By the time Matisse painted his Fauve masterpiece, The Dessert, Harmony in Red, he had shed all Impressionist influences. Matisse labored over the painting for a long time. When it was purchased by the Russian collector Shchukin it had a general tone of blue, but by the time the painting was delivered Matisse had entirely repainted it, so that it became a Harmony in RED.

[In a note to me long ago, when I first wrote my commentary onf this painting, Tsing-fang warned, “my reference says that The Dessert, Harmony in Red is in the Museum of Western Art, Moscow. It does not say where The Desert, Harmony in Blue is.” ]

Sometimes houseguests take over. The studio/bedroom is Van Gogh's, all right. That's his bed. He painted it in his own pictures, and that's a Van Gogh work hanging by a cord on the black wall behind the bedhead. But all the rest is Matisse, particularly the two figures.

The odalisque dominates the room — and dominates the picture and the viewer. It is only on second glance that one notes the Matisse potted plant, the Matisse paper cutouts, and the Matisse Rose Nude. One cannot help wondering what Van Gogh, a onetime mission preacher, would think if he entered the room and found her in this state of receptivity. After all, how many nudes did he paint? 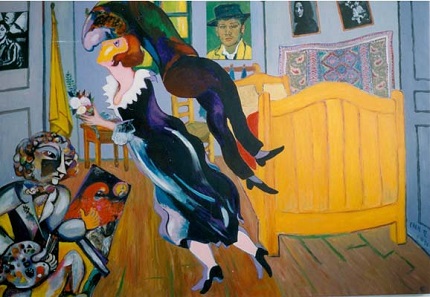 Once again, the small studio/bedroom we know so well. The color of the bed changes, and the bright red rug that Matisse put on the floor has been rolled up and taken away, leaving bare boards. The largest hanging portrait is a Van Gogh, and the chairs are his.

Chagall has come to celebrate his birthday, and either Van Gogh is off somewhere cutting another slice off his ear, or he is, we hope, forward, watching as we are, out of the picture, and enjoying the mad antics of the Russian clown, Chagall.

Chagall is also something of a Surrealist. Not even clowns have seven fingers on one hand.

Chen, playing with the intriguing possibilities of a time machine, has brought to Van Gogh an artist who rocked the aesthetic world three quarters of a century after Vincent's suicide: Andy Warhol, one of the inventors of Pop Art. 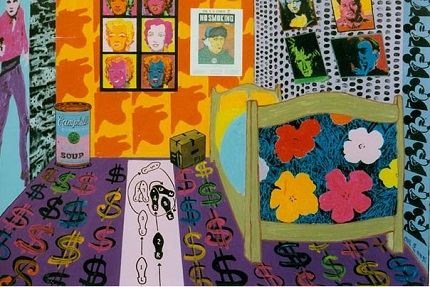 In the post-industrial, high-consumption society, everything is designed, from gas pumps to hamburger containers. Soup cans, soap boxes, movie posters, newspaper layouts, signboards, television commercials, snack packages — the list goes on and on of commonplace images that touch the eye so incessantly that the mind tunes them out in self-defense.

The Pop (for popular) artists choose these images for their art to force us to see them and acknowledge their omnipresence. Inadvertently, the artists became social philosophers — whether of high order or low order is still being debated. However, the auction market has answered that questions, with some Warhols selling for tens of millions of dollars.

In filling Van Gogh's bedroom with a composite of Warhol's icons, Chen has created a richer and more exciting painting than Warhol ever created himself. 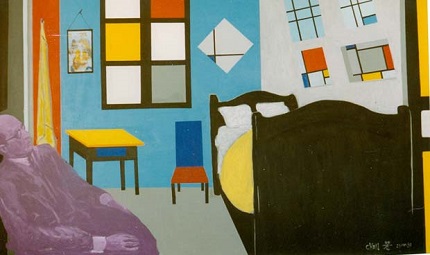 "His dedication and purity of vision have become legendary; the sequence of his works in a mature career of some 35 years constitutes the most scrupulous evolutionary progression, within the tightest margins of trial and error, of probably any Western artist in the history of painting. His aims were lofty and spiritual: he fought constantly against materialism, and he was determined that the world would benefit from the creation of purely abstract environments." (Waldemar Januszczak, Maray Beal, and Edwin Bowes, Techniques of the Great Masters of Art, Chartwell Books, 1985.)

Chen has changed the Van Gogh icons that he retained in the bedroom scene to the pure colors Mondrian used so effectively, and he has added to the composition various Mondrian icons and a photo of the artist.

Mondrian's career began in Holland and ended in America, where, because his theories could not be restricted to easel painting, his influence on commercial art was profound. 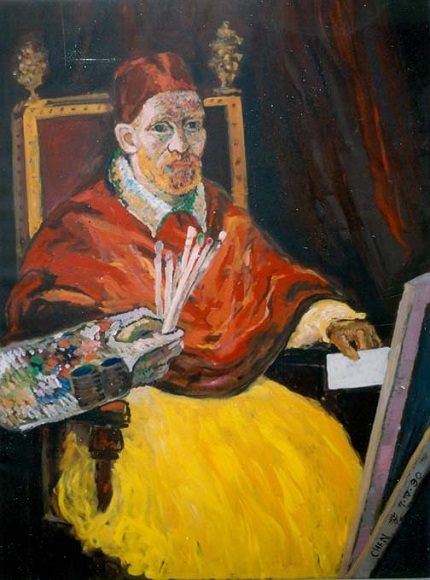 Chen takes his time machine in the other direction, back in time to bring in Diego Velasquez (1599-1660), Spain’s greatest painter of all time.

Although appointed as painter to the court, Velasquez was allowed to make voyages to Italy. On the second of these he painted Pope Innocent X, the head of the Roman Catholic Church, in sumptuous red harmonies. In voyaging from Warhol to Velasquez, Chen has gone from Pop Art to Pope Art.

Chen’s icon-switchery deposes the Pope from his religious throne and crowns the secular Van Gogh in his stead. This revisionist pope holds in his hand a check which says, “Pay to the order of Vincent van Gogh one billion and six hundred thousand dollars.” The check is drawn on the “Bank of the Whole World” and the account is held by the “Whole World Company.”

Chen means to laud Van Gogh and his contributions to art, but an irony surfaces. If the best Van Goghs in world museums were put up for auction, $1.6 billion would not be enough to buy them.

[This last commentary and several others in this “Moments in Art,” have recently been published in Taipei in The Art of Dr. T. F. Chen, The Post-Van Gogh Series. The big book also includes part of a longer essay I wrote, “Chen, Through an Historical Lens.” The written words, as with many of the books about Tsing-fang, are published with both Chinese and English texts.]