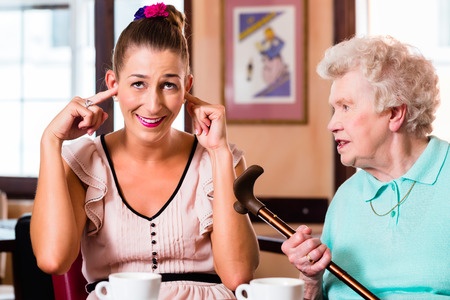 I am in the Relief Society presidency. An older sister in the ward keeps approaching me to tell me how to do my calling. For example, she wants me to email the weekly announcements earlier in the week than I usually do. I have a large family to manage, and I am already sending them out as soon as I can. This woman is really bothering me. What should I do?

A funny thing can happen when you serve in certain callings: People forget that you are a person and not a magician.

For example, when you are a bishop, some people think you have a crystal ball that reveals every problem in the ward and its attendant solution. When you are a Primary teacher, some people expect you to intuit every emotional need of the children you teach.

A Relief Society president or counselor is often expected to automatically know how every woman in the ward feels at any given time, and where the line is between intruding and showing that she cares.

Another superhuman feat expected of many people who serve in church callings is the ability to absorb criticism without feeling hurt. Sometimes the criticism is blunt: it was dumb to do this activity on a Friday, the visiting teaching is disorganized, those hot dogs didn’t taste good.

And sometimes it is couched as a suggestion: why don’t you try using the chalkboard, why don’t you use email next time, don’t you think you should get that done this month?

In your case, I think you are more bothered by this woman’s criticism than by her officiousness. If it were her know-it-all-ness that bothered you, you could simply thank her for her opinion and be done with it.

“That’s an interesting idea, Carol,” you could say. “But I prefer to send the emails on Thursday.” If she protested further you could reply, “Okay. But Thursday is the day I send them.” Her interference would be annoying, but not distressing.

You, however, seem more upset by the inherent criticism in her suggestions.

The best defense to criticism is a thick skin. But I have no idea how to develop one, so I cannot advise you on that. I can say, however, that criticism is less hurtful when you feel confident that you are doing an adequate job, and when you realize that no matter how awesome you are, someone will be dissatisfied with your performance.

Criticism is also less hurtful when you do not respect the person who has criticized you, but as that is not an entirely Christian emotion, I hesitate to recommend it.

That said, there will always be someone to criticize you. Criticism happens, and will continue to happen. Here is how you might respond the next time someone criticizes the way you do your calling.

One, turn your full attention to the person who is talking to you. Resist the urge to be defensive and put a thoughtful, “I’m listening” expression on your face. People like to be listened to. And part of your calling is to listen to the women in your ward — even the complainers.

Two, listen to what the person has to say. Behind the criticism, there might be useful information you need to know. For example, you might not know that the elderly ladies of reduced circumstances in your ward only have internet access on Tuesday when they go to the public library. If that were the case, an effort by you to do the email by Tuesday would be warranted.

You might also learn something helpful about the person who is talking to you. Our overarching concern in the Church is with individuals, and how to minister to and support individuals as they strive to live the Gospel. If you listen closely to the person who is criticizing you, you may learn something about her that will help you in your calling.

You may learn what is important to her, what she is good at, whether she is lonely or a host of other things. You may also learn what she knows about other people in the ward, which could help you fulfill your responsibilities in the Relief Society presidency.

Three, if the person is right, or has a valid point, acknowledge it. This might stick in your craw, but it leaves the person nowhere to go. “It would be nice to have those emails out by Tuesday.” “That lesson didn’t go very well.” “Those hot dogs weren’t very good, were they?”

Four, if you owe an apology, give it freely. This step doesn’t seem to apply to your case, but it often happens that a ready apology solves the problem. For example, “I’m sorry Kylee was embarrassed — I had no idea she didn’t like to read aloud. I’ll remember that in the future.” Or, “I apologize for not asking about your son’s surgery — I didn’t want to pry. How is he now?”

Yes, it may feel ridiculous to apologize for misunderstandings or things that were inadvertent. But what other choice is there? You could argue with the person about who is at fault, or be offended yourself, but that would only prolong your agony. It’s much easier to say, “I apologize.”

Five, if there is an explanation, give it kindly. You do not owe a report or formal accountability to people who are not in your chain of command, but a simple explanation might get them off your back. For example, “The Primary presidency has asked me to only have Cub Scouts once a month.” Or, “We got those hot dogs for free, and I didn’t realize they were bright pink until I opened the packages at the party. By then it was too late.”

Six, in most cases it is best to let a person say his piece. But if the complaints are running on and on, or if you are dealing with a repeat complainer, feel free to say, “Yes, I know you would like it that way. But I’m still going to send the emails on Thursday because that is the best I can do.”