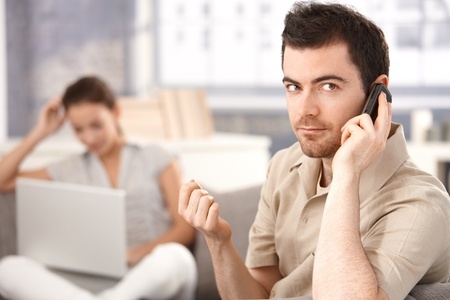 I’d like to mind my own business, but I am really concerned about my friend and my sister-in-law. Should I say something to them about what I know? Or will saying something alienate and offend them?

Marriage is a serious business. It is intended to be a permanent connecting of two people into one marital unit. However, one of the interesting things about marriage is that the physical act of getting married does not transform a person into someone new, even though the marriage itself has created a new family unit.

Each spouse is still the same person after the ceremony (and reception and honeymoon) as he or she was before. Not surprisingly, therefore, red flags that appear while a couple is dating or engaged often predict the problems that couple will have after they are married.

Or that someone will become studious, devout, thrifty, generous, trusting, well-informed, kind or industrious simply because a marriage ceremony was performed.

The decision about whether the person you are dating would make a good spouse therefore depends not only on feelings, but on information about that person’s habits, beliefs, personality, goals and expectations. A whirlwind romance might lead to decades of happiness, but it might also lead to disillusionment and unhappiness that sets in quickly after the wedding.

Thus we have the social practice of courtship, in which you see how you feel about a person over time as you actually get to know him before the wedding. Does he become more or less attractive the more you spend time together? Is her personality better or worse upon closer examination? How does he handle stress? How does she treat others (including you)?

What are his talents and gifts? What is she like when no one is watching? Do his tastes, opinions and goals line up well with yours? What motivates her? What does he hate? Can you work together? Are you similarly religious? Can you ride in a car together for fourteen hours? Do you have irreconcilable differences of opinion or habit that are insurmountable or incompatible with a happy family life together?

In other words, the point of dating is not only to find out whether you love someone and enjoy that person’s company. It is also to identify your differences and to decide if those differences are material: Are they within the range that is to be expected between spouses? Or are they too great? Are they deal breakers?

In your case, unfortunately, it is you, a third party, who has the material, potentially deal-breaking information or observation about another person’s romantic interest — information that has not shaken out of the courtship thus far.

As her friend, you have a duty to tell her what you know. I do not think you will regret the disclosure, even if your friend becomes upset or offended, and even if she ignores your concerns (which she probably will). It would be better to strain your friendship than to conceal that information from her.

You should, in advance, resolve not to be offended if she becomes upset with you for interfering, or accuses you of being jealous or not trusting her judgment.

“It’s my life,” is a childish response to a loved one’s legitimate concern, but that’s how she may respond. Instead of being angry and offended, you should maintain the friendship. If you are right about her boyfriend, she will need a friend. Don’t make her feel like she has to grovel and admit she was wrong in order to talk to you.

The situation with your sister-in-law is less clear because both of you are seeing the same behavior from her boyfriend, but she interprets it differently than you do. You see red flags everywhere, but she is not concerned. Because this situation is more subjective, I suggest you consider several things before explaining your concerns.

One, how close is your relationship? If you are close to your sister-in-law, you will have an easier time expressing your concerns to her. You will have a better idea about how to approach her on this sensitive topic, and she may be more willing to hear what you have to say.

But if you have often clashed with her, or if you don’t know her very well, she may not see you as a person who knows or understands her. She may even assume an unkind motive. Your opinion will matter less to her, and you will have to approach any conversation more carefully.

Two, are your concerns about his personality or about his bad behavior? If you know that he defaulted on seven credit cards, or has a criminal record in Nevada, or was disbarred for stealing money, by all means, speak up. Those are concrete acts about which you can say, “Marianne, did you know there is a $40,000 judgment for unpaid child support against John in Ohio?”

But if you object to his personality alone — he’s not funny, he’s insensitive, he’s too sensitive — you should tread more lightly. Everyone has personality flaws, and his might be a good match for hers.

Three, how will you approach the subject? This is not the kind of conversation you should wing. You need to think concretely about why this man bothers you so you can describe, diplomatically but clearly, your concerns should the chance arise.

You can’t just blurt out that he’s weird. But you can ask questions like, “Marianne, aren’t you worried about why he’s been divorced twice already? He’s only 25. If it were me, I’d want to talk to his ex-wives.”

Your sister-in-law might make it easy for you and ask for your opinion. If she does, you might begin by saying, “Here is what I see,” or “Have you thought about ...,” or “John is an engaging person. He’s fun and cheerful and active. Still, I would be concerned that ....”

Keep your tone measured and thoughtful, as if you were not desperately worried, so as to minimize the need she may feel to defend him.

Four, has it already been said? In many such situations, the person who has chosen an unsuitable partner has heard about it, loud and clear, from his or her loved ones. If you know that your parents-in-law have discussed their concerns with your sister-in-law at length, you might decide that your unsolicited opinion either is not necessary or would actually hurt the situation.