After Daniel-Henry Kahnweiller informed his rich London uncle, Sigmund Neumann, he was not going to accept a posting to the family's gold business in South Africa, he packed up, ready to flee back to Paris intent on becoming a picture dealer.

Although the young married man had honed his eye by spending long hours in museums and had bought a few reproductions and drawings, he had no practical experience in the art trade.

How steep would the learning curve be?

If not exactly approved, picture dealing as a profession was not unknown to the Neumann brothers. They had bought 18th Century portraits by Gainsborough, Reynolds, and Lawrence from a merchant named Charles Wertheimer. Daniel-Henry considered these paintings little better than modish engravings. He detested them.

"That's all very well," Sigmund nodded calmly, "but it's still necessary that we look into this more closely. You will go see one our friends, and he'll give you an examination."

Wertheimer was as uneasy about the confrontation as Kahnweiler but could not very well refuse the uncle's request.

"What do you like at the National Gallery?" the interrogation began.

"What I like is El Greco." El Greco was just coming out of obscurity and held only a minute fraction of the esteem he radiates today. "And Vermeer of Delft." Daniel-Henry had dropped another obscure name, virtually unknown at the time.

"Of course, of course," Wertheimer stumbled, trying desperately to gloss over the embarrassing follies of youth. "In Paris, then, what do you intend to sell?"

It was a risky question begetting a risky answer. French painters later than Delacroix were scarcely known in London. Of the Impressionists there had been only one exposition, and it in the tiny New Gallery.

Kahnweiler thought: If I speak of painters I really believe in, he won't know them. Has he heard perhaps of Bonnard or Vuillard? Instead, Kahnweiler answered, "I don't know. I don't know."

"Wertheimer was the kind of art dealer," Kahnweiler later recalled, "who furnished buyers the kind of merchandise they wanted. Me, I wanted to be the kind who offered for public admiration paintings which the public knew absolutely nothing about and for which it would be necessary to blaze a trail."

The interview was not long. Throughout, Kahnweiler stubbornly resisted all opportunistic temptation to give the decadent picture dealer answers the interrogator wanted to hear. "I don't know what demon had seized me."

Wertheimer's report to Uncle Sigmund could not have been very encouraging.

The Uncles decided. "Here's what you are going to do. You will go to Paris. You will open a gallery because that is what you want to do. We'll give you Ł1000 and one year. If after a year this gallery has taken hold and you and your wife can live off it, you may continue. If not, you will come back to our profession."

The Kahnweilers returned to Paris on 22 February 1907. That first part of their probationary year was lost while they searched for a place to live and a place to do business.

The first need was filled when they found a small sixth-floor walkup at 28 rue Théophile Gautier in the southern half of the tony 16th arrondissement. In those days they had a good view across the Seine to the Left Bank.

Behind the Madeleine cathedral Kahnweiler encountered a Polish tailor who had a small, failing boutique at 28 rue Vignon. The place cost the tailor 1800 francs a year. He was overjoyed to sublease it to the would-be picture dealer for 2400. It was scarcely 13 feet square.

So, Kahnweiler, 24, was ready to sell pictures -- except that he didn't know a single other dealer, or a collector, or a critic, or even a painter. He didn't even have a picture to sell.

When the Salon des Indépendents ("no juries, no awards") opened on March 21, all the artists who might have mattered at the time, except for Picasso, were represented among the hundreds of paintings displayed.

Walking slowly from picture to picture and room to room, Kahnweiler examined the exhibition offerings carefully. The majority of pieces were hard on the stomach, but the Fauves movement was at its peak. The new dealer confidently picked out paintings by the very young André Derain (1880-1954) and Maurice de Vlaminck (1876-1958). 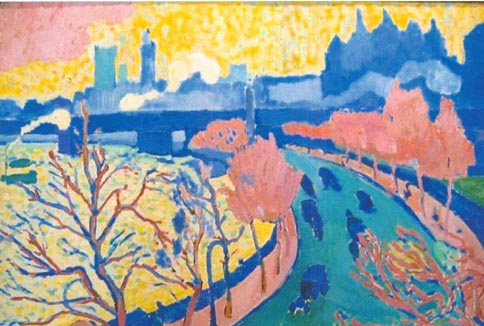 The secretary of the Salon quoted him prices, which Kahnweiler immediately agree to pay, not realizing that all Salon purchasers invariably bargain for lower prices, or that as a dealer he had an automatic claim to a reduction.

Kahnweiler could not take possession of his purchases until after the Salon closed. When Derain and Vlaminck delivered their paintings to the Kahnweilers' apartment in April, the young dealer met living artists for the first time in his life. 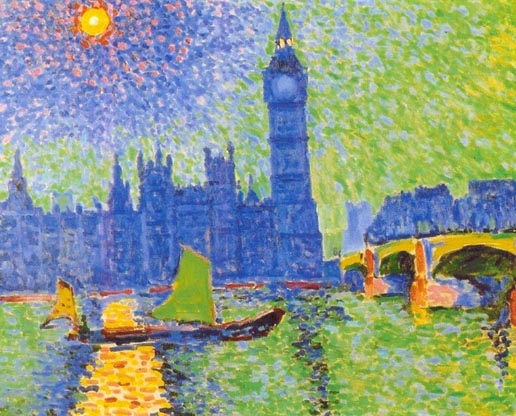 After the encounter, Vlaminck informed Vollard, who had been his dealer, "Kahnweiler wants to buy my entire production."

"Accept it," Vollard counseled. "It will spread your work."

The canny Vollard knew if Kahnweiler were successful this would make Vollard's stock of Vlamincks worth far more.

Concluded Vlaminck (in a letter written later to Derain): "That's how a young German of 25 [sic] managed to come into possession of pictures of the greatest French painters of the time."

From the Salon Kahnweiler added Van Dongen and Braque (an excellent dancer of the jig, an excellent acordian player, and a solid boxer"), giving him four exceptional -- though hardly recognized at the time -- painters to hang in the Gallery Vignon.

When the gallery opened for business there were no cocktails, no press parties, no swag bags, none of the commercial trappings and entrapments of today, and until 1914 Kahnweiler never spent a sou on publicity.

That first day he simply raised the iron curtain protecting his front window, and he was in business.

His first client was one of his closest friends, Hermann Ruph of Berlin. The pair had lived in the same rooming house for a year during the Tardieu days (see last week's column). His second sale was to the rich Roger Dutilleul, who, like Ruph, would buy many paintings under Kahnweiler's tutelage.

Another early wealthy client was Serge Stchoukine, who bought heavily from Kahnweiler and others and established the biggest collection of modern works in all Russia.

Kahnweiler's first friend among art writers was Wilhelm Uhde, a German who had come to Paris in 1900 and who spoke to him about a strange canvas Picasso was working. It had a mysterious air about it. Although Kahnweiler was familiar with the Picasso drawings sold by Clovis Sagot, a courageous and poor old merchant on Rue Laffitte, he did not know Picasso and was shy about making cold overtures.

Into the gallery one day scrambled a short, thickset, badly dressed young man whose tattered slippers were layered with dust but whose raven hair and volcanic eyes gave quite another impression. He looked about the gallery silently and left. The next day he came back in a fiacre with an older, heavyset, bearded man. The two looked about without a word to Kahnweiler or each other and left.

Out of earshot the older man remarked, referring to Kahnweiler, "He's so young no doubt his parents have given him the gallery as a present for his first communion." The sarcasm was typical of dealer Ambroise Vollard.

A few days later Kahnweiler resolved to follow Uhde's advice and storm Picasso's studio at 13 rue Ravignan, in a decaying building of wood and glass dubbed the Bateau-Lavoir by Poet Max Jacob, who lived there, because it resembled the old boats which were then still on the Seine and in which Paris women did their washing.

The building was dug back into the flank of Montmartre and didn't even have a concierge. The concierge next door told Kahnweiler to go to the first floor down.

Whom should he find there but the silent young caller at his gallery: Pablo Picasso. The studio, which he shared with his beautiful Fernande and a huge dog called Fricka, choked with depressing misery: wallpaper hung in ragged strips from walls to ceilings, a mountain of caking lava cinders grew by the side of the stove, asthmatic dust blanketed his drawings, and rolled canvases buried the caved-in divan.

Conspicuous was the enormous canvas described by Uhde: Les Demoiselles d'Avignon, Picasso's first important Cubist venture and a subject matter inspired by several ancient Iberian heads that Géry Pieret, the secretary of his friend Guillaume Apollinaire, had stolen from the Louvre.

Says Kahnweiler, "What I want you to understand immediately is the unbelievable heroism of a man like Picasso, whose moral solitude in this period was something terrifying, because none of his painter friends were following him."

Braque declared "that it appeared someone had drunk gasoline and spit on a fire," and Derain prophesied Picasso would be found one day hanging behind his great canvas, so much was he dispirited.

The conversations of this first confrontation are lost to memory, but Kahnweiler did express his enthusiasm for all of Picasso's work and praised Les Demoiselles, though it is not likely that he genuinely understood it at the time.

Kahnweiler purchased some Picassos and thereby became virtually the only source of support for the Spaniard. The painter was too distrustful to agree to any written contract, such as Kahnweiler had executed with Derain and Vlaminck, even though no one else was bidding for his work. Vollard's interest in Picasso had eroded.

Prices were not high. Said Picasso, "In order for pictures to sell for high prices, they must be sold at very great bargains at first." He meant it, but there was considerable rationalization in the remark.

Kahnweiler bought low and had to sell low. No one was making much money, but at least they kept a breath ahead of abject poverty.

Although Kahnweiler found four of his five artists in the salons, as -soon as he began buying them he forbade their further exposures in these competitions. Nor did he give them one-man expositions in his tiny gallery. He let his painters live tranquilly. When they needed money, he gave it to them. When they finished a painting, he hung it.

Anyone who wanted to see what the painters were doing was obliged to come around. Each man probably had no more than five or six active followers, but this afforded a working base upon which Kahnweiler could build. It was enough so that Kahnweiler never had to undergo any second conferences with his Neumann uncles to defend himself against suggestions that he had failed his trial and should return to the family fold. 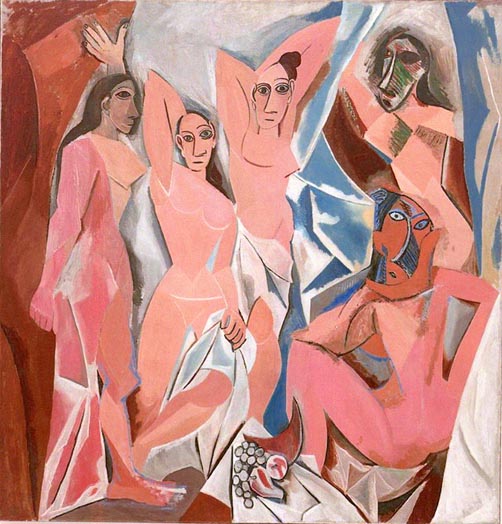