The children will likely have meltdowns just after you leave the reptile house, somewhere between the big cats and the penguins, which is long after you passed the last clean bathroom hut (that they refused to pee in, thank-you-very-much), but is now an urgent part of the reason they're screaming and crossing their legs.

When you finally see an animal that acts like it's happy to be on display, you very much want your kids to notice said animal and get excited, too.

On this fateful trip to the zoo, the excitement-inducing exhibit belonged to a family of gibbons. If you haven't had the pleasure of seeing a gibbon fly through the air you are missing out on a delightful life experience.

As we watched, these lithe primates flung themselves effortlessly through elevated mazes of ropes and chains, making the Energizer Bunny look like a wind-up toy. The youngest of them pinballed up and down the two story enclosure, treating the walls like trampolines.

I even began to fancy myself more energetic after seeing them move, and that's saying something for a pregnant woman trapped in a humid summer.

Since the gorillas were asleep (they usually are when we go to the zoo, and in fact seem to be very laidback primates on the whole) the gibbon family was drawing quite a crowd. The crowd was mostly full of school children in matching t-shirts, pressing toward the glass for a better view.

One of my daughters became irritated, not seeing what everyone else was so fascinated with even though the gibbons were launching themselves just above her head. I scooted her a bit to her right -- a position that I thought would give her a clear view.

Suddenly, the older of the two gibbon brothers leaped from a platform and waited until just before he hit the ground to throw out his long arm and catch a dangling rope. Audible gasps sounded, as did the growl of an angry, left out three-year-old. She still hadn't seen anything.

Pointing to the youngest ape, I said, "Look up. Look at him go!" thinking that maybe she hadn't noticed the movement that was up so high in the habitat.

My daughter looked in Every Single Direction but the one my finger was solidly pointing at.

I tried again, and she tried again, with the same results. We were both getting frustrated but my frustration actually made sense to me.

Really? Do the long arm and pointing finger mean nothing? Okay, I figured, I'll just crouch next to her and run my arm, starting with the tip of my finger, past her face at eye level.

She's bound to get this.

I bent down, put one arm around her little shoulders, and pointed for the last time. But when I followed my own finger all I could see was little calves, rear ends, and elbows -- all humanly opaque.

There was no way she would ever see the gibbons because she had obstacles in her line of sight that I didn't have in my own. I thought she was close enough to the window to tip her head back and see what I saw, but that wasn't the case.

Thankfully, this was quickly and easily remedied. I scooped her up in my arms. Her distress vanished when I was finally able to show her what I had wanted so badly for her to see. She watched the gibbons for a while and then we moved on.

Without my help, my daughter couldn't possibly have seen what I saw. She was physically incapable of doing so, and frustrated about it. How often do we become frustrated when we, from our mortal and earthly position, cannot see through heaven's eyes?

Sometimes it feels as if we are spiritually incapable of seeing with a higher perspective. There are likely obstructions to our view, mostly opaque ones, which leave us wondering why we are trying to see anything at all.

Our Savior, who has "descended below all things" (D&C 88:6), knows personally what is blocking our way and can help elevate us above the mess of distractions and obstacles.

If we are willing, our loving Heavenly Father will lift us higher until we are able to see with a clear perspective everything He wants us to see.

"For as the heavens are higher than the earth, so are my ways higher than your ways, and my thoughts than your thoughts." Isaiah 55:9 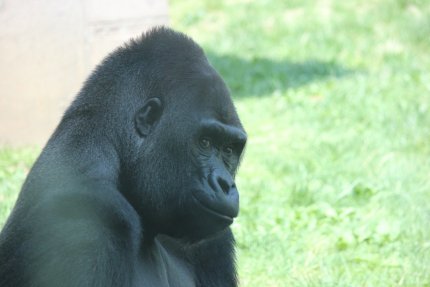 That smile -- he obviously knows something that I don't. Probably the secret to life, the universe, and everything. (Photo credit: Arlen Michael Card)