Recently as I was about to begin the 40-minute journey home from a priesthood training meeting for the Shanghai International District, I had a puzzling phone call from my wife. She was on her way to People's Square in downtown Shanghai to meet a Chinese-speaking stranger who had called her.

The man told her he was trying to reach D., giving the full name of an American woman my wife had just met at sacrament meeting the previous week. He said he had D.'s passport and wanted to return it.

That sounded crazy, but my wife called our remarkably well organized Relief Society president, who was able to track down D.'s phone number, and Kendra was then able to call D. and verify that her passport with her whole wallet had just been stolen that day at one of Shanghai's most popular attractions, Yu Garden.

My wife called the man back, and asked him to wait as she and D. got together and took a taxi to People's Square in hopes of getting the stolen passport back.

A lost or stolen passport in a foreign country can be a real nightmare. American passports are a real prize for thieves, having a street value (so I've heard) of more than $5,000. For those of us living in China, replacing the passport and visa once stolen can cost almost that much as it will require two trips outside of the country and some significant fees. It can completely disrupt your plans and make a mess of things instantly.

We experienced this when my wife's passport was lost or stolen on the streets of Shanghai a couple years ago. We don't want that to happen to anyone else, so we were anxious to help D. get hers back, if possible.

D. had just come to Shanghai for a few weeks. At church, my wife had introduced herself and gave D. her card, which she had placed in her wallet. My wife's card was the only thing in the wallet with a phone number on it.

When I learned what was happening, I volunteered to come to People's Square also, already being a little closer than she was. The man had already been waiting for some time and we didn't want him to give up and leave before someone could meet him and discuss the passport.

At the same time, I worried that it might be a scam. In any case, I wanted to be there to help.

I arrived first but there was no sign of the man. My wife and D. came later. After calling him again, we finally managed to meet. He was skinny, too skinny in my opinion, possibly from working too hard and eating too little to save money for his distant family.

To our surprise, he wasn't asking for some huge sum of money. He simply handed D. her passport and told the story of how he recovered it. He had spent around four hours trying to get it back to its owner.

The man is a worker from inner China. He was at Yu Garden when he saw a group of children he identified as being from Xinjiang Province (a poor western province) surround D. begging for money. She kindly took some cash out of her wallet and gave it to them.

As she put her wallet back in her bag, it was visible and unshielded for just a moment, long enough for one of them to snatch the wallet and run off. The man saw this happen and chased after the kids.

He saw them pull the cash out of the wallet and then throw the wallet against a wall as they rushed away, possibly unaware that they were discarding a valuable passport. On the other hand, if they were caught, the passport would be clear evidence of theft, so maybe they or their managers view passports as too risky.

The man retrieved the cash-free wallet and then began the process of finding its owner, who apparently was out of sight by now. His only clear lead was the card with my wife's name and number.

He spent a big part of his day working and waiting to get the passport and wallet back to their owner. He asked for nothing, but we could sense that this was a man living a frugal life who could use a cash reward, so we urged him to accept some cash. We were glad he accepted it.

I asked him why he would do so much to help a stranger get her wallet and passport back. He explained that he is Christian, and that he felt that Chinese people needed to show kindness toward foreigners. He talked about that principle at length.

God bless him for being honest and for having compassion for a stranger who was about to have a very bad day if he did the easy thing and didn't get involved.

A fear of being involved is one of China's major problems, in my opinion. Many people tell their kids to just walk away and stay out of trouble instead of getting involved when they see strangers having problems. That attitude has led to some terribly embarrassing incidents that have shamed millions of Chinese people. I'm glad this man responded to a higher law.

Thanks to one man's compassion and patience, an American woman's stolen and discarded passport was returned within a few hours of its loss, and a nightmarish situation became a cause for gratitude.

Had my wife not given D. her card that was kept conveniently in the wallet for the Chinese man to discover, he would not have reached D. through us. Had we been out of town, as we often are, we might not have been able to help.

Since D. does not speak much Chinese, some help was needed. It was also a real blessing that the Relief Society president was able to track down D. rather quickly.

We get lots of odd calls in Chinese from strangers and often conclude that they are salesman or scammers, so we often just say "Not interested" and hang up promptly. It was yet another blessing that my wife took the call seriously and could understand the man, thanks to her steady diligence in studying the language.

Although many people might choose to not get involved, many Chinese people share the compassion and honesty exemplified by our new friend. Christians don't have a monopoly on such traits, but we were pleased to learn that he was Christian. He was living up to the ideals of his religion well. I hope we can all learn from his example. 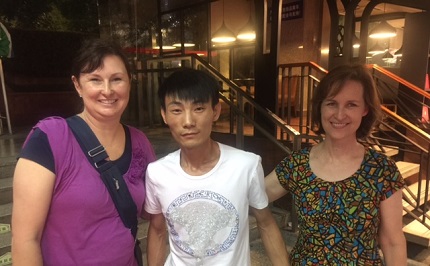 D. on the left, my wife on the right, and the kind Chinese man who spent a big part of his free time on a Sunday returning D.'s passport.