Back about 1970, I had not yet met Albert Riera, an artist whom I would represent in the United States, but I expected to sit in a sidewalk café with him in Paris and share a long, savory French lunch.

At 71, he was a mature artist. His friend Nat Leeb, the artist I wrote about last week, said, “If Albert Riera is less celebrated than Maurice Utrillo, his paintings have no less quality.”

But somehow a Utrillo-esque reputation had not spread to this side of the Atlantic.

A painter with a pen, he wrote in an intimate, self-revealing style that was rich and beautiful. He had been an actor: vaudeville in the provinces, Ibsen in Paris. But above all, he was a painter, and when he could not paint he underwent severe pain. That is a familiar syndrome. My youngest daughter, Anne Bradham, a watercolorist, suffers it.

Riera painted the narrow streets, the modest shops, the huddled houses of great cities: Paris, London, Lyon. He was an intimate painter; his oils were small and jewel-like. He said to me, “There is a latent gaiety in the poorest and saddest streets of the great capitals.” 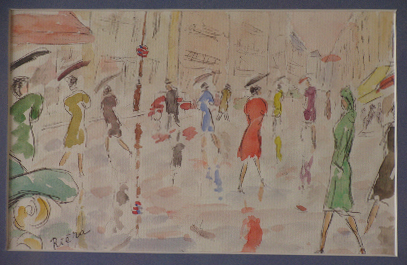 Poverty and boredom forced him out of art school. He got a job in an office and was fired when the boss caught him doing deep-knee bends after all the assigned work was done. So he got a job as a girder rigger in a shipyard, and he sang brazenly from the high steel ribs. Result: he was admitted to theatrical school.

Yet at every moment he sketched: in the subway, on trains, before the theater, in the loges, in the wings. Systematically he tore up everything. A friend from his old art school who had become a professor of design found some of the sketches and spirited Riera away to meet Jules Pascin (1885-1930). Pascin had already won his painter’s fame.

Pascin said to Riera, “I must counsel you not to paint. It is a terrible profession. But you will paint anyway because you are a true painter. So I can only tell you to work hard but work alone.”

Riera worked hard, and by 1929 had a lucrative contract with a Paris gallery. The Crash ended it.

By the time I met him, Riera had a résumé as distinguished as the colors of his oils. He listed 26 ways he had followed to make his living, but 25 of them were always on the side, with painting his continuing occupation.

For livelihood, Riera became a byline journalist. Then he found a place in the theater again. On radio he created a character named Isidore for a program called “Bar of Stars.” It swept France, like “Duffy’s Tavern” did in the United States. 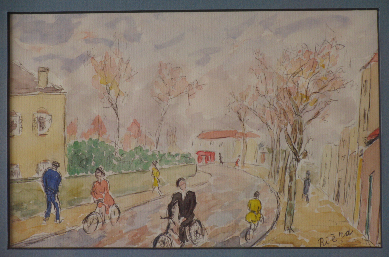 His list of credits from pre-Crash 1926 to 1965 was long and included the Paris Museum of Modern art shows with regularity.

French critic André Warnot wrote, “Riera is a poet, a poet with colors who composes small poems about the streets of Paris, about the perspectives of Lyon with its red tramways and the silhouette of Fourvičre in the fog, about Place Messina in Nice, all rose with its frilled carriages.”

Results: hundreds of canvases sold to collectors and a dozen to the French State, but more important, he led a busy, happy, many-faceted, fulfilled life.

One of the great benefits of a French lunch is that it can last for hours. Ours did.