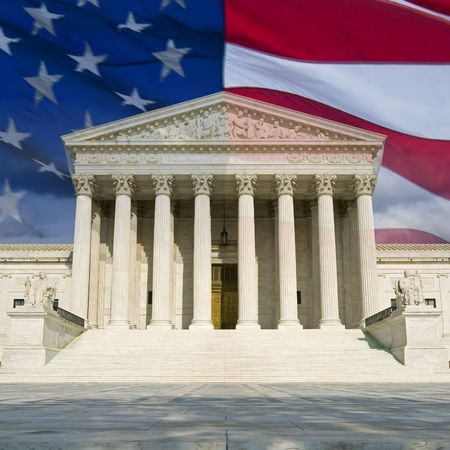 I hope as things settle out in the country after today's SCOTUS decision on gay marriage, that you will take the time to read the entire group of Supreme Court opinions for yourselves -- the majority decision and the dissenting opinions.

It's 103 pages long -- it took me about 2 hours to read it all. But it's important as a citizen of this country to understand how government works and to think about the changes that may impact your lives.

I won't live to see all the implications of today's decision in our society and our country. But you will, and it is important that you understand for yourself all the issues presented here as you watch the results unfold.

I saw what the paragraph below cautions about the play-out following Roe v. Wade. That decision came in 1973, when I was in college. It was the first complete Supreme Court decision I remember reading. This is a quote from the Roberts's opinion:

"As a thoughtful commentator observed about another issue, 'The political process was moving . . . , not swiftly enough for advocates of quick, complete change, but majoritarian institutions were listening and acting. Heavy-handed judicial intervention was difficult to justify and appears to have provoked, not resolved, conflict.' Ginsburg, Some Thoughts on Autonomy and Equality in Relation to Roe v. Wade, 63 N. C. L. Rev. 375, 385-386 (1985). Indeed, however heartened the proponents of same-sex marriage might be on this day, it is worth acknowledging what they have lost, and lost forever: the opportunity to win the true acceptance that comes from persuading their fellow citizens of the justice of their cause. And they lose this just when the winds of change were freshening at their backs."

Some of the new challenges that the country will face in the coming decade are discussed here by Roberts:

"Respect for sincere religious conviction has led voters and legislators in every State that has adopted same-sex marriage democratically to include accommodations for religious practice. The majority's decision imposing same sex marriage cannot, of course, create any such accommodations. The majority graciously suggests that religious believers may continue to "advocate" and "teach" their views of marriage. Ante, at 27. The First Amendment guarantees, however, the freedom to "exercise" religion. Ominously, that is not a word the majority uses.

"Had the majority allowed the definition of marriage to be left to the political process--as the Constitution requires--the People could have considered the religious liberty implications of deviating from the traditional definition as part of their deliberative process. Instead, the majority's decision short-circuits that process, with potentially ruinous consequences for religious liberty."

And this may be the most important concern you should watch for in the coming decades. From Alito:

"Today's decision will also have a fundamental effect on this Court and its ability to uphold the rule of law. If a bare majority of Justices can invent a new right and impose that right on the rest of the country, the only real limit on what future majorities will be able to do is their own sense of what those with political power and cultural influence are willing to tolerate. Even enthusiastic supporters of same-sex marriage should worry about the scope of the power that today's majority claims."

So, you guessed it, I'm on the side of the dissenters in my concern for the process that was used. But I'm not writing this to tell you what side to be on. It doesn't really matter at this moment.

What does matter is this -- I'm writing to truly urge you to be a person who understands history so that you can watch it unfold in the coming decades of your life with some context. It's not enough to either cheer or mourn a decision like this. In order to be a real citizen you must also understand all aspects of government for yourself. And be able to put future decisions of the country in historical context. You are living through it; make sure you are a real living part of knowing what it means.

I won't be here to see the effects forty years from now -- but I am able to see the trajectory of our country's history for the past forty years that I've lived through as an adult. And it makes a difference to me in my life, at least, to understand it as much as I can. Be sure you can, too. You won't come back and read this decision in forty years, so take the two hours now so you are part of the informed citizenry. Make it a habit to not just take what others say or the competing media and political spins as truth. Dig in deep yourself every time.