I sit on a bed bolted to the floor. In the doorway people pace up and down the hall — endlessly. No activities. No television. No books. There is absolutely nothing to abate the boredom.

Fifty men and women crammed into a building with only two showers. Screaming, swearing, crying, moaning and wild laughter ring though my room, echoing off the bare walls of the singular 100-yard hall of the locked and forsaken residential care facility. Welcome to 13 months of my life.

At this facility I get in trouble for being diligent in scripture reading. I guess the staff had never met a Mormon returned missionary, preferring instead to write “religiosity” in my progress notes. But with nothing else to do, occupying my mind is difficult at best and when my scriptures are taken away, I turn to daydreaming of who I will become — a published writer with a master’s degree.

I determine to become an advocate for people like me. Someone who would show people that living successfully with mental illness was possible. It is a joke, really because at that point in my life, I am not sure how to do it myself. However, when I discover the secret, I vow I will shout it to the world in an effort to alleviate others of enduring an equally miserable existence.

Staff frequently checks in on me, for progress purposes. Truthfully, I’m not sure what kind of progress they expect since there isn’t group therapy, psychoeducational classes, recreation or anything by way of treatment other than medications.

This “care” facility doesn’t care about all the puzzle pieces. Instead they act merely as a warehouse to keep people safe and contained while stored away until a doctor finds the right cocktail of medication.

When staff questions me about my progress, I frequently talk about my dream of becoming an award-winning author with a master’s degree. The master’s degree is vital because my grandma had promised me one of the awe-inspiring tramme needlepoints she’d completed if I got married or got my master’s.

Since I couldn’t fathom anyone ever wanting to marry a young woman living with schizoaffective disorder (bipolar type with catatonia), I figured the only way I’d qualify for such a priceless heirloom was to get my masters. As far as I was concerned, receiving one of Grandma’s needlepoints was basically an unachievable, grandiose dream.

The psychiatric support staff watch as I grow tired of waiting in a two-hour line to take a shower, pick at my food because the cooking staff gave me the 5th peanut butter sandwich in a week as an effort to appease my vegetarian diet, incessantly read scriptures and do anything out of sheer boredom, short of repeatedly slamming my head in the wall.

As far as the care center staff is concerned, the possibility of my actual graduating with a master’s degree seems far-fetched. In fact, according to the staff, it’s downright grandiose.

Day after endless day, staff members try and talk me out of my daydreaming about academia and receiving a Pulitzer. Actually, they flat-out tell me that success is impossible because if I do ever get out of that institution, I’ll stress myself out in the mere effort of taking a semester’s worth of classes and wind up back in their “care.”

They command me to stop setting unrealistic expectations for myself, telling me that doing so will just set me up for failure. Oddly, failure doesn’t mean ending back in their facility (I sure thought it did). Instead, failure constitutes trying, and not achieving my goal. I suppose they don’t understand the concept of trying, failing, learning from my mistakes, building on my strengths and trying again. Who runs a marathon on their first try?

Actually, I don’t want to sugar-coat things. My expectations are unrealistic given my situation. The staff has a point. Before I finding the gateway to recovery, I had applied and been accepted to three different graduate programs. I started one, not having a wellness toolbox filled with coping skills, and ended up catatonic partway through the first semester. Fail!

I made it just past the deadline for dropping, ending up with a hefty student loan. Fail! After being accepted into the second program, the excitement triggered a mixed mania that left me debilitated and in that nasty institution. Fail.

Yes, folks, I was surrounded by failure. I did a great job of reminding myself how much of a failure I was, so did my voices. To top it off, I was surrounded my mental health professionals who referred to my failures as evidence of what wasn’t possible in my life by labeling my daydreams as “grandiose ideations.”

Truth be told, given my track record, it was easy to see that the pattern hadn’t changed. Talk about fostering hopelessness. Why not just dump me off in some quicksand next to a fire ant hill? Struggle will make things worse. Why try?

Finally, after repeatedly falling short of my own expectations, let alone that of my family and mental health providers, their logic makes so much sense that I become a victim of my illness. I play the victim card well, believing I can’t help anything.

Believing that regardless the efforts I make, my illness can’t get better because according to the doctors I have a deteriorating condition where each episode creates less and less capacity of living independently. I resign myself to living in a group home. I fight desires to change my situation out of the desperate desire to avoid getting worse.

A weird thing happens. I keep getting worse, despite my efforts to just stay in some kind of maintenance. I truly am drowning in quicksand, surrounded by well-meaning staff who only want to preserve what little dignity I have by deflating my grandiose ideas. Staff are unwilling to carve my grandiosity into manageable, bite-sized pieces.

One day I decide I’ve had enough. A failure in the eyes of so many — including myself — I figure life can’t get worse. I decide to figure out how to leave my failures behind and realize my grandiose ideations.

I speak with everyone I knew about how recovery happened. I have learned that recovery isn’t an occurrence or a destination, but rather a journey through failures and unachieved goals where the person behind the wheel learns from past road blocks how to build bridges over future ones so that the recovery journey can continue.

Recovery means using my personal characteristics and strengths to better myself and achieve my dreams — regardless of how grandiose they might appear to others.

Once I make that realization, I search out peers (other people living with severe mental illness) with whom to brainstorm wellness tools in an effort to lessen or entirely avoid roadblocks which used to trigger decompensation, resulting in failure. Little by painstakingly little, I begin moving forward in recovery.

I break down my grandiose unrealistic expectations into small, realistic, stair-like tiers. To those who call me grandiose, I reply with something about their limited view of a humans’ eternal potential.

Ultimately I earn two of Grandma’s prized needlepoints for achieving two seemingly grandiose events: graduating with my masters and marrying my best friend. Now that those two events are now in my rearview mirror, I wonder what’s next. Good thing I have my ever expanding wellness toolbox and travel companion. Together we can achieve “grandiose” heights. 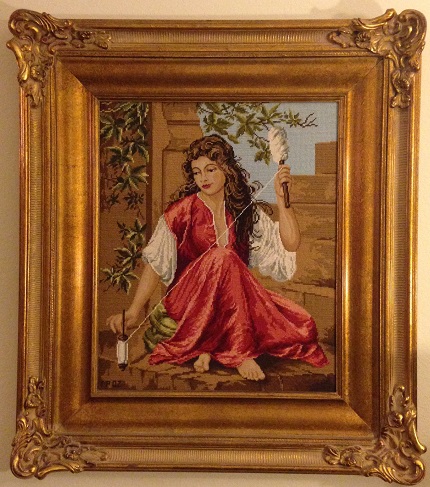