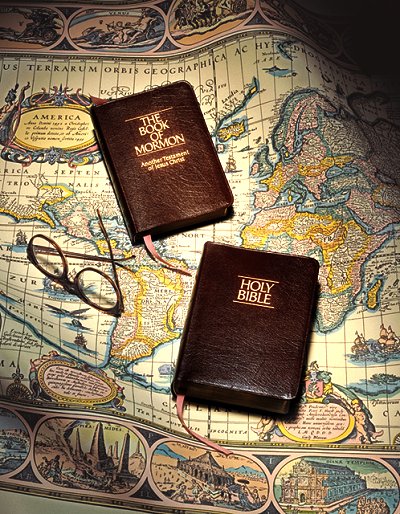 Some critics in their mocking of the Book of Mormon like to trash its literary value. It's true that the Book of Mormon was not written by people whose goal was to write epic poetry or great literature. It was written to teach us, remind us, and help us repent and come to Christ.

But for those very few outsiders who take the book seriously enough to read and analyze the text with a desire to learn and explore, there are great treasures, even treasure of literature.

However, the Book of Mormon has its share of problems for modern readers. There's the KJV language with archaic structures and way too many "and it came to pass" phrases, even more than the Bible has, but with an abundance similar to the actual Hebrew text. Though the archaic language has its purpose, it adds to the difficulty and even tedium of reading.

It is not as tedious as reading some widely accepted great literature like the Old Testament itself, which, while it has many moments of great beauty, seems to get bogged down in lengthy descriptions of decorations on the tabernacle, genealogies, and other details that require a lot of determination to slog through.

My first time reading it was a surprisingly painful chore, definitely more challenging than what I encountered in the Book of Mormon.

The literary value of the Bible is widely accepted, partly, I feel, because it has been subject to so much analysis and discovery by people willing to take to seriously, whether they believe its theology or not.

Outsiders looking at the Book of Mormon face a different hurdle. To take it seriously and analyze the complex text with any degree of intellectual effort almost implies the book might somehow be more than what "everybody knows" it is: a ridiculous forgery by an unschooled farmboy that somehow manages to still fool some of those Mormons after all these years.

To view it through the lens of literature and apply the same kind of tools that are used to dissect the Bible, Homer, and Shakespeare would surely be pointless, in the minds of many, and thus many valuable insights are never recognized.

In "The Coming Forth of the Book of Mormon in the Twentieth Century" (BYU Studies, vol. 38, no. 2, 1998), Noel Reynolds reports an early effort of his to see how non-LDS scholars might react to the text when encouraged to give it a chance.

I organized a small private conference of mostly non LDS scholars that included both historians of American religious history and other text oriented disciplines, with certain questions of political theory as the subject and the Book of Mormon as the text for discussion following the three day meeting of the group in September 1997.

One of the participating historians wrote the following letter to the Indianapolis-based sponsoring foundation:

Thank you so much for including me in the Liberty Fund conference on "Personal and Political Liberty in the Book of Mormon." The Liberty Fund is to be congratulated for having the imagination and courage to sponsor a conference on this subject, which was fully vindicated by the outcome.

Having taught the history of religion in the United States for some time (nineteen years at UCLA and six so far at Oxford) I was of course familiar with the Book of Mormon to some extent, and had read a good deal of it.

However, I confess that it had not occurred to me that the text would bear the kind of close analysis to which our group of philosophers, political scientists, literary and historical specialists subjected it. My teaching and writing in the future will benefit from the enriched appreciation the seminar gave me for this complex and inspiring work….

Professor Howe's observations are consistent with the verbal comments of the other participants. Such responses indicate that historians can learn a great deal from intensive textual analysis of the Book of Mormon and that there might be reason to hope treatments of Mormon history in the future will pay more attention to the book's unique and complex content.

Reynolds' experiment with its refreshing result came almost three decades after a non-LDS scholar lamented the neglect that the Book of Mormon has received among students of literature. Writing in 1968, Dr. Douglas Wilson's "Prospects for the Study of the Book of Mormon as a Work of American Literature" (Dialogue, vol. 3, no. 1, 1968) offered these noteworthy comments:

No one will want to deny that the Book of Mormon has been a book of considerable impact and importance in America, insofar as it has affected the lives of many millions of citizens; yet it has never really been counted in the canon of American literature.

Not even the enlightened developments of the past forty years or so that have broadened the base of literary studies to include, in addition to belles-lettres, virtually all written and even oral expression have altered this strange state of affairs, though they may well prove to have set the stage for such a change.

No serious or sustained treatment of the Book of Mormon has appeared in any of our myriad literary histories, nor has any enterprising critic undertaken to explain an omission that, once it has been noticed and reflected upon, begins to look like a conspiracy.

Such studies as have appeared, in undergraduate or graduate theses or in exclusively Mormon periodicals and books, have, perhaps inevitably, gained no wide currency, nor have they achieved any real standing in the scholarly world at large.

Occasionally the Book of Mormon has been mentioned by a literary critic of consequence, as in the rare, almost isolated, case of Van Wyck Brooks, who once made it the subject of an essay. But the most striking thing about Brooks's essay on the Book of Mormon is that it soon becomes clear, alas, that he has not even bothered to read it.

Indeed, the author of the most penetrating commentary we have had on the work as an "American document," Thomas F. O'Dea, has pointedly observed that "the Book of Mormon has not been universally considered by its critics as one of those books that must be read in order to have an opinion on it."

Wilson attributes the "literary neglect of the Book of Mormon" largely to "both ignorance and diffidence."

Fortunately, we have many new tools since Wilson's day and even since Reynolds’ experiment that ought to stimulate further interest in the Book of Mormon as fascinating literature worth taking seriously. These tools begin with the work of Royal Skousen in establishing a critical text of the Book of Mormon, giving us the best approximation of the originally intended text dictated by Joseph Smith.

One example is the recognition that the mysterious Amalekites that are mentioned without explanation in the text probably were dictated as the Amlicites, only becoming the Amalekites through an easily explained scribal error from the longhand penmanship of Oliver Cowdery.

The Amlicites are carefully introduced early in Alma with clear foreshadowing, only to disappear shortly thereafter. Using evidence on the original manuscript to recognize that the Amalekites were probably the Amlicites adds significantly to the unity of the text and solves one of the little mysteries in the record, as I discuss on a post at Mormanity.

Some critics mock the Book of Mormon as "wooden" and just a bunch of cheap theology without touching upon the human condition and the realities of life, devoid of tales that have literary value. I think this reflects more about the opaque lens they use in evaluating the book than it does the complex details of the actual text.

When we look at the Book of Mormon without the blinders or opaque sunglasses that some seem to favor, we find a rich mix of many important elements of literature. This ranges from Nephi's psalm and other Hebraic poetical forms such as chiasmus, sometimes intricate and powerful, to extensive and deliberate allusions to great events of the past including the Exodus and other Old Testament events, as well as careful internal consistency in references to events and statements in previous portions of the text (e.g., the beautiful way the sacrament prayers at the end of the text make use of Christ's words in 3 Nephi).

We can marvel at the epic stories that are told, such as the migrations of groups from the Old World to the New, the rise and fall of empires, detailed and realistic tales of victory and defeat in complex wars, and the spiritual revolution and apostasy of the Nephites.

In addition to these big themes, we have intricate, complex tales of adventure, danger, and deliverance filling the Book of Mosiah, for example, whose very name is a Hebrew wordplay on a word meaning deliverance. Much can also be said of the symbols (e.g., in visions reported in First Nephi or used elsewhere in the text) and their importance in the text.

As for the things of the individual soul, we have deeply personal struggles such as Nephi struggling to deal with the anger he feels from years of abuse and derision at the hands of his brothers, and the tender, sensitive struggles of Jacob who has faced abuse and has risen from it with great gentleness and sensitivity toward the feelings of others.

We see the yearning of parents for their children expressed simply and subtly through the faithful teachings rehearsed by the 2,000 stripling warriors who did not doubt their mothers.

We also see the depths of darkness in the human soul as power-hungry elitists conspire and acquire seats of power at any cost, ultimately resulting in the destruction of entire kingdoms. The peril posed by some megalomaniacs and their allies may be surprising to "normal people" but is reinforced by tragic lessons of history since the Book of Mormon came out.

Some of the literary value of the Book of Mormon remains hidden, though until it is brought out through study and faith. This is true of chiasmus, which was only recently recognized as one of several different classic Hebraic poetical structures found cleverly woven into the text of the Book of Mormon.

This is also true of the abundant Hebraic word plays in the text, some of which were only first published and discussed in the last few weeks (e.g., see the Mormon Interpreters's 2015 articles on the word plays involving Heshlon, the "directors" mentioned in the Book of Mormon, and also the female name Abish).

An example worthy of detailed study is the literary value of King Benjamin's speech, which included many once hidden elements. One of the most interesting aspects to me is the way in which King Benjamin leads his people in a covenant making ceremony that reflects the major steps of ancient Middle Eastern covenant patterns that were not recognized until roughly a century after the Book of Mormon came out.

The Book of Mormon not only uses many classic literary tools and concepts, but, like much of what we call great literature, has much to teach us about the human condition and the human soul, with value that transcends its ancient origins and still speaks to us today.

But more importantly, the Book of Mormon tells us not just how to understand some aspects of the human soul, but how to transform the human soul into the soul of a son or daughter of God, a saint, committed to Christ, on an epic journey of our own that will bring us close to Christ.

That's real value and truly great sacred literature, making the highly ignored Book of Mormon a great and marvelous work indeed. Please, give it a chance.