I am officially freezing.

Of course this is an exaggeration, but it isn’t much of one.  Even our Christmas tree, which is still sitting in our family room this first week of March, looks cold and forlorn.

It is so cold and snowy here on the East Coast that church was canceled here in our own little corner of Mormondom last week.  This is something I did not mind.  Snow days, whether they are in the form of vacations from elementary school or days off from work or even a rare day of hooky from church, are days to be cherished.

But when it gets so cold that even our goosebumps get goosebumps, I can't help but think of my first car.  It was a beautiful car, back in the days when automobiles were built to be powerful as a locomotive, and gasoline was so cheap that sometimes people would just drive around if they had nothing else to do.

My car had a V-8 engine, which meant it was designed to go 120 miles per hour so smoothly that you could rest a glass of water on the dashboard of the vehicle while you were driving and see hardly a ripple on the surface of the water.

In fact, cars those days were designed so well that you could easily look down and see that you were going 120 miles per hour, thinking that you were only going 55.  Oops.  It was easy to have a lead foot, back in those days.

Today, if you go more than 65 miles per hour, your car starts to shimmy and shake.  Bolts and screws and pieces of plastic start flying across the open areas of the vehicle as dangerous projectiles, and if you chew gum with your mouth open you are liable to break a tooth.

Millennials may have a hard time believing this, but back in those days cars did not have seatbelts.  Nobody had ever heard of air bags, so we did not have those either.  If you got in a car accident, you died.  It was sort of the equivalent of Smart Cars or Mini Cars today.  You just knew you were going to die, so you tried hard to avoid an accident.

Here is a picture of a 1963 Oldsmobile 98.  I assure you, it was a lot bigger than it looks in the picture.  It got eight miles to the gallon.  This is not a typo.  I'm sure when I was driving 120 miles per hour, it got even fewer miles than that. 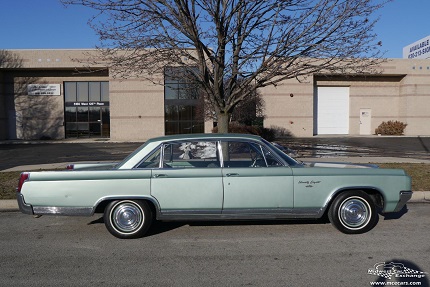 Fortunately, gas only cost 25 cents per gallon at the time.

For the most part, I was only using the car to drive to and from school, which was only a mile or so away from home.  Being inside the car protected me against the bitter winter winds as I commuted between home and school.  I did not, however, use the car to keep me warm.  I decided I could not afford to run the heater, so I did not touch the heater.

Even when I went to and from Salt Lake City — a hundred-mile round trip from Provo, Utah — I was careful not to touch the heater of that car. Instead, I bundled myself up in a parka, scarf, gloves, and other assorted warm clothing to keep the cold out. Oh, thinking about that warm heater was a real temptation, but I was on a tight budget and could barely afford to keep the car gassed as it was.

It was a particularly bitter winter that year.  I am sure there have been worse winters since then, but that year people talked about the record-setting cold.  For a week or two the temperature was 18 degrees below zero.  I did not turn on the heater in that car, but I was glad to have the windows protect me from the bitter wind.  I just could not afford to pay for the extra gasoline that running the heater would cost me.

The following summer a friend borrowed the car to take a girl on a date.  He drove it straight up "Y" Mountain in Provo to impress her and got the car stuck.  The men in our ward had to trek up the mountain and pick up that boat of a car by hand to turn it around so Dale could drive it down the mountain again.  Have I mentioned that the car was all steel?  The car never drove right after that, so when he asked to buy it from me, I sold it to him for $150 — exactly what I paid for it.

Years later when I met Fluffy, I told him this story and he laughed and laughed. He explained that car heaters work using the heat that is given off as a natural byproduct of the engine running. Running the heater will not burn an extra drop of gasoline, and in fact the engine might run more efficiently when the heater is running too.

So I could have been running the car heater in that car and its successor as much as I wanted without squandering an ounce of gasoline.  Air conditioners may eat up gasoline, but heaters do not.  All the freezing days and nights I spent in my powder blue Oldsmobile could have been spent in happy comfort, but I assumed that the heater used gasoline and worked from that assumption without ever checking to see if my assumption was correct.

I think about this story on occasion, and wonder how much of our lives we waste based on false assumptions. How many times do we chase after things, only to find when we reach them that they are not what we thought we were pursuing?

We all know individuals who have been so focused on a particular goal that they have set aside other things (sometimes much more important) in the pursuit of that goal. Often times it is only by achieving that goal that they realize they are not happy, and that true happiness could have been obtained via some of those things that were cast aside as unimportant during their journey.

We all have our temptations. They come into our lives like railroad trains or like butterflies, and they may blind us for the moment or for long years as we follow false assumptions instead of things that are better.

Fortunately, life is full of second chances. When I make a mistake and find myself going in the wrong direction because I thought the ring on the merry-go-round was gold and it turned out to be brass, God allows course corrections. With a little hard work we can often do a course correction to get us back on the path to obtaining those treasures in life that are of true value.