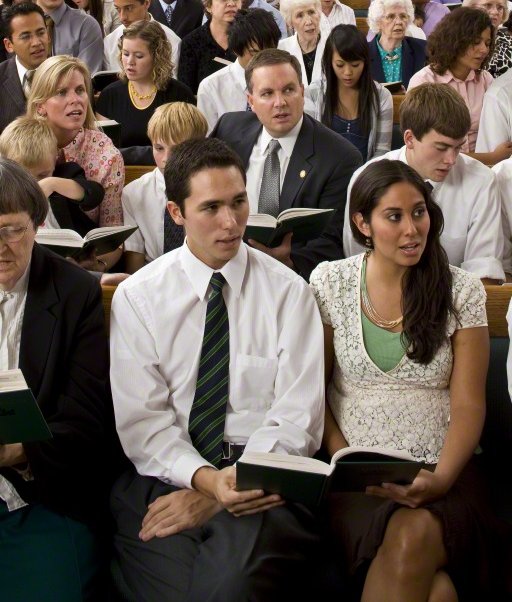 My husband has a stake calling, and I take my children to church alone almost every week. We are a large family and my children are very young, so I try to get to sacrament meeting early enough to sit down and get settled.

The problem is that even when I arrive before the meeting starts, there are often no seats left in the chapel. Even if a pew looks empty, it is being saved by a husband (who arrived early) for his wife and children (who are late). Or sometimes one person is taking up an entire row. That leaves me — and often other people, too — without a place to sit.

I have asked about opening the overflow, but the bishopric apparently feels that too many people would sit in the back instead of the front, and that it would be too noisy. So unless a friend saves me a seat, I’m stuck in the foyer trying to corral my children (while other people let their kids run around) until after the sacrament when the deacons vacate their pews.

So what do you think? Is it acceptable for one spouse to arrive early and save a whole row for the rest of the family, who arrives late? Isn’t that rude to people who arrive on time and are stuck in the foyer?

This is one of the more ridiculous situations I’ve heard of. You arrive on time to church but cannot find a seat in the chapel. So you sit in the foyer until the deacons vacate their pews and a spot opens up. All because people are saving seats.

The whole point of sacrament meeting is for people to take the sacrament in an atmosphere of reverence. Handbook 2, section 18.2.2. The time before the meeting should be used for prayerful meditation. Section 18.2.2.

Whether or you not you personally can meditate while supervising your seven children is beside the point: the chapel seating should be arranged in such a way that people can enter, sit down, and prepare for the meeting.

Overflow seating is instrumental to this goal, especially in a church where attendance tends to increase month by month as new children, new members, new move-ins and newly active members join the existing worshippers. The overflow provides adequate seating when the actual, pewed and carpeted chapel is full.

If your ward believes that front pews should be filled before back pews, and that density is desirable, only a few rows of chairs could be set up in the overflow. If noise is a concern, it should be recognized that it is noisier to have people waiting in the foyer and then shuffling into the chapel after the sacrament. Noise caused by another ward that also meets in the building cannot be considered.

Seating the members of your ward for sacrament meeting is more important than shielding people in the chapel from the sounds of other people in the building. Also, making it easier to find a seat would probably improve attendance.

I have four suggestions for you.

One: The obvious thing to do is to open the overflow yourself and set up chairs for your family. I know of no special authorization or training required to operate the overflow curtain. You simply undo the latch and push the curtain aside.

I strongly suspect that if you, with eight little ones in tow, start setting up chairs and tugging open the curtain between the chapel and overflow, someone will spring forward to help you. It will work best if you arrive before the meeting starts, and if you look concerned and earnest instead of huffy and offended.

Two: The next thing you can do is tell someone on the ward council what is happening in the foyer. If the bishopric is seated on the stand five minutes before the meeting starts (see Handbook 2, section18.2.2), they will not be able to see that people arriving on time cannot find seats and are stuck in the foyer. They will see the empty seats being saved by the punctual spouses and may not realize that the empty seats are not actually available.

Further, when people flow in after the sacrament, they will probably assume that those people arrived late. They have no way of knowing how many of those people arrived on time but could not find a seat. I suggest you approach the Relief Society president or high priest group leader.

“Sam,” you might say pleasantly, “could we have the overflow opened and set up before sacrament meeting starts? I’ve been on time the last three weeks, but I had to sit in the foyer until after the sacrament because all of the seats in the chapel were taken or saved. The Silvas and Sister Andersen were out there, too, so I know I’m not the only one having this problem.”

You can follow up with them, again pleasantly: “Sam, I was five minutes early again today, and there were no seats. Will the overflow be open next week?”

Why not lobby for a ban on seat-saving while you’re at it? Because it’s probably unnecessary. Seat-saving will cease to be a problem (although it will still be lame) once there are enough seats for everyone. Also, how would it work? Would the bishop approach Brother Snow and tell him he can’t sit down in a pew until his wife and children arrive?

A no-saving-seats policy works well at stake conference, where there really are good seats up front that should go to the punctual. But it seems unnecessary at sacrament meeting, where seating is ample and no seat is that much worse than any other.

Three: You could sit with the person who appears to be monopolizing an entire pew. It is not rude to sit with someone who is sitting alone. It might be awkward to crawl over an elderly widower with your nine children, so approach him pleasantly, smile and say, “Good morning, Brother Benson. Could we sit with you?”

He might say no, but I doubt it. He will probably say, “Certainly,” and stand up to allow you to enter the pew. During the meeting, you should seat your most charming and well-behaved child next to him, and allow him ample elbow room.

Four: If the overflow is typically opened after the sacrament is finished, you could seat yourselves there before the curtain opens. You would probably have to stay in the foyer to receive the sacrament, but after the water you could briskly and silently escort your children into the overflow and sit down. Then, when the partition was opened, the people on the stand would see that you had been sitting there all along.

Now for the seat-savers. In general, it is rude to save a large number of seats for people who have not arrived on time for a meeting, especially where seating is limited. If one spouse is early because he or she was attending an early meeting, you cannot expect that person not to sit down in the chapel until the rest of his or her family arrives.

But if one spouse is driving to church for the express purpose of saving a pew for his entire tardy family, that’s ridiculous (unless he takes at least half the children with him). It is selfish and unfair to people who arrive on time.

More importantly, saving seats is not friendly. When a new member or a visitor walks into a chapel, he is immediately faced with the where-to-sit dilemma: Are there assigned seats? Will he be sitting in someone’s accustomed spot?

What should he do when he approaches a deserted-looking pew only to find sets of scriptures placed every three feet? What if he reaches the front of the chapel and hasn’t found a seat yet? It’s awkward and uncomfortable and unwelcoming.

With that in mind, I hope that you will always remember the unpleasant feeling of not being able to find a seat at church. And that every time you see someone new or alone in sacrament meeting, Sunday School or Relief Society, you scoot over and say, “This seat is free.”