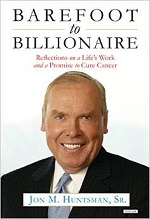 Tomes spouting advice on business and making big money are a dime a dozen, and most of us are inspired by rags-to-riches wealth, especially when it comes from hard work. There’s all that plus plenty of personal glimpses in Jon M. Huntsman, Sr.’s Barefoot to Billionaire: Reflections on a Life’s Work and Promise to Cure Cancer (Overlook Duckworth 2014, 450 pages in hardcover, $35.00).

There’s much to glean in this engaging read of a man whose name is recognized in far-flung places the world over. His humble beginnings, abusive father, loss of a daughter under tragic circumstances, and personal health crises, along with the near-bankruptcy of Huntsman Chemical, reveal that, heck, it hasn’t been an easy life for Jon Hunstman. But is has been a principled one.

What a person does with his wealth is telling. “We can’t take it with us,” he says, “but we can direct it toward helping others in significant ways.” The relief of suffering is embedded in Huntsman’s corporate mission statement, and Huntsman Sr. has seen his entrepreneurial success bless many in a variety of ways.

In simplified form, his philosophy is “make more in order to give more.” There’s an extensive explanation of his commitment to cancer research and finding a cure to the disease that took his mother and brother.

“The company was a means to an end,” he writes. “It provides the wherewithal to do something substantial for mankind in direct proportion to the material blessings we have received.” He encourages people of all means to get in the habit of giving without being motivated by a tax deduction.

Huntsman, who maintains that fairness and honesty create trust, no matter the arena, shares experiences and insights into the roller coaster ride that made him a millionaire at age 30 and leader of a huge chemical empire barely 20 years later.

“After teetering on bankruptcy’s edge in 1985, I had been named one of Forbes magazine’s wealthiest people in America by 1988,” he writes. “It came about through old-line business savvy, a dash of ingenuity, guts and a great team effort.” A Hunstman motto: “No risk, no reward.”

Another, “‘No’ is just the beginning of the conversation,” characterizes many of his eventually successful ventures. He openly and in great detail shares his corporate strategy as well as the family’s angst when the petrochemicals industry hit a downturn that almost forced the corporation into bankruptcy again in the early 21st century.

He often mentions wife Karen and their nine children as sources of strength and support for each other as well as for the family business and humanitarian efforts. “Above all, I am rooted in family,” he writes, and his affection for them is palpable.

Teamwork is one of the themes that evolves through the book, as “no one achieves success in a vacuum.” Huntsman is quick to credit those who helped create success of the family business and the Huntsman Cancer Center that is the most visible product of their charitable giving.

He tips his hat to people of integrity and has no qualms about naming individuals and companies he feels did not keep their word. (Another motto: “Get mad, don’t get even.”) The negative experiences are related without rancor, but more as unemotional recollections.

A practicing Latter-day Saint only recently released as an area authority, he treats reports of encounters with LDS Church leaders with the same kind of honesty, and it’s not always flattering. (For those who are wondering, he describes a warm friendship with President Thomas S. Monson, a fellow fly-fisherman.)

Along with freely shared observations of the Salt Lake city Olympics bid brouhaha, Utah politics, and Jon Jr.’s bid for the U.S. presidency, Hunstman offers lessons he’s learned: “There is more than money to a life well led. If wealth is accumulated in the process, fine, but gain it as a straight shooter. Make your handshake your bond. Trustworthiness is a key ingredient in relationships. No exceptions.”

Barefoot to Billionaire is far more than a rags-to-riches story. It reveals the real life of a man who has lived it with integrity, faith, commitment, and devotion to family, and has blessed many along the way.