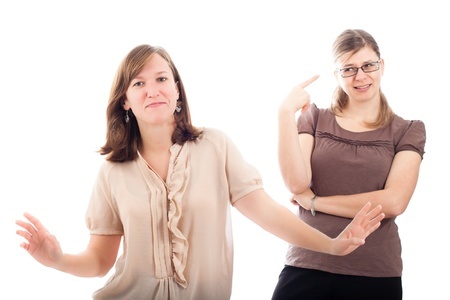 My husbandĺs family often shares stories from his childhood at family gatherings. His mother and siblings share these stories as if they were delightful and amusing childhood memories.

Recently, I learned more about the events behind these stories, and the new information has made it clearáthat my husband was a victim of parental behavior that was harsh and unkind, even by the standards of the day.

Is there any way to stop his family from sharing these unhappy stories at family gatherings?

So I understand why, upon discovering that your in-laws treated your husband badly, you are incredulous that they think these stories are delightful, and you would like them to stop telling them.

Sadly, of course, you cannot prevent anyone from sharing a story he wants to tell. But there are three approaches you might consider.

First, you could simply ask family members not to share the stories. ôFlorinda, that story about Ted in the play really bothers me. Would you do me a favor and not share it anymore?ö This request is simple, direct and uses your own feelings as the reason. And most reasonable people will respond, ôOh. Okay,ö even if they are bewildered by your request.

Two, you could interject another perspective when these stories come up. Your tone should be curious, conversational, incredulous, or perhaps a little impassioned, but not aggressive.

For example, imagine your sister-in-law has launched into the story of the time your husband was trapped all night in a tree by an bloodthirsty rooster.

ôLucinda,ö you might interject, ôIĺve always wondered Ś why didnĺt anyone help him? He was six years old and he was terrified. Being trapped in a tree isnĺt funny, itĺs awful.ö Or, ôBut Anastasia, do you mean to say that you knew the rooster was out?ö Or, if you have a very good relationship with your mother in law, ôTrudy, thatĺs awful! Why do you tell that story?ö

For another example, if a story recounts humiliations suffered by your husband, you might say, ôThat is not funny. I would have been devastated.ö Or, ôDid you really say that, Dru? That doesnĺt seem like you.ö

Remember, if you take this approach, that you donĺt really know the whole story, that no one has wronged you personally, and that people change. So even though you disapprove, you should keep anger and accusation out of your voice.

Three, the graceful exit. That is, when the stories start, you head to the den because you ôhave some work to do.ö

The biggest factor in which approach you choose and what you choose to say will be your relationship with your in-laws. People are more willing to hear unpleasant things from a person they love, and who loves them.

If you have a combative relationship with your in-laws, your options are probably limited to the graceful exit because they wonĺt want to hear it from you.

If you essentially accuse them of being cruel and callous, they will not evaluate your opinion on its merits. Instead, they will think you are just being your cranky, judgmental self again. And your accusation will become number 384 on their long list of the ways you look down on them and donĺt respect them.

You should also consider three additional things before approaching your in-laws.

One, is it necessary?

Even if your in-laws were harsh or unkind Ś and they wouldnĺt have been the first parents to face and overcome this weakness Ś these events happened decades ago. In fact, you seem surprised by the information you learned, which suggests that their behavior has changed in the years since.

If family relations are now warm and supportive, you should consider that perhaps the family knows the parents were out of line in the past, but chooses to forgive and forget.

Indeed, if everyone in the family knows the parents were out of line, that assumption Ś that the parents were inexperienced and incompetent Ś might form an important part of these stories. The stories might even be interesting to the family because they show how far the family has come.

If the family Ś especially your husband Ś is willing to forget the bad things that happened and only remember the amusing things, it might not be worth it for you to bring it up.

Two, who is bothered by these stories?

If your husband dislikes these unhappy stories, then he should confront the issue personally. ôGuys,ö he might say in a voice that is conversational but sincere, ôThere is another side to this story.ö Or perhaps, ôI hate this story. I have nightmares about that solo.ö

But if the stories bother only you, your first consideration should be whether your husband will mind if you say anything to his family. If you had blurted out your disapproval the last time you heard the offensive stories, well, that would have been that. But because you are taking a thoughtful approach to this problem, your husbandĺs feelings and opinions should be foremost in your mind. If you believe your interference will humiliate or embarrass him, you should keep your mouth shut.

Further, if you are the only person bothered by these stories, you should consider whether relieving your personal discomfort is worth any contention you might cause.

Finally, how will the family react?

If your husbandĺs family is composed of reasonable people who would feel sorry if they knew these stories bothered you, thatĺs one thing.

However, there are people in the world who stoutly refuse to believe anything negative about themselves, their families or their behavior. And people who are merciless to anyone who reveals that his feelings have been injured. And people who would make you or your husband the brunt of a new family joke for bringing up the past injustice.

If you believe, based on your past interactions with this family, that your request would be met with scorn, donĺt bother asking them to stop. Donĺt use your emotional energy to ask them to do something you know they wonĺt do.