What a terribly narcissistic title. I can explain. Just keep reading.

One of my favorite Christmas hymns is “I Heard the Bells on Christmas Day.” I love its message, that despite the strife and turmoil in the world, God is in control, and right will prevail.

I just learned that the hymn we sing is a modified version of the original poem, which was written by Henry Wadsworth Longfellow during the Civil War. Longfellow lost his wife in a horrible accident in 1861.

The Christmas after her death, he wrote, “How inexpressibly sad are the holidays.” The next year, he recorded in his journal, “A merry Christmas, say the children, but that is no more for me.” Then his son Charles, a lieutenant in the Union Army, was shot. In 1864, the civil war was raging, and Longfellow wrote his poem, “Christmas Bells.” (For a more detailed history, click here.

When John Baptiste Calkin wrote the music, he omitted the fourth and fifth verses, which go like this:

Then from each black accursed mouth
The cannon thundered in the South,
And with the sound
The carols drowned
Of peace on earth, good-will to men!

It was as if an earthquake rent
The hearth-stones of a continent,
And made forlorn
The households born
Of peace on earth, good-will to men!

A hundred and fifty years later, we don’t have much cannon fire in the South, at least not where I live. Yet the next verse of Longfellow’s poem still rings (pun intended) true.

Now usually, when we talk about peace on earth, we feel fairly helpless because we have so little control over international affairs. If Vladimir Putin has a bad hair day, it will probably have more effect on world events than everything I do in my entire life.

So we all agree that if we had a time machine, we should go back and kill Hitler. If we ever meet a genie, we should wish for world peace. Other than that, we feel that there isn’t much we can do.

This idea of a geopolitical route to peace is nothing new. During Christ’s time, the Jews assumed the Messiah would free them from Roman captivity. Instead, His work was more subtle, penetrating, and permanent. Rather than changing borders, He changed hearts.

In general, conflicts are ignited on an individual level as people become emotionally committed. Leaders capitalize on the fear and hatred felt by the masses. These feelings have three main causes.

The Messiah’s teachings were radically different from the Hebrew law and oral tradition at the time. He infuriated many leaders because he told them, in public, that they were wrong. However, when He dealt with individuals, even those with whom He disagreed, He showed them love, kindness, and understanding.

And so it should be in our own actions. We can disagree with policies and principles without being hateful.

Modern political discourse is full of generalizations. Many conservatives worry about illegal immigrants bringing diseases and stealing our jobs. Meanwhile, liberal feminists complain that men are pigs. The recent Ferguson protests focused on the divide between black and white.

It all boils down to ‘us vs not-us.’ When we look at trends and stereotypes, as opposed to individuals, conflict occurs more readily.

It is much easier to hate a group of people than an average person in that group. In some communities, say a society of serial killers, or an Adolf Hitler fan club, everyone is bad. Usually though, hated groups have a few members causing most of the problems, while everyone else is just a regular person, not much different from you or me.

Although we cannot perceive thoughts, as Jesus did, we can spend time with people, serve them and ask respectful questions. As we get to know individuals who initially seem so different from us, we find attributes we have in common with them. Strangers become friends.

So, on one side, we have large and catastrophic events that lead to rifts and conflict. Very few of us have much influence on that scale. On the other side, there is the individual healing that comes from following the example set by the Prince of Peace, whose love has been healing hearts for millennia.

I may never meet a genie, or build a time machine, but I can show love to my fellow man. In that way, peace on earth begins with me. It is my responsibility. I can join my voice with that of Henry Wadsworth Longfellow, and so many other good people around the world in saying,

"God is not dead; nor doth he sleep!
The Wrong shall fail,
The Right prevail,
With peace on earth, good-will to men!" 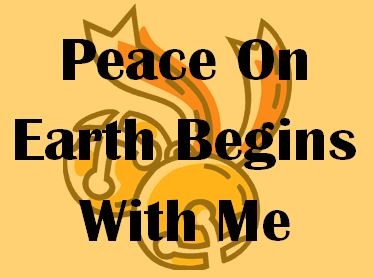