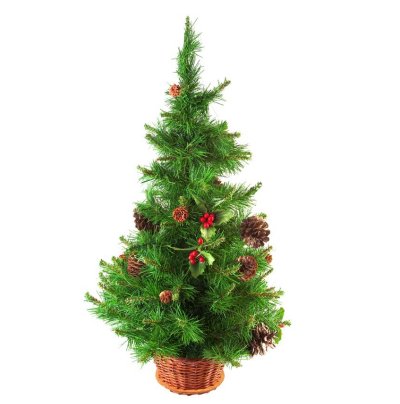 We never had a Pinterest-perfect Christmas while I was growing up.

When I was seven, we moved across the Atlantic in December. Our stuff, including all of our Christmas decorations, came over on a boat, and didnĺt arrive in time for the holiday. That year, we drew a tree on poster board and used my dadĺs socks as stockings. We didnĺt care that our Christmas didnĺt belong in a magazine. We were just happy to be together as a family, starting a new adventure.

When I was a teenager, we moved to Utah, and it became a tradition for my family Ś aunts, uncles and cousins Ś to go out into the mountains and cut down our own Christmas tree. We bundled up, grabbed our snow shoes and trekked around for a couple of hours, scouring for that elusive, perfect tree.

We never found it. After a couple of hours of plodding around, weĺd start to get tired. Someone would mention hot chocolate. Then weĺd say ôThat one looks ok,ö chop it down, and drag it back to the car.

Once it became the focal point of our living room, flaws became much more apparent. A small bare spot became a gaping hole. As Christmas approached, the tree got worse as the needles fell like paratroopers invading the carpet.

One year, there was a blizzard, so everyone but my dad and uncles stayed home. The men, who didnĺt want to get lost and die of exposure, chopped the four trees closest to the road. My dad was nice and chose to take home the worst one.

Picture Charlie Brownĺs famous tree, then make it five times taller and remove half the branches. We could have put both a star and an angel on that tree because the top split like a ĹY.ĺ The thing was massively crooked. It fell over every other day. Iĺm pretty sure we eventually resorted to duct tape and twine to keep that tree upright.

That was also when my sisters loved to re-arrange the ornaments on the tree. They liked to group all the ornaments of the same type on one branch. The gingerbread men had to be near their wives, and the nutcrackers were having a party. Visitors would say things like, ôYour tree looks soů interesting.ö

An empty-nester friend reflected, ôOh, I remember when the kids used to decorate our Christmas tree.ö Little did she know that my mom had spent the last thirty minutes fixing my sistersĺ decorating endeavors. I think she forgot to fix the reindeer whose legs had been put where their antlers belonged.

Oddly, a really lovely tradition came out of the Ugly Tree Years. After we ran out of jokes about the unfortunate evergreen, we would pull out a story and read it together. It was called Why Christmas Trees Are Not Perfect. 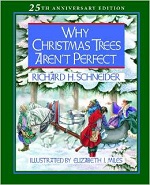 The book tells the story of a forest in a faraway country that was filled with evergreen trees. Each was tall and stately, its trunk perfectly straight and its branches full and green.

Every year, the queen would come out in her horse-drawn sleigh and select the most perfect tree. It would be taken to the great hall of her castle and bedecked with candles, garlands and all manner of finery for the royal Christmas celebration. All the trees made sure to keep themselves in immaculate condition, aspiring to this, the highest honor among evergreens.

There was one fine young fir that was sure to be chosen one day. It grew tall and straight, with flawlessly shaped branches, just like its neighbors. But there was something about it. Its needles were just a bit greener its branches just a bit fuller than the othersĺ.

One night, a great wind blew through the forest. Just like they always did in such weather, the trees held their branches tight up against their trunks. This formed an impenetrable barrier and the wind blew around the trees without warping any branches.

A wren was caught in the storm. Seeking shelter, it flew around forest, but as the tiny bird tried to land on a tree, it would pull its branches up even tighter, giving the wren no respite from the wind. Finally, exhausted, the bird could fight the wind no longer, and was blown, head-over-tail, straight into the promising young fir.

Quickly, without thought, it relaxed its branches, allowing the bird to enter. Then it curled its branches tightly around the bird, protecting it from the fierce storm. When the wind abated, the wren flew back to its nest unscathed. The tree, however, shook out its branches to find that it had a small gap where the bird had rested.

ôOh well,ö thought the tree, ôIĺm young. I can probably get this to straighten out with time.ö But the gap never fully disappeared.

Later, a young rabbit got lost in a blizzard. Freezing, it came to the young fir, which lowered its branches for the rabbit. It never could get them to come all the way back up again. ôOh, well,ö it thought, ôIĺm so beautiful that hopefully the queen wonĺt notice a few small flaws.ö

Years passed, and the tree lost needles, had branches bent, and became gnarled and ugly. But it never turned away a creature that needed shelter.

The day of the queenĺs visit arrived. All the trees preened themselves, their needles rustling with excitement. They stood up straight and lifted their branches high off the ground, each showing off its beautiful cone shape.

The old fir tried to hide its gaps and bent branches. It wanted nothing more than to run away from the queenĺs procession. Instead, much to its chagrin, the sleigh stopped right in front of the old fir.

She got down from her sleigh and was ready to condemn the tree, but she noticed something in its branches. It was a feather. Looking down, she saw tracks from several woodland creatures who had been sheltered by the old fir.

She was reminded of a night in Bethlehem, when young family had nowhere to go but a stable. The wise queen recognized the treeĺs sacrifice and chose it to decorate her great hall that year.

And so if you walk in an evergreen forest today, you will find, along with all sorts of woodland creatures, bent branches and gnarled trunks. And they all remember the old fir that was honored for its kindness, not its beauty.

Over the course of our lives, weĺll encounter all kinds of people. Some of the most beautiful are the ones who, like the old fir tree, give up things they value in order to serve those around them.