Three weeks ago I wrote how Roger Fenton became famous for his battlefield photography during the 1853-56 Crimean War. An even-more famous personality emerged from that blood-laced conflict: Florence Nightingale. 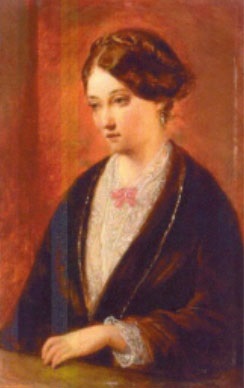 Nightingale (1820-1910) was born into a wealthy, upper-class, British family pausing in Florence, Italy, which explains her given name. She was just a year old when the family moved back to England. Among the family’s residences was Embley Park, one of those huge piles one sees so often in a variety of BBC television dramas.

Florence was primarily educated by her father.

She was living in Embley Park when, at 16, she believed she received a call from God that she should devote her life in service to others. The pattern for well-situated young women of her time was to become wife and mother. Consequently, her family was angrily opposed to her intentions. Even so, in 1844, she began educating herself to master the arts and science of nursing. Nursing schools did not exist.

Florence was attractive and personable. Among her suitors was Richard Milnes, 1st Baron Houghton, but after a nine-year pursuit, she gave him the gate. For Florence, marriage would be a stumbling block.

In Rome, in 1847, she met a British politician, Sidney Herbert, who was on his honeymoon. Florence and the Herberts became lifelong friends. When Herbert became Minister of War during the Crimean War, he and his wife were instrumental in enabling Florence to work there as a nurse to the wounded warriors. 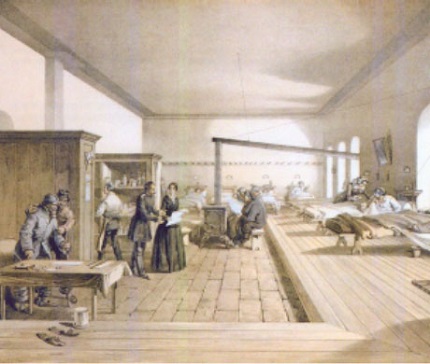 Hospital at Scutari, where Nightingale worked. An 1856 lithograph, Library of Congress.

Nightingale was already a relentless social reformer. She was appalled by conditions she found on the battlefields and in the hospitals of the Crimean War, and she became famed as “The Lady with the Lamp” because of her willingness to make her rounds in the night to treat wounded soldiers. 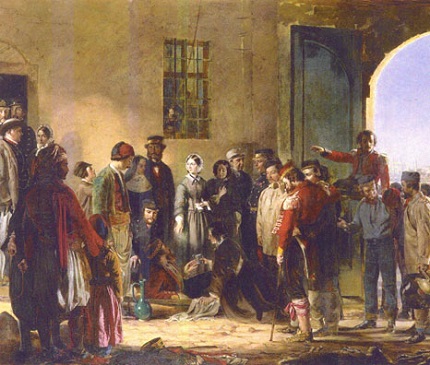 Although the greatest achievements of her life were yet to come, the Crimean War made her a legend. She was immortalized in all the art forms — by sculptors, painters, poets, novelists.

Among the American sculptors entranced by her legend was Avard Tennyson Fairbanks (1897-1987), who modeled her, Lady with the Lamp: Florence Nightingale, in plaster. The model was taken to Carrara, Italy to be carved in marble. This marble rendition was featured on the cover of the Journal of the American Medical Association, 12 August 1974.

After the orginal plaster model was returned to the United States, it was used to cast a single, 26" high signed bronze. Many of Avard’s children and grandchildren have gone into medicine, and their gifts of Avard’s art enrich many hospitals and universities.

One of Avard’s grandsons is in the process of giving this unique bronze Lady with the Lamp to a healing institution. 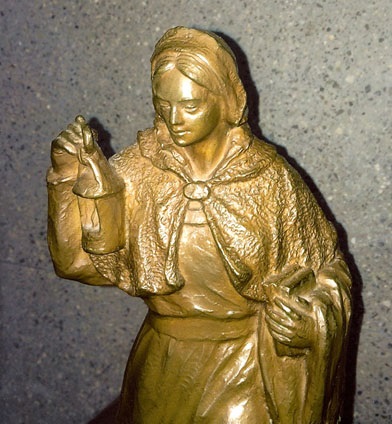 Avard Fairbanks, Lady with the Lamp, bronze (detail). The beautifully patinated bronze shows Florence Nightingale, the legendary founder of modern nursing, as she goes about the night to care for someone in need. She carries a lamp in her right hand to light her way, while clutching her writings and notes in her left. The statue by Dr. Fairbanks — who taught anatomy in the School of Medicine, University of Utah, while serving as the university’s first Dean of the School of Fine Arts — is the sculptor’s tribute to the ennobled caregiver from the Crimean War.

This British statue of Florence Nightingale, Lady with the Lamp, was installed outside the Derbyshire Royal Infirmary, which is now closed. Note the different kinds of lamps the two sculptors used, one a torch, the other a lantern.

Returned to England, Florence founded the first secular nursing school in the world, at St. Thomas’s Hospital, London. The pledge taken by new nurses is known as the Nightingale Pledge, and an international nurses’ day is held worldwide on her birthday.

There is much more to the Nightingale story. Suffice it to say that her worldwide legend was enough to attract the healing interest of one of Utah’s greatest monumental sculptors.

Her career might be summed up by this beautiful stained glass windows created by Russ Hamer. Initially installed in the Derby Royal Infirmary, it is now in St. Peter’s church. 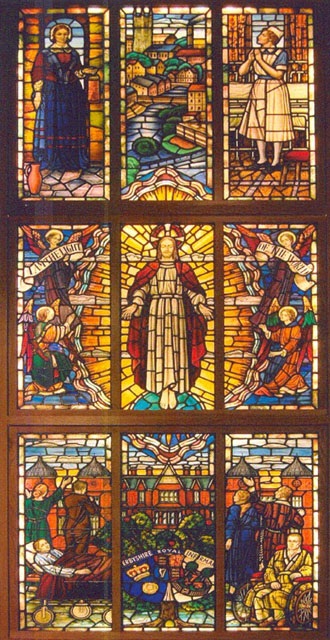