I am writing The Joy of Vision!, a full-scale biography of William Henry Clapp, the distinguished Impressionist painter who was director of the Oakland Museum for 34 years and one of the founders of the Society of Six.

Actually I began writing this forty years ago. Circumstances obliged me to lay it aside for much too long. The time has come to finish it.

But to finish, I need to unravel some snags. I need a few volunteers who like the challenges of discovery to speed to my rescue.

Maybe you can help. Or if parts of my plea infiltrate some of the social media, someone else out there will have viable answers.

Several answers can be quite simple, if one knows where to look.

A few of my concerns, I suspect, can be answered quickly by one of you crack LDS genealogists. (I had one of those helping me with a particular question, but she seems to have disappeared before finding the essential fact about Clapp’s girlfriend.)

The Joy of Vision! will be illustrated by several hundred of Clapp’s paintings, including works in the permanent collections of ten American and Canadian museums.

1. Where was this painted?

This delightful small painting has long puzzled me. Its soft colors and beauty are not well shown in this printed image. It is one of my favorites of Clapp’s early images.

Yet I can’t pin it down.

When was it painted? What is the setting?

An obvious answer, it was painted in a public park. But where? Clapp studied for four years in Montreal. In 1903, he went off to Paris for four more, part of which he spent in Spain. While back in Montreal, he also painted in New York City.

Clapp’s brush strokes don’t reveal the Impressionism and post-Impressionistic touches he brought back from his studies in France.

I don’t know of any Paris park that fits the bill, and I have long familiarity with most of the city’s parks. Nothing French that I know of fits.

I surmised that it might be a Spanish park. The Spanish government invited me to be an official guest for an opening of its great annual art fair, ARCO, in Madrid. I took photos of the painting with me and consulted with ARCO leaders. No, the painting was not set in Spain.

The style of the swimsuit/sunsuit may indicate the time period. Any ideas? 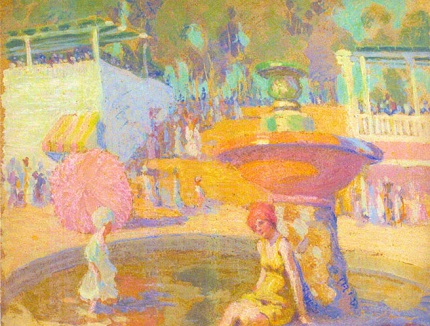 2. When was this painted?

This delightful oil sketch may date from the same period. The key here is the style of the swimsuits. A reader who has experience in clothing history may be able to date this painting with considerable accuracy. 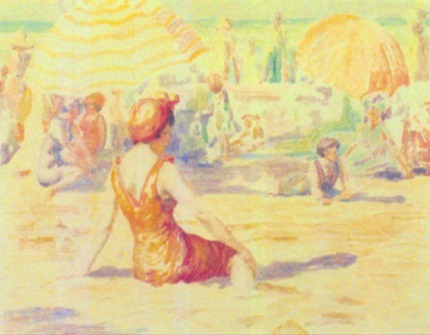 Before going on to the next questions, you need to know a little more about the artist.

Clapp’s life in a quick capsule: He was born in 1879, of American parents in Montreal. His early life is obscure. At some point the wandering family moved back to Oakland, and as nearly as I know, he was educated in Oakland.

Then, on a scholarship, he spent four years studying art in Montreal. He next went to France for nearly four years before returning to Montreal to exhibit there, in New York, and in Pittsburgh, making his way as an artist.

He followed his family, 1915, to Isle of Pines, Cuba, where they lived for two years until a hurricane wiped out his father’s pineapple plantation, and everyone moved back to Oakland, 1917. (Except for his four years in Paris, Clapp appears to have lived always with his parents, until they died.) He soon became head of the Oakland Museum.

The love of his life, Florence Wieben Lehre, was his vibrant assistant at the museum, until her untimely death in 1931. Subsequently he married Gertrude Schroder and became stepfather to three sons, Ralph, Donn, and Jack. It was a highly dysfunctional family.

Answers may require searching old school archives, yearbooks, newspapers, census compilations, and so on. I assume Clapp was living there from about 1885 to 1897. These dates may be off.

Florence, born in California in late 1898, was the youngest child, of five, and the only daughter of Christian and Margretta Wieben, both born in Schleswig, Germany. Her older brothers were Alexander, 1886; Herbert, 1890; Walter, 1892; and Elmer, 1895, all born in Arizona. In 1900, the family was living in Fruitvale Precinct 3, Alameda county.

In 1909, Florence, 11, was a cast member in a Christmas play performed at the Fruitvale Christmas Cantata. In July, 1913, she attended a juvenile party hosted by the Rosebud Guard team of Fruitvale Hive, No.16, Loyal Order of Macabees. In May, 1917, she graduated from Fremont High School in Oakland. By then the Wiebens were living on East 23rd Street in Oakland.

In the 1920 census, Florence is listed as a registered voter living at 2832 East 23rd. St., and her occupation is secretary.

It was probably the next year, since she was 23, that Florence married Frederick W. Lehre, who was her age. (Were they high school sweethearts?) In subsequent censuses and other directories, Frederick was listed as being in advertising and an artist.

On September 22, 1931, Florence Weiben Lehre, 20 years younger than Clapp, suddenly died. She was only 32. Clapp had intended (wanted?) to marry her.

She was not living with Frederick at the time.

When the Clapps moved back to Oakland they lived at 222 Sunnyside (Piedmont). Was this immediately, or only later? Did they own or rent? Who was the owner, Clapp’s father or the son?

After Mrs. Lehre died, her place as associate curator was taken by Mrs. Gertrude Schroder, perhaps as much by happenstance as by appointment. Gertrude was the divorced mother of three sons. Her ex-husband was an unlicensed architect and established builder who designed and erected a variety of well-known structures in East Bay.

In San Francisco, he designed and built the dome on the City Hall. The family fell apart during a building lull a couple of years before the Depression. Gertrude had a friend who was a ward heeler and found her a job with the library board. She was a crackerjack typist — but not a Florence Lehre.

Without Florence, the gallery needed help, and the library board transferred Gertrude to Clapp’s bailiwick. Three years later, 1936, in Woodland, Yolo County, near Sacramento, Mrs. Schroder became Mrs. William Henry Clapp. In Oakland there was a policy against the employment of a husband and wife by the city. By going a hundred miles away the couple hoped their marriage would not be noticed officially.

Gertrude had three teenage sons, so Clapp acquired an instant family, the posterity he had sacrificed. The oldest son, Ralph, was 19; the two younger sons, Donn and Jack, twins, were 17. At the start, Gertrude seemed to be a woman full of enthusiasm and encouragement, and she became part of Clapp’s life until his death 20 years later. But she was an alcoholic, even at work, and her help steadily diminished.

I assume that William Henry did not marry Gertrude Schroder and move her and her three sons into the Sunnyvale house until after his parents had died or moved. I don’t have the death dates of his parents.

Jack Schroder remembers a two-story, 10-room house, which enabled the three stepsons to have individual rooms. When I look at a current aerial view it appears to me that the big house has been replaced. When William Henry and the Schroders lived there, Clapp had a studio in the back half of the big garage and behind that a private open place where he could paint models out of doors.

Has Clapp’s house been torn down and the property subdivided?

I have searched in vain for family photos: Clapp and his parents; Clapp and the Schroders. One would think that there would be some remnants of these old family archives.

What I am most keenly interested in finding is a picture of Clapp’s only sibling, an older sister who died in her late teens. Supposedly Clapp used her face, rather than a model’s, when he was painting life subjects. What did she look like?

Several years ago I interview Donn Schroder (the older of the twins) in his Oakland home. He declared that he had absolutely no old photos, letters, other memorabilia, or documentation of any kind. Was he being forthright? I don’t know. Efforts to reach him since have failed.

This plays into the heart of the dysfunctional family. Donn was a musician and his mother’s favorite, in spades. He and his twin Jack grew up hating each other, still do, and it is no surprise that Jack does not have a single picture of his mother.

In his youth, Jack was sickly. Within days after he joined the U.S. Navy after Pearl Harbor and was no longer home, he got well. When I interviewed Jack in his Oakland home three years ago (he was 92) he was able to produce some pictures that William Henry had taken with a box camera in the days when he was studying art in Montreal. These will be in The Joy of Vision!. That was all that Jack had.

I assume that Ralph Schroder is dead. He was an educator and a college president. It is possible that one of his descendants might possess some of this old family stuff. But I don’t know who they are. A genealogical sleuth might be able to track them down, names and addresses.

7. What does this painting depict? 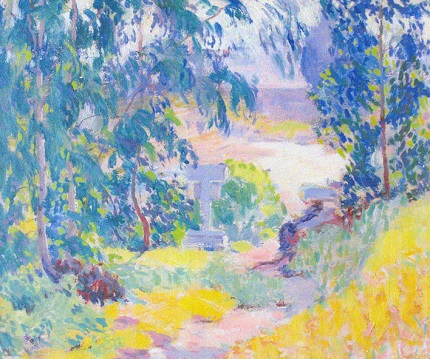 I call this painting Monument in the Trees. I have agonized many hours trying to decipher it. The T-shaped object in the center reminds me of some abandoned bridge supports over the Chattahoochee River in Georgia, which is clearly wrong.

I have speculated that this might be the remnant of a private cemetery in the Oakland environs.

As usual, my computer printout fails to communicate the complexity of this painting, a 15 x 18" oil on Masonite, painted probably about 1930.