Almost everyone in the LDS community has heard of Noelle Pikus Pace, silver medalist in skeleton at the 2014 Winter Olympics in Sochi. World media told her unusual story of being an athlete mom who agreed to compete again only if her husband and two young children could travel with her.

They were there, along with other family members, when she jumped into the stands to embrace them after her medal-worthy run. 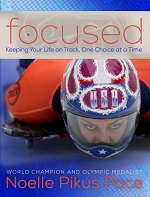 What may be less widely known is the back story of her long, hard, lonely journey to the medals podium, including recovery from an accident that could have ended her career after she won the Overall World Cup Title in skeleton in 2005, and her decision to retire in 2010.

Chapter titles such as “You Always Have a Choice” and “One Foot in Front of the Other” give some idea of the practical topics Pace addresses with the grace of a storyteller and the descriptive voice of a live-action sports commentator.

Pace’s personality comes through as she shares experiences, favorite aphorisms and poems, and quotes from the scriptures and Church leaders that have affected her life. It’s a readable, substantive book filled with insights and advice in an appealing layout.

Vital messages about self-acceptance and body image are of particular value to young women, but the life lessons she’s learned as an athlete have value far beyond any sport. 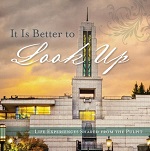 Another attractive book with many uplifting messages is It is Better to Look Up: Life Experiences Shared from the Pulpit (Deseret Book 2014, 182 pages in hard cover, $22.99). Excerpted from talks by more than 50 Church leaders past and present, well-known and less so, the book is illustrated with beautiful color photos.

Every member of the current First Presidency and Quorum of the Twelve has a personal experience here, told in one, two, or three short pages. Each is prefaced with a scripture. President Dallin H. Oaks’s gripping tale of being held at gunpoint while his wife watched from inside their locked car is an unforgettable reminder about listening to the Spirit.

Stories told by past leaders are featured as well, including those from leaders of the Relief Society, Primary, and Young Women. Anne G. Pingree recounts meeting sisters in Nigeria who had walked 18 miles to receive their temple recommends, despite the fact that the nearest temple was 3,000 miles away.

Former President Ezra Taft Benson tells how he learned a lesson the hard way when, as a young missionary in Great Britain in 1923, he and his companion decided to ignore counsel to discontinue street meetings, as they already had one planned and saw no harm in going ahead with it.

Although it does contain an index of topics, metaphors, and speakers’ names, the book lacks references for the stories or when or on what occasion teach talk was given. Nevertheless, it’s a readable and reliable source for preparing talks or lessons or just enjoying some personal uplift.