Fluffy and I went out of town last week. We didn’t go far. In fact, we only stayed about a half hour away from home, and we were only gone for two nights. But to see us packing, you would have thought we were going to end up in Timbuktu for the summer season.

In fact, as Fluffy packed the car, I heard him mutter a word that I am not accustomed to hearing from my Utah-bred boy. Yes, I heard words like that often in my natal city of New Orleans. New Orleans residents often spoke in words of four letters when I was growing up, and Fluffy's language as he packed the car made me nostalgic for home.

The bad word was not Fluffy's fault. The poor little thing was trying to cram more into a car than was designed to fit into a vehicle. A scooter, a wheelchair, a walker, a parade of medical devices and an assortment of luggage are not designed to fit in a Mercury Sable. Fluffy was trying to do the impossible, and his language slip could not be helped.

It was not the ideal way to start a vacation.

When Fluffy and I first got married, we often took spur-of-the-moment trips out of town. On those occasions, we didn't pack much. We usually took a change of underwear for each day we would be gone, along with a sack to contain the used underwear. I took my contact lens case and my contact lens solution. I also took a backup pair of glasses.

I usually took a nightgown, and we each took one extra shirt other than the one we were wearing, just in case we spilled something on the one we had on.

That was it. Packing took five minutes flat, and we could get everything in a duffel bag or even a paper sack. If we thought about it, we'd each throw a paperback book in the paper sack on the way out the door. We'd rely on the Gideon Bible in the motel room to provide our scriptures (or the Book of Mormon if we were staying in a Marriott property). We didn't need anything else.

When we went out of town last week, this is what we had to deal with:

Fluffy spent a good two to three hours assembling this stuff, and then another half-hour cramming it in the car, all in preparation for our half-hour drive to National Harbor.

By the time he got in the car, he was not in his usual cheery frame of mind. And then, less than forty minutes later, he had to unpack all that and put it in our timeshare unit. I could not do a thing to help him, being immobile as I am.

It’s times like this when Fluffy earns his designation as Perpetual Employee of the Month.

Fluffy, trying hard to maintain some semblance of patience as we waited for the air-conditioning system in our timeshare unit to be repaired so we could check in with all our medical paraphernalia.

I guess it’s probably overkill to admit that it took at least an hour after we finally arrived at our destination before he was his normal sunny self. 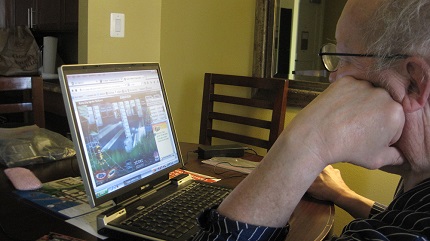 Fluffy unwound with a few games of spider solitaire after unpacking a ton and a half of old person’s paraphernalia.

When we were young, we used to get so annoyed with Fluffy’s parents, who used to sit in their condo and let moss grow on them. We could not understand why they did absolutely nothing with their lives when they were not tied down by a job, and when they had all the money they needed to go out and see the world.

Indeed, Fluffy and I have long remained partially packed for long trips. We have “trip kits” that contain all our regular toiletries, but “regular toiletries” are things such as toothpaste and toothbrushes and shampoo — things that are not included on the list I just named.

Now that we’re old, it looks as though we’re going to need an additional “elderly trip kit” containing all the things on that bulleted list.

It’s one thing to have an upstairs wheelchair, a main floor wheelchair, a wheelchair that stays in the car to be used for field trips, and a wheelchair that exists solely to transport me from the house to the car and back again when I’m wearing long dresses that are not safe for the walker. We have recently crossed that threshold and have become a four-wheelchair family.

But to have everything else in duplicate and all packed together to comprise our “elderly trip kit” would give us a bundle that would have to be lifted by a crane and carried in a flatbed truck. Somehow that takes the spontaneity out of travel.

We eventually were glad we did all that packing. We eventually used almost everything that Fluffy packed for us, with the exception of the Tums and the Prilosec and my pain medication — things we were happy we didn’t need but were nevertheless glad that Fluffy packed. If we hadn’t packed them, there would have been a desperate emergency. We know that from experience.

We know that as time passes, Fluffy and I are only going to get older. The packing list is only going to get longer. I have no idea what items will be added to it. I used to have to carry an oxygen concentrator with me — a huge machine that took most of the backseat of our car. I don’t have to use it anymore, thank goodness. But as we get older, who knows?

I think often of Ecclesiastes 12. I suspect it’s a chapter that is mostly unknown to young people these days. Do people who are under forty know that the quivering “keepers of the house” are shaking arms, the “strong men” are flailing legs, the “grinders” are missing teeth, and the darkened windows, of course, are eyes that no longer see?

These days, Fluffy and I are two of those decaying houses. Our friends are deteriorating neighborhoods. We are whole subdivisions that are falling apart, and all the Ben-Gay in the world is only going to prolong the inevitable.

But when we go to that “long home” that Ecclesiastes 12 mentions, it will not be the unhappy occasion that Solomon envisioned. There may be mourning here, but there will be no packing lists and no pulled muscles as someone tries to put more paraphernalia in an ancient Mercury Sable than it was ever designed to hold.

On the contrary, we will step across to our new home unencumbered from the pains and ailments of this old world. We will be free of the sorrows that pull on us here. We will be so light — enlightened — that we may well feel as though we are flying, because the things that held us back are holding us back no longer.

As much as I love this world, and as much as I do not want to leave it, I’m still excited to step over to the other side when my appointed time comes. I am not afraid of death. And the best part is, I won’t need to pack anything except for a life well lived.