This is the hundredth “Moments in Art” column I have written for the Nauvoo Times. Actually, 102 columns have run, but two of them were repeats. I am not sure how many more I will be able to write.

It has been fun, and I want to go on researching and writing them, but I have a couple of books that desperately need to be finished, and as I age my energy is limited. (I’ll be 88 on June 5.)

At least, my brain is half functioning, I think.

The number 100 makes me pause and reflect, and not totally about art. I have had a surprising number of brushes with history, always as a bystander, never as a participant, at least not an important participant.

When my brother who was in the U.S. Army Air Corps flew his one and only mission in August, 1945, I was in the Army Specialized Training Program studying civil engineering at Oregon State. His mission ended the war.

The city had put up a temporary barracks in front of City Hall so that visiting servicemen could have bunks for the night. At the time, the United Nations was being created, and an important group was meeting in the city to formulate the human rights doctrine that would be so important to the UN charter.

Delegates represented all the Allied nations — and maybe some of the neutrals. So soon after the war, I don’t think the Axis nations were represented.

Visitors were allowed to watch the proceedings.

While I watched, the delegates debated and passed a section declaring that every person had the right to change his nationality. That meant that a person could leave his native country and become a citizen of another.

Fast forward five years. I was living in the Geneva, Switzerland, headquarters for the French Mission because I was the editor of l’Etoile, the church’s monthly French magazine.

Geneva was one of the most influential centers of the Protestant reformation. This importance is memorialized by the Wall of the Reformers, built on a remnant of the city’s original bastian. In front of the wall are very large statues of Guillaume Farel, Jean Calvin, Théodore de Bčze, and John Knox, pioneer protectors of the Reformation. 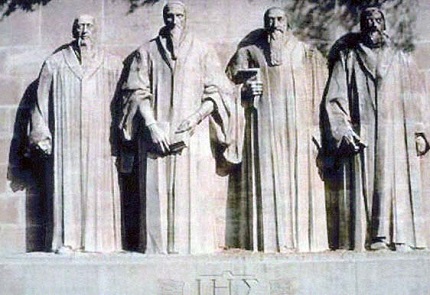 Two of the names should be familiar. Calvin, Calvinism, predestination: how great was his influence. Knox was a Scot, but he preached from the weathered cathedral that sits on the top of old-town Geneva. Most missionaries stationed in Geneva have stood in the church where these men preached. 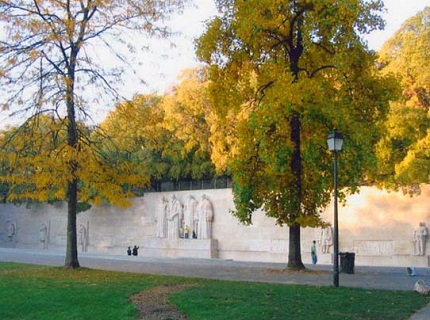 The size of the statues of the reformers is best appreciated when seen from afar.

I understand these reformers better because of James L. Barker’s two books, Protestors of Christendom and The Divine Church, as well as three years of Priesthood lesson manuals back in 1953, 54, and 55. The Divine Church is the best study of apostasy ever written by a Latter-day Saint scholar. Barker was my first mission president.

As Etoile editor I selected or wrote every word that went into the magazine, obtained translations (most were written by retired Sorbonne professor Charles Cestre in a tiny hand on paper that he fashioned from the inside of used envelopes of different sizes and colors), typed them out, marked them up, sent them off to the printer for typesetting, had the returned galleys proofread (frequently by a former mayor of Geneva), laid out the magazine, sent everything back to the printer, printed out the address labels for subscribers, and prayed for divine guidance. Actually that last came first.

My two mission presidents encouraged the missionaries to be aware of the world where we were working. Near the mission home was a small grocery store and newsstand. During the day I bought and read parts of two newspapers, one in English, the New York Herald Tribune, published in Paris; and one in French, the Journal de Genčve. (I was, after all, a professional journalist and newsprint was in my blood.)

The papers splashed that the noted American preacher Dr. Carl McIntire was holding forth in Geneva in a plenary session of the International Council of Christian Churches. McIntire was determined to build a world organization that would unite all Christian denominations. That was a sensational enterprise. It was something that seemed almost as significant as the United Nations.

Elder Jay Taggart, the mission bookkeeper who would have a distinguished career in Utah as an educator, and I decided we’d take a few minutes and listen to the proceedings. We knew that the ICCC would never attract great support from the Catholics or the Latter-day Saints. But this seemed like possibly a monumental endeavor, and we went for a peek.

McIntire did make headlines. But I learned later that there was a competing World Council of Churches organized in Amsterdam in 1948. McIntire’s group represented the most conservative denominations. The other organization, the liberals.

When riding on a subway car from the United State Senate office buildings to the Capitol, Frances and were introduced to the very junior senator from California, Richard Nixon. Nothing terribly enthralling there.

Fast forward again. My mother-in-law, who had been President of the Congressional Club (not to be confused with the country club in Maryland), held a 75th birthday party there for her husband, Senator Wallace Bennett. The place was filled with friends and important political figures.

This was at a time, 1974, when Watergate was going to claim its highest victim.

After the dinner had been served, the Congressional Club was abruptly swarmed with Secret Service agents.

President Richard Nixon suddenly appeared. He headed right for the piano, sat down, and played a rousing “Happy Birthday, dear Wallace,” while everyone sang.

I had no idea Nixon played the piano.

Then he met all the family and shook our hands.

Not world-shaking, nothing to do with art, but a memorable moment.

The last NASA Apollo rocket was scheduled for its use in 1975. Called Soyuz-Apollo, it was the first US-Soviet space flight. I was about to start on my third art museum tour with the French artist Nat Leeb, his wife Paule, and daughter Dominique. My daughters Alison and Anne completed our group. To begin, we were headed south.

Through James Fletcher, the head of NASA, I obtained coveted VIP tickets for the six of us to witness the launch. No other civilians would be closer, but even so we were about a mile away.

Tens of thousands of other onlookers jammed where they could on the base and surrounding Florida highways eager to see this last Apollo liftoff.

Film and television coverage cannot begin to convey the roar and ground-shaking power of these launches. Beyond comprehension. Being so close, we were thunderstruck.

The National Air and Space Museum on the Washington Mall, one of the family of Smithsonian museums, is the most visited museum in the United States. Large as it is, it can exhibit only a few of its holdings. Some of them require a lot of space. So a much larger Annex was built, the Steven F. Udvar-Hazy Center, near Dulles Airport. Finally, there was a place to display the entire Enola Gay, the plane that dropped the atom bomb on Hiroshima.

To inaugurate the display of the historic airplane, Air and Space gathered the last three survivors of the historic mission: General Paul Tibbets, the head of the 509th Squadron and the command pilot of the Enola Gay; “Dutch” Van Kirk, the incredible navigator of the flight; and Morris R. Jeppson, the weapons officer. Richard had helped develop the fusing mechanism for the bomb and had armed the bomb while the airplane was in flight. He was the last human to have his hands on it.

Richard introduced Frances and me to the two others. Then the three men mounted a platform. They recounted their experiences, both before and during the Hiroshima mission, and then answered questions. Tibbets and Van Kirk had been with the 509th since the war in North Africa. Richard joined the 509th when it began secret training for the atomic mission in Wendover, Nevada. 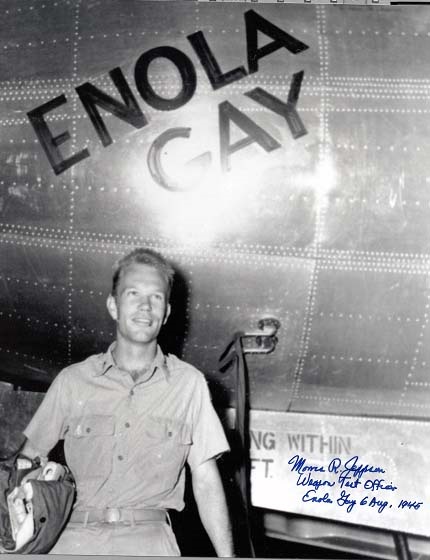 Morris R. Jeppson in front of the Enola Gay.

The Washington D.C. Temple (actually built in Kensington, Maryland) was the first modern temple of the Church of Jesus Christ of Latter-day Saints built east of the Mississippi River. The temple remains one of the largest ever built, and its district covered half the United States and Canada — and I suppose all the Caribbean.

It sits on a hill overlooking the Washington Beltway and is recognized as one of the important landmarks in the metropolitan area.

The pre-dedication visitor period was long, seven weeks. Visitors entered via the Temple Annex, where the recommend desk was located, crossed a covered lounge bridge over an internal roadway, and entered the main floor of the temple. Admission was by timed tickets.

A number of “universal” tickets were printed that allowed for visits at any time. Tickets were collected and counted at the Annex door, and when the universals appeared, they were kept separate and recycled.

Special tours were organized for the press and the diplomatic corps. I arranged for the general leaders of the Seventh-day Adventists, headquartered in Takoma Park, Maryland, and my best priest friend from Georgetown University to have universal tickets. Charter buses came from long distances. Among the most appreciative and polite visitors were the African Americans. 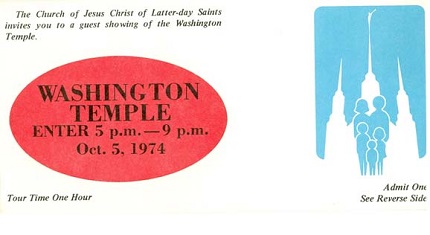 One of the coveted tickets for the Washington D.C. Temple dedication tours.

A dinner party was held for the volunteers. President Spencer W. Kimball was there and blessed and thanked us — a touching, memorable moment. In fact, the entire visitor period was touched with many memorable moments.

I had the privilege of being in charge of crowd control on Tuesday and Friday mornings, during the first dedicatory session, and then in the evening after the dedication. Many members who had come for the dedication had never seen most of the temple. Tours were arranged for any one holding a temple recommend and children eight or over.

I was in charge the last night of the pre-dedication, public tours. Frances was at the door and held the clicker counting the day’s visitors.

When the closing hour arrived and there was no one waiting to get in, I closed the iron gate across the Annex doors, and Frances clicked the last visitor.

The day’s attendance brought the total number of public visitors between August 30 and November 2 to 758,322, a record that stood for many, many years. 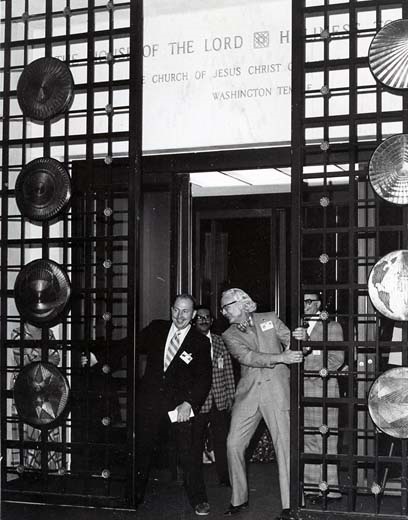 Closing the Annex gates, 2 November 1974. I was slimmer then.