How much would you pay for a 2400-year-old, cunningly crafted, Scythian tiara without diamonds but made with solid gold?

The tiara was fashioned as a skullcap in a shape similar to the Persian-style miter crown that became the headdress of the popes. It stood about seven inches high and weighed about a pound. 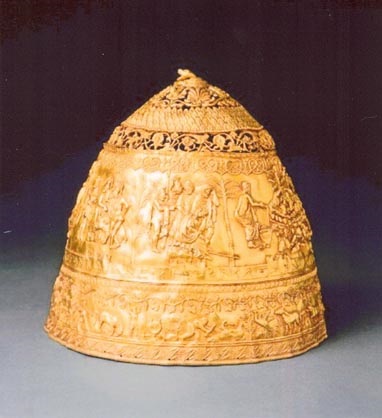 Visual interest centered on two narrative relief friezes around the circumference. The lower ring depicted scenes of Scythian life. The wider upper panel, done in much larger scale, depicted such episodes from the Iliad as the quarrel between Agamemnon and Achilles over the slave Briseis.

A circumferential band bore the inscription in Greek, “The Senate and People of Olbia to the Great Invincible Saitaphernes.”

Like Odessa, the small seaport colony of Olbia was established by the Greeks on the northern shore of the Black Sea. In the third century B.C., the people of Olbia erected a strong wall around the town to protect against the Scythian chief Saitaphernes, whom they had tried unsuccessfully to placate with gold.

The Scythian contact with Greek craftsmen resulted in fabulous Scythian gold artifacts, some of which exhibit the influences of Greek culture. In the face of various conquerors and migrations, the Scythians disappeared, as did much of their glorious gold. Ultimately, the Scythian lands became a treasure trove for Russian archeologists.

Some years ago I was associated with a young and very attractive Italian-born countess (the inherited designation might have been legitimate), the mysterious beauty you might see in the movies. She lived in Washington but had close ties with Italian art-dealer friends, who insisted on calling me “Professor.”

Shortening the story, which I might recount someday, she produced a stunning necklace that purported to be from these same Scythian digs. When another friend and I offered the necklace to Elizabeth Taylor (she wanted Richard Burton to buy it for her), Taylor turned the matter over to her jewelry specialist in Virginia for authentication.

In a room in our doubly secure art vault in Maryland, I watched him go through the meticulous chemical tests that proved the gold was indeed Scythian. Unfortunately Burton died before the deal was struck. When I can find my photos of the necklace and the other documentation, I’ll tell the whole story.

Getting back to the tiara, it was acquired by Rumanian Schapschelle Hochmann in 1895. He was a dealer in Ukrainian wheat. The next February, Hochmann hastened off to Vienna to sell his trophy.

Unsuccessful, he agreed to sell the tiara to Anton Vogel, a Viennese art dealer, and a runner named Szymanski for 30,000 gold francs, on condition they share with him the profits from a higher resale price. Vogel and Szymanski lost no time in hieing off to Paris. They managed to manipulate a meeting with the head of the Musées Nationaux and the Louvre and the Louvre’s chief of the Greco-Roman Department.

Other experts were summoned. The decision to purchase was unanimous. But the price had risen to 200,000 francs, and the dealers demanded immediate payment. There was no time to wait for the approval of the government and its money. The tiara was priceless, and there was a fear that the Russians would move to preempt the sale.

To make matters worse, Baron Edmond de Rothschild had warned that he would buy it for himself if the Louvre did not.

Two French art patrons, Edouard Corroyer and Théodore Reinach, loaned the money to the museum, and the sale was closed.

On April 1, 1896, the Tiara of Saitaphernes was officially given a place of honor in the Louvre. It is hard to recall another April Fool’s joke of such a cost!

Before the Chamber of Deputies could vote to reimburse the two patrons, clouds began to gather. A scholar from the University of St. Petersburg wrote an article published in Novoye Vrenia that the tiara was a modern fake. Alas, the French were not reading journals published in Russian.

Then a Munich archaeologist added his condemnation in writing: the color of the gold was modern, the tiara lacked the reddish-brown coating found on genuine pieces, the style was a mixture of periods and bore no valid relationship to the antique, the figures wore their garments in a modern manner, their figures and faces suggested modern melodrama, the vessels in the funeral pyre were anachronistic, the human forms were clumsy and ill-proportioned, and the Homeric references were certainly suspicious.

If the German was right, how could the French experts have been so duped? They had nothing to compare the tiara with. Most of the objects that had been discovered were in Russia.

In the beginning of 1897, Hochmann filed suit in Vienna against Vogel and Szymanski, claiming they had refused to share the profits of the Louvre sale. They replied, failing to see how that implicated them, that the tiara was fake. They settled out of court.

At the same time, Hochmann was being pursued by a Russian collector for selling fake antique-gold jewelry. The collector identified the maker: Israel Rouchomovsky, an Odessa goldsmith.

For seven years the Tiara of Saitaphernes continued to sparkle in the Louvre. The controversy bloated museum attendance. The French declared that no one since Benvenuto Cellini had been capable of doing such work.

When the Tenth Congress of Archaeology met in Riga, the director of the Odessa Museum asserted the tiara was a clever forgery. He said the Hochmann brothers had been knee deep in the manufacture of fakes.

The French replied that the detractors were merely jealous because they had been beaten by the Louvre. The keeper of the department of goldsmiths’ work at the Hermitage Museum in St. Peterburg came to Paris to denounce the tiara but after a careful examination became convinced of its authenticity. When the Chamber of Deputies voted to reimburse the patrons, some of the detractors beat a retreat.

P. T. Barnum wired the Louvre he would buy the tiara for 250,000 francs, giving the museum a profit, on condition the tiara turned out to be phony.

A man named Lifschitz, now living in Paris, was Rouchomovsky’s old friend in Odessa. In a letter published in Le Matin  he declared that he had watched while Rouchomovsky made the tiara. He insisted that the goldsmith had acted in good faith and had known nothing of the planned false attribution.

This assertion was seconded by a Russian woman who had spoken to the goldsmith a few weeks earlier. She said the poor man was very distressed at the misunderstanding that had placed his work in the Louvre.

THE ENGRAVER ISRAEL ROUCHOMOVSKY STATES CATEGORICALLY THAT HE PRODUCED THE TIAR RA IN 1896 TO THE ORDER OF A PERSON UNKNOWN [AND] IS READY TO COME TO PARIS TO PROVE HIS ASSERTION ON RECEIPT OF TRAVELING EXPENSES AMOUNTING TO 1,200 FRANCS.

Within three days public pressure became so clamorous that the Minister of Education informed the Senate that an official inquiry would be made. Professor Clermont-Ganneau of the Institute of France would be in charge.

The tiara was removed from public view and locked up.

France divided into two camps: pro-tiara and anti-tiara. Copies sold better than souvenir models of the Eiffel Tower. Men wore tiara cufflinks. A publisher in Nancy rushed into print a series of fanciful postcards. Newspapers broke into sly verse linking Saitophernes’s fez with everyone who was a public figure.

Because of the public mayhem, Rouchomovsky had to be smuggled into Paris.

Le Figaro noted: “During his stay in France Rouchomovsky will be the guest of the government... no other Russian except the Czar would get such treatment.”

The Louvre took every opportunity to prove that Rouchomovsky could not have been the author of the tiara.

Under interrogation, Rouchomovsky recounted how a man from Kerch’ came to him in search of a goldsmith. He wanted to give something extraordinary to a Russian archaeologist and thought a Greek tiara in gold would fit the ticket.

Rouchomovsky replied, “What would it look like? I have never seen a Greek tiara.”

The visitor gave the Rouchomovsky two books, (translating the titles) Antiquities of Southern Russia and Picture Atlas of World History. The goldsmith spent eight months creating the tiara, much of it from his imagination.

Investigation leader Clermont-Ganneau, unable to speak Russian, could not believe that such a crude person could be telling the truth. Rouchomovsky called for gold plates. Before the eyes of the unbelievers he fashioned portions of a new tiara. The man who only a few days before had been hailed a hero was now scorned as a common forger.

He was an elegant artist-crafsman, and the world had used him ill.

The tiara remains Louvre property, but it is displayed only during rare exhibits of fake art.