As the time came for me to start using a walker rather than a wheelchair at church, I looked on Amazon for a walker that would suit my needs. I had owned two walkers in the past, both of which were things of beauty, and both of which had met tragic ends on cruise ships. I wanted another walker just like them.

I found a great deal for a similar walker on Amazon, and it seemed to be just for me. I eyed it for a month or two, and one day the price plummeted. Normally a $123 item, it was suddenly being listed for the incredible price of $73. I could hardly believe my luck, so I immediately snapped it up. Immediately after I did so, the price went up again. Apparently there was just one for sale at that price, and I got it. 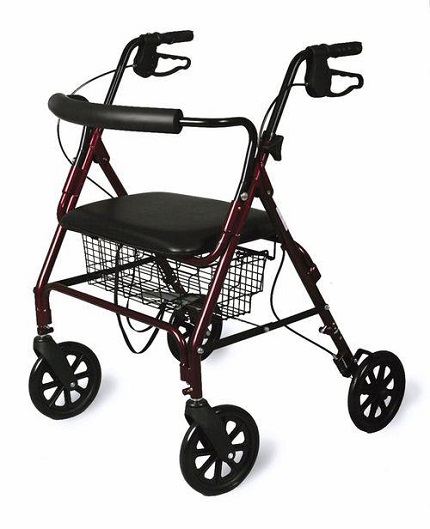 I loved the color. I loved the little wire basket that could carry my treasures. I loved the foam back I could lean against when I was sitting on the padded seat. This was a sweet unit. But I especially loved the color. Have I mentioned before that I am completely helpless when it comes to colors? This is true. If something is a pretty color, that seems to be the primary consideration as far as I’m concerned.

I am a shallow person.

So the walker arrived, and I took it for a test drive around the house. It was a total disaster. I had thought I was ready to stagger around the house with the benefit of a walker, but apparently I was premature. That walker slid around sideways like crazy. It took most of my energy just keeping the walker moving in a straight line in front of me. Obviously I had never used a walker on hardwood floors.

I took the walker to church on Sunday, and things were marginally better. The walker did not zip out from under me on that industrial carpet, and with great difficulty I was able to navigate the great lengths of the hallway. It was the hardest thing in the whole, wide world.

I felt like Columbus, Magellan, Joseph Smith, and the Apostle Paul, all rolled into one, but I still looked like Kathy so nobody treated me like a hero. Nobody except for Fluffy, and Marcia, my ex-visiting teacher. Marcia and Fluffy are the two world’s best cheerleaders. They both cheered me on even when I wanted to punch them in their cheery little faces.

Did I say using that walker was hard?

Then one day Fluffy pulled out the old-lady-style walker that was given to me in the hospital and replaced the front legs with a set of wheel attachments that had also been provided with it. I had no idea why he was doing it. That walker was bug-ugly. There wasn’t a prayer I was going to use that thing.

But just to humor him, I walked with it across the floor of our living-room-turned-bedroom. Holy cow! That thing had integrity. With the other walker, I had been using half my energy to walk and the other half of my energy to keep the walker upright. I didn’t even know that until suddenly I was able to devote all my energy to the task of walking.

I had been flirting with the beautiful prom queen walker and leaving the butt-ugly-battleship-gray Eleanor Roosevelt walker alone in the corner. 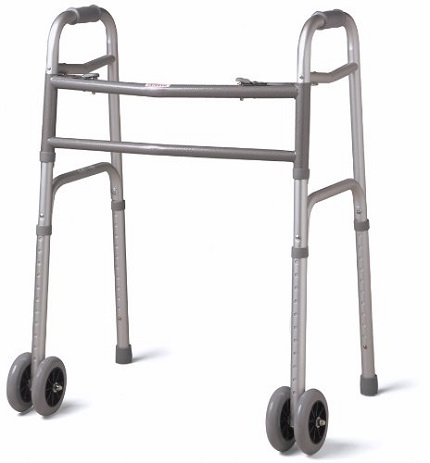 The Eleanor Roosevelt of walkers, full of integrity, but with no physical beauty to call her own.

Bravely I said to Fluffy that the following day I was going to put the wheelchair away and use the walker in our house all day long. I knew this would not be easy. It would involve all sorts of nasty transfers into real chairs, some of which had wheels on them without brakes to keep them from rolling. These things were going to scare me to death, but progress is progress. I was up for the task.

But alas, I am still Kathy. That walker was ugly. So I sat in the bathroom, washing my hair and wondering if we could get some spray paint at Lowe’s that would turn the walker purple or teal or Kelly green or some color that was not gray. What a dipwhistle I am!

I am such a dipwhistle that for one brief moment I even wondered if I should just go back to using that other walker — you know, the pretty one. The dangerous one. But I knew I couldn’t. As pretty as it was, that walker just didn’t have the structural integrity to keep me walking upright.

So I used Eleanor Roosevelt for a whole day, and then a day after that. I zoomed around the house on Eleanor Roosevelt like a kid on a tricycle. I looked forward to using her on Sunday. I envisioned flying through church like an almost-well human being, impressing everyone to pieces and signaling the beginning of a brand-new life.

We got to church on Sunday, and I practically leapt out of the car, ready to show the world the new Kathy. Alas, there was no new Kathy. By the time we got into the building, I was bent over like an old lady on an old lady’s walker, tired and miserable just as I had been the week before.

And then, with the drag of the church carpet instead of our hardwood floors, things were not as happy as they had been at home. I was worn out from the rigors of the parking lot, and the carpet grabbed me. Alas, I no longer had a seat on my walker that allowed me to sit down and rest. Once I was walking, all I could do was plod toward the chapel, which seemed to get farther and farther away.

Once again, by the time we got into the chapel, I felt like Columbus, Magellan, Joseph Smith, and the Apostle Paul, all rolled into one, but I still looked like Kathy so nobody treated me like a hero. Nobody except for Fluffy, that is. And Marcia, my ex-visiting teacher. Only they had even the slightest idea that I wanted to give up and go home crawl in bed and lie there in the fetal position and cry.

Eleanor Roosevelt may have been ugly, but she was a smashing success. I know that with her as my trusty companion, I will one day be able to walk the terrible distance from the car to our seat in the chapel without feeling like I have trudged to the far end of the world. It is sturdy Eleanor Roosevelt, not the beautiful red walker I so admired, that will carry me to the next step in my healing adventure.

I have learned a lot of lessons during the past year. Eleanor Roosevelt has taught me, once again, not to look for the flashy beauties that promise everything but do not deliver on their promises. Often it is the quiet ones that are overlooked in the corner that are the ones who can take you wherever you want to go.