This column will be the first public disclosure of the most important Arnold Friberg discovery in decades!

Cecil B. DeMille was a genius in conceiving and then creating powerful film epics. Although early in his career he had produced The Ten Commandments in black and white, his film-making abilities grew, and he wanted to remake it, much bigger, much better, and in Technicolor.

Because of the first of the Book of Mormon paintings, Cecil B. DeMille hired Friberg to come to Hollywood for a month to design costumes for his epic remake. DeMille was so taken by Friberg, both as an artist and a man of character, that he persuaded Arnold to stay in Hollywood through the production of the movie, which took another four years.

Friberg became more than a costume designer. DeMille would ask Arnold, “How do you see this scene?” and Arnold would create a large, detailed, and dramatic oil painting showing the characters in costume and the setting of the drama. He did this on at least 14 occasions. These paintings became the visual templates around which the celebrated motion picture was created.

For the pivotal role of Moses, DeMille hired the 6'3" Charlton Heston, whose career would include many heroic depictions of characters who were larger than life.

There is no question that Friberg’s portraits of these 25 actors ranked with the 14 crucial scenes in the visual depictions DeMille worked with while remaking his epic motion picture.

Arnold kept the 14 big paintings and the oil portraits of the cast in costume, and they have been on view at a Friberg retrospective in Salt Lake that ends this month, unless extended again.

The Ten Commandments is a film that exists on several levels and subtexts, but dramatically it is dominated by the story of Moses, particularly from his life as a slave in Egypt to his final encounter with God on Mt. Nebo.

Crucially, Friberg had to imagine and then paint portraits of Charlton Heston as Moses aged, not just as an unrolling of years but as results of the experiences that made his life. His skin, his face, his hair, his beard, his eyes — all would change as the film progressed.

Friberg painted eight portraits, 10.5" x 8.5", oils on artist’s board, of Charlton Heston as Moses showing how the actor aged through Cecil B. DeMille’s epic:

Just as Friberg’s scenes dictated how sets were built and dressed, these Heston portraits were guides for the professional makeup artists, especially the gifted Wally Westmore, the makeup supervisor.

Doing the makeup of an actor, particularly one as important as Heston as Moses, through his long and aging adult life, can take several hours each day of shooting. Some scenes may take days or weeks to complete, and the actor had to look the same every day.

The paintings were unsigned and unknown. On January 23 of this year, I was approached by the owner’s intermediary wondering, in a matter of urgency, if I could identify the artist. There was a hope they might be by Friberg.

The eight paintings are indeed by Arnold Friberg. Although unsigned, his hand is all over the portraits, beginning with the distinct calligraphy of the captions.

They have never been published. And this column is the first time they have been disclosed to the public!

The appearance of these portraits is one of the most important Friberg discoveries of recent years. They link three fabulous names: Arnold Friberg, one of the 20th Century’s most celebrated illustrative artists; Charlton Heston (1923-2008), one of Hollywood’s greatest stars and Academy Award winner; and Cecil B. DeMille (1881-1959), who stood as an innovative filmmaking giant. 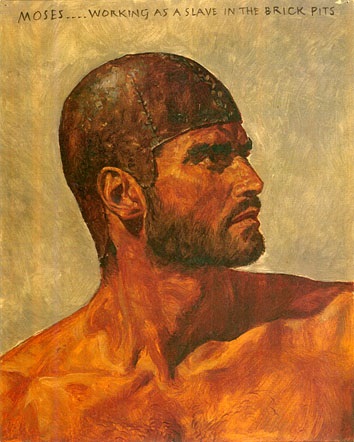 Moses, Working as a Slave in the Brick Pits 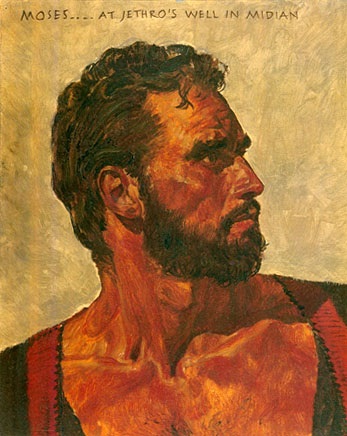 Moses at Jethro’s Well in Midian 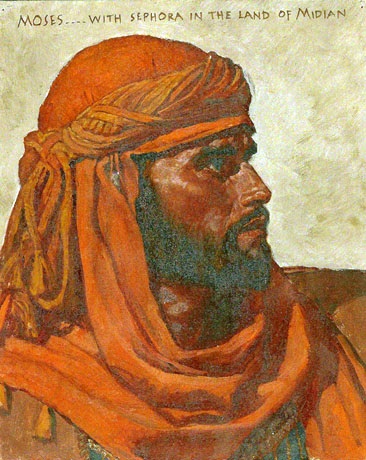 Moses, with Sephora in the Land of Midian 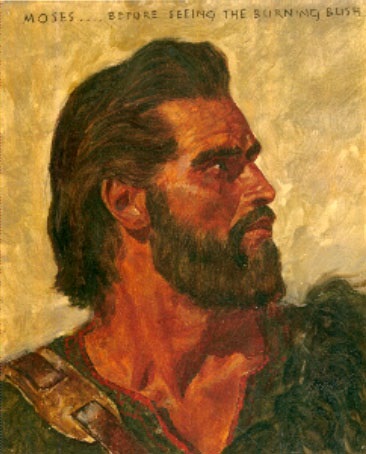 Moses, Before Seeing the Burning Bush 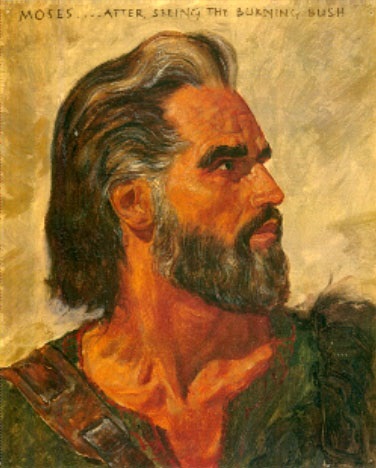 Moses, After Seeing the Burning Bush 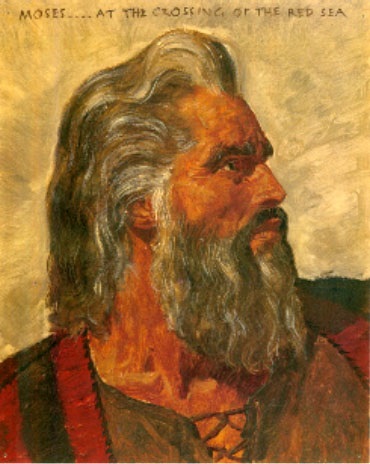 Moses, At the Crossing of the Red Sea 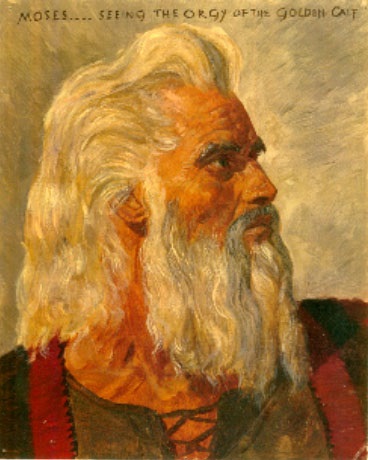 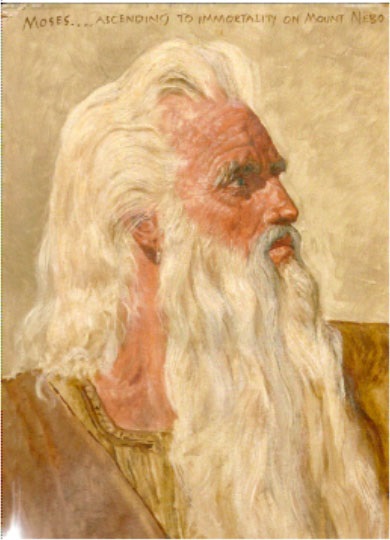 Moses, Ascending to Immortality on Mount Nebo (This painting is 5 1/16" taller than the others. Friberg had to lengthen the dimension to accommodate the long beard.)