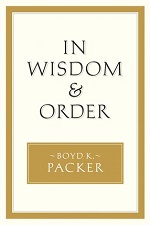 Boyd K. Packer, President of the Quorum of the Twelve, borrows a phrase from King Benjamin for the title of his new book In Wisdom & Order (Deseret Book 2013, 260 pages in hardcover, $25.99). It’s a collection of 28 talks from General Conference, CES firesides, mission presidents’ seminars, and funerals over a quarter century.

President Packer has always told as it like it is, boldly and without apology, and the talks here are no exception. Under sections titled “Gospel Foundations,” “Principles for Perfection, Priesthood,” “Youth and Family,” “Teachers and Servants,” and “Lessons from Our Leaders,” subtopics include “planned” parenthood (meaning deliberate parenthood and parenting) and spiritual self-reliance.

His classic 1997 talk on finding balance between family time and too many Church activities should be reread: “No service in the Church or community transcends that given in the home.”

The book appeals to audiences of various ages, from youth to parents to mature members of the Church.

The author quotes snippets of poems and hymns he’s recited in talks, as well as words from other general authorities. A real treasure of this collection is the talks he gave at the funerals of Presidents Benson, Hunter, and Hinckley, as well as his Ensign biography of Spencer W. Kimball.

The origin of each talk is given in a footnote on the first page of each. Also helpful is a good index.

This one’s a keeper! 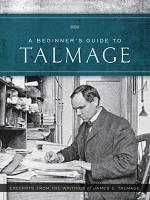 James E. Talmage, a well-educated and prolific LDS writer from another generation, authored Jesus the Christ and The Articles of Faith as well as a dozen other substantial volumes. How he came to do that makes for an interesting story in itself, and compiler Calvin R. Stephens does a fine job of laying it out for us. In fact, he makes Talmage a lot less daunting and a lot more human.

Charming stories from Albert L. Zobell, Jr.’s, compilation, The Parables of James E. Talmage, give an inside glimpse into the man who was a geology professor, insatiable learner, and beloved apostle (8,000 attended his funeral in 1933).

How could you not like a man who wrote this: “Early in life I realized that I would have to live with myself more than with anybody else, and I have tried to so live that I would be in good company when alone.”

Beyond the personal background (including how he struggled to gain his own testimony as a teenager), the book offers excerpts from Talmage’s own writings under a dozen chapter headings, among them “The Godhead,” “Mortal Probabation,” “Church Government,” and “Responsibility of the Covenant People.”

Explicating doctrine, citing scriptures, and illustrating points with his own stories, Talmage illuminates more than 100 topics.

With the essence of all his published work in one convenient place, this handy reference is indeed a fine effort at untangling Talmage.