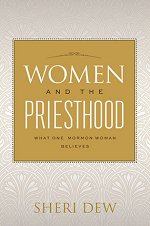 To the resurfacing discussion of being a modern woman in a traditionally patriarchal church, Sheri Dew, Deseret Book's CEO, voices a reasoned view in Women and the Priesthood (215 pages in hardcover, $21.99). She and the publisher are careful to point out with the subtitle that this book contains "What One Mormon Woman Believes," even though the author is obviously not alone, historically nor currently, in her views.

Having struggled through the era of the Equal Rights Amendment and women's lib myself during my early years as a wife and mother, I found Dew's sincere discussion refreshing, enlightening, and heartening. And I have absolutely no argument with the tenet that righteous women can have a profound influence in the world. They can and they do.

The author, who is single, a self-described tomboy, and a former member of the Relief Society general presidency, observed LDS women around the world for years but was finally moved to put her beliefs in book form because of the attention the Church has gotten recently.

Dew acknowledges the risk she's taking, realizing she's inviting criticism by publishing the book. "I am not a feminist," she asserts early on. "But I am pro-progression," favoring opportunities for growth for both women and men.

She makes no claim to know or understand everything and admits she sees "ways in which the participation of LDS women in the Church could be further enhanced." Yet, whether or not anything changes in this regard, she says, it won't affect her testimony:

"I've had far too many witnesses that the gospel is true and that the keys, power, and authority of the Savior's kingdom have been restored to let organizational issues discourage me."

Dew declares the doctrine on women to be ennobling, enlivening, and motivating. She explains foundational doctrines to dispel misperceptions about the Church and its members today. She calls polygamy "a lingering cloud of misunderstanding" that complicates the issue.

She discusses ambiguities women face in the Church and in life, as opposed to the more straightforward path young men are expected to follow. She makes a good argument for the equal responsibility and influence -- if not authority -- LDS women have, quoting general authorities and giving examples from history as well as her own experience to demonstrate the point.

She states the doctrines clearly, and her personal stories come across as genuine. Blank pages are supplied at the back of the book to enable readers to add their own thoughts on each chapter, which expands on Dew's summary: "Women Have a Divine Errand; God Expects Women to Receive Revelation; God is Perfect and So is His Son; Women are Vital to the Success of the Lord's Church; Both Women and Men Have Access to God's Highest Spiritual Blessings; God Reserved the High Privilege of Motherhood for Women; and Converted Women Can Change the World."

A useful index is provided, and internet links and codes lead to further information and videos.