Art forgery and art theft are among the most lucrative crimes in the world, along with drugs, slavery/prostitution, hi-tech frauds, and arms trafficking. Because art crimes don't usually kill or maim, the specialized police fighting them are comparatively few -- and usually non-existent, even on large forces.

Art theft includes not only stealing things off walls but widespread archeological theft from graves and digs. The international market for art -- good and bad lumped together -- amounts to billions of dollars and beckons to operators on the dark side.

Recently a friend of a friend asked me about the probable authenticity of a painting by a significant French artist of the early 20th Century, which he had been offered. What might it be worth? Although the painting was located in a third-world country, he might be willing to bring it to the United States for examination.

I searched through database records going back more than 20 years, looking at illustrations of hundreds of paintings and drawings by the artist. I found prices ranging from a few hundred dollars to a few million.

The painting in question was a portrait, and the artist painted lots of portraits. That was a good sign and a warning. Good, because it was in harmony with what the artist liked to paint. A warning because forgers like to fake something that will seem appropriate.

Of course, my friend's painting did not appear on any auction records. I did not expect it to.

In The Fabulous Frauds, Fascinating Tales of Great Art Forgeries, I stated that any work of art must pass four general tests:

The first three of these lie in the realm of art historians and esthetic experts. The fourth belongs to the lab scientist, to men like Dr. Edmond Locard, the subject of last week's column, specialists who have at their beck and call an almost incomprehensible range of processes and equipment, from simple test-tube chemical tests to the high-tech equipment, some of which did not exist a few years ago.

Much scientific examination is too expensive to be used by individual collectors or dealers.

In Bethesda, Maryland, I was introduced to Dr. B, a physician who came from a well-to-do Spanish family. I believe he had come to the United States to avoid the Franco regime. With him he brought several paintings that had been in the family for a very long time. One was a Madonna attributed to Raphael. Was it a genuine Raphael? He wanted to know.

I took the matter to the late Lester Cooke, the chief curator for the National Gallery of Art, a friend who confided to me that he quoted my four steps, outlined above, in some of his lectures. Cooke admired the painting but was unwilling to give an opinion about its authenticity.

Working with the museum's curators was a young PhD on loan from one of the important museums in Vienna. He was a specialist in Raphael drawings. His opinion was sought.

During Raphael's time, artists of his stature employed assistants who sometimes painted copies of their master's work, as did admirers who might come along later. The masters themselves sometimes copied other masters. After all, photography did not exist.

So my friend's Raphael might be a pure Raphael, might be a hybrid (part Raphael and part studio assistant), might be an early replica of the original, might be an out-and-out forgery intended to deceive.

While creating a work of art, an artist may decide to change what he has painted. He paints over the part of his canvas, panel, or wall that displeases him and paints something else. Underneath his final version is the hidden evidence of his disliked earlier attempt(s).

Not knowing the rejected version, a studio assistant, a copyist, or a forger will imitate the work only in its final form. The discovery of an echo under a painting may be an indication that the painting is genuine. Such a discovery is not a full-blown proof, but it is an important indication.

As a first scientific test, Dr. B's Raphael needed to be x-rayed. Where? How? At the time the National Gallery's science labs were in Pittsburgh, and they probably would not be made available to a private party. Dr. B was on the staff of the Washington Hospital Center, the sprawling complex in the District of Columbia. The hospital had radiology equipment big enough to handle the large painting.

Of course, no one at the hospital had ever x-rayed a painting. There were lots of questions about how to do it. Word got out, and when we took the painting for examination, a sizable contingent of hospital staff gathered to see it done.

The x-rays clearly showed that there were ghosts of earlier intentions underneath the final image. Whoever had painted the Madonna had significantly changed his original attempt before completing the painting.

This was a good sign, but it was not enough to convince the doctor from Vienna one way or another that the Madonna was a genuine Raphael.

The next steps would have been chemical and spectroscopic examinations of the paint. There are laboratories in Europe and America that are attempting to catalog the pigments and concoctions used by master painters.

Every artist's palette is made up of many personalized mixtures of pigments, liquids, and additives. Spectroscopic analysis of any spot of color can yield the identification of the elements used to make the color. They are as identifiable as fingerprints.

There were many master painters, and they didn't always do things the same ways throughout their long careers. This research had a long way to go when Dr. B's Madonna was examined.

Paint analysis is difficult and demanding, and the scientist must be careful. For sake of argument, let us assume the Raphael is genuine. Sometime in its long history a restorer has brightened or repaired a spot using a pigment that was unknown in Raphael's time.

If the examiner happened to take a microscopic sample from where this pigment was used, it could condemn the entire painting. Fortunately, the best examiners wouldn't be caught in that error.

I wrote three "Moments" columns about Han van Meegeren and his many forgeries. The most famous was his imitation Vermeer, Supper at Emaus. When he painted it he used the most expensive pigment known to artists, lapis lazuli, which was what Vermeer had used for blue.

Van Meegeren spent as much as $2000 for a small amount shipped from London, a prodigious sum way back in the 1930s. Later he abandoned the expensive element because his fakes were so quickly accepted as genuine that he didn't need to be such a perfectionist. 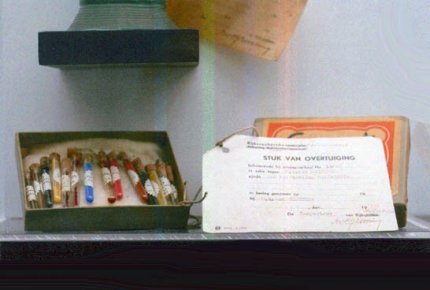 Samples of pigments used by Han van Meegeren when making his paint and concocting his many forgeries, notably those of Vermeer.