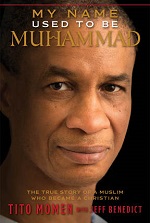 Conversion stories abound in LDS culture, often involving conversion from another Christian denomination. In a new 278-page memoir, Tito Momen counts the cost of converting from Muslim to Christian and Latter-day Saint as he recounts his life’s journey in My Name Used to be Muhammed (Shadow Mountain 2013, $21.99 in hardcover).

Born in Nigeria to a strict Muslim family with a distant, abusive father who was grooming this youngest son to be the imam (village religious leader), the boy learned to read by copying every word of the Qur’an. The book jacket gives away the fact that Tito’s conversion led to 15 years in a harsh Egyptian prison. Yet, it’s the journey between boyhood and the prison term that is the meat of the narrative produced by Jeff Benedict.

The book is written for an audience that’s not just LDS; in fact, Momen’s conversion process and baptism into The Church of Jesus Christ of Latter-day Saints are barely mentioned. While the author provides insights into the culture of Islam, more time and attention are devoted to descriptions of the darker aspects of an isolated, less-educated religious community where women must never show their faces nor their affection for their children, and where punishment is swift and harsh.

The treatment Momen received from family, school, and government officials as an “infidel” during his high school years in Damascus and Cairo takes center stage in his story.

Although the descriptions and experiences of his university years of drinking and womanizing add contrast to Momen’s transition to Christian and Mormon, they could have been told without quite so much graphic detail. (If this were a movie, it would be PG-13; it’s most certainly not for younger teens.)

The place where this works better is in descriptions of prison life, with torture, malnutrition, filth, and fear contrasted with small acts of kindness that showed Momen “God was watching over me.” (He managed to have a Bible and a Book of Mormon smuggled in because of his ability to teach English to a notorious criminal.)

There are some gripping moments. The reader can feel the sense of betrayal along with Momen when his planned escape to Canada is foiled in Spain, where authorities meet him as he departs the plane, detain him for hours, then hurriedly escort him onto his “next flight” — right back to Cairo to face unjust charges and a life sentence.

Momen’s reconciliation with his father as the older man is dying comes across as tender and compassionate, underscored by Momen’s desire to greet him on the other side with open arms that failed to embrace his son in this life.

The ending seems rather abrupt, stopping at Momen’s release from prison in 2006 with congestive heart failure and his being exiled to Ghana (which has a relatively large LDS population). It jumps from there to his standing on Temple Square, leaving the reader to wonder exactly how he got there and where he is now.

These criticisms aside, My Name Used to be Muhammed is a compelling and faith-affirming book that reminds us that God does hear and answer prayers.