In broad terms, folk art can be two-dimensional, sculpted, or assembled. James Hampton’s The Throne of the Third Heaven of the Nations’ Millennium General Assembly is one of the most perplexing and spectacular examples of the latter.

Hampton (South Carolina, 1909-Washington, D.C., 1964) spent more than 14 years creating his masterpiece from gold and silver aluminum foil, Kraft paper, and plastic over wood furniture. His vision is huge: 27 feet from left to right, by 10 feet by 14.5 feet.

It will smack you right in the eyes when you enter the Smithsonian American Art Museum. Not all of it is on view: consisting of 180 components, it is too big.

Hampton worked in a rented garage, “transforming its drab interior into a heavenly vision, as he prepared for the return of Christ to the earth. The Throne is his attempt to create a spiritual environment that could only have been made as the result of a passionate and highly personal religious faith.

The total work suggests a chancel complete with altar, a throne, offertory tables, pulpits, mercy seats, and other obscure objects of Hampton’s own invention. His work also includes plaques, tags, and notebooks bearing a secret writing system which has yet to be, and may never be, deciphered. [from the exhibit label] 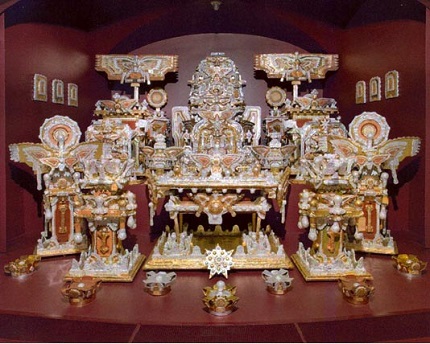 At first, the brightness of the foil makes one wonder if everything has been crafted of silver. The center of vision is the seven-foot-high throne. To its right, objects refer to the New Testament and Jesus. To its left, the Old Testament and Moses. Everything is much more complex than this description. When created in the Carolina garage it stood on a three-foot platform. This was his only work of art.

Everything was made from discarded materials — old furniture, derelict planks, cardboard cutouts, jelly glasses, exhausted light bulbs, desk blotters, mirror fragments, electrical cables, and other found objects, some scavenged from second-hand shops and the federal office buildings where he worked.

Of a simpler craft, and more beautiful and less perplexing, is this carving by Frank Brito (1952-2005) of Christ Child of Atocha. This elegant folk carving came from the collection of Chuck and Jan Rosenak, whom I wrote about last week.

The Spanish city of Atocha was occupied by the Moors in the fifteenth century. Many Christians were imprisoned and only children were allowed to bring food and water to the captives. One day a child dressed as a pilgrim carried a loaf of bread and a canteen of water into the prison. When he had given food and water to every man the guards were astonished to find the basket and canteen were still full. The people of Atocha believed that Christ had heard their prayers and had come back in the form of a child to save them. Frank Brito carved this figure holding out the basket of bread to emphasize Christ’s rewards for the faithful.

Another sculpture I like consists of 15 separately carved figures, Yeibichai Dancers with Medicine Man and Patient by Tom Yazzie (1930). The male figures average nearly a foot high, the women less. They stand on a platform 51" long.

This is another Rosenak discovery.

The Yeibichai are supernatural beings who created the Navajo people and taught them how to live in harmony with the universe. This piece represents the Nightway ceremony of the Navajos, in which a medicine man calls upon the power of the Yeibichai to heal someone.The ceremony also involves a dance with fourteen people: six men, six women, a dancer representing the Talking God, and one representing the Water Sprinkler. Tom Yazzie has depicted all of the participants in their ceremonial masks and headdresses to represent the Yeibichai. [The Luce Center label.] 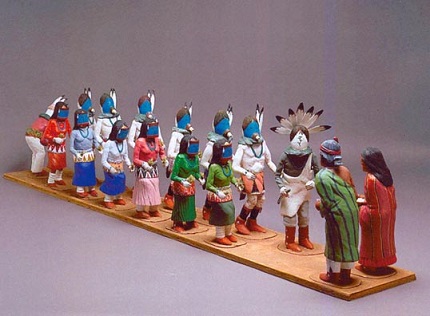 These last two pieces came to the Smithsonian American Art Museum as a combination gift from the Rosenaks and a purchase funded by Luisita L. and Frank H. Denghausen Endowment. The Luce Center is located on the third floor of the museum.

When Pierre l’Enfant was laying out Washington, he planned a space for the construction of a national church or a pantheon to memorialize our heroes. Instead, in 1836, President Andrew Jackson authorized the site for the construction of a fireproof national patent office as a place where models of inventions could be displayed. It is one of the oldest public buildings in Washington and considered one of the finest in the country of Greek Revival public architecture.

The building was expanded periodically and used by different government entities. During the Civil War it was a military hospital.

When the building was scheduled for demolition, President Dwight D. Eisenhower interceded to save it. After extensive modernization, the south half of the building became the National Portrait Gallery, the Archives of American Art, and, on the top floor, an art library, where I spent many hours, although the Library of Congress is more complete.

The northern half houses, as it is now known, the Smithsonian American Art Museum. This is the most comprehensive repository of American art in the world, with more than 7,000 artists represented. The museum is deeply involved in educational activities. These include a printmaking studio.

On two occasions when my daughter Anne Bradham, a watercolorist, (See Moments in Art, “Along My Questing Path”) was in high school in Maryland, she was excused from regular classes to take a two-week workshop in making prints. 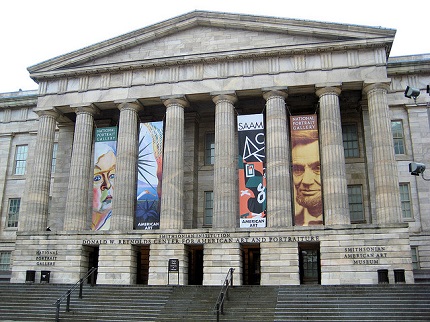 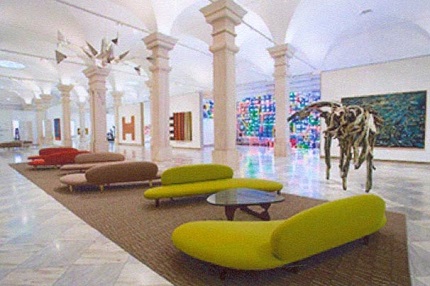 Lincoln’s Inaugural Ball was held in this room, one of the most elegant in Washington, D.C., which is now part of the American Art Museum.

Washington is full of extraordinary museums, but places like this one, the Phillips Collection, the Textile Museum, the Renwick, the Corcoran, Dumbarton, and others that are not on the Mall are often overlooked by tourists.

But, as the French say, they are worth the voyage.