In late 2012, as President Thomas S. Monson was approaching the five-year mark as prophet and president of the Church, Deseret Book released a thick volume of his General Conference addresses over the years. 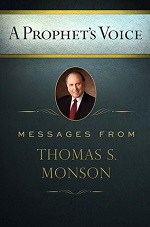 Divided into two sections, A Prophet’s Voice: Messages from Thomas S. Monson contains the texts of 19 talks from his recent years as the Prophet (including the date and session in which they were given), plus 38 “Other Classic Messages” on service, the worth of souls, the hope of the rising generation, self-mastery, and the path of a disciple.

The latter 38, unfortunately undated, were selected from previous decades, from the time he was first sustained as to the Quorum of the Twelve in 1963.

The only illustrations here are the ones offered in classic Thomas S. Monson storytelling style, but they are memorable, insightful, and absolutely believable. Each message has footnotes, and both an extensive scripture index and subject index offer help in referencing the stories again or preparing talks (518 pages in hard cover, $32.99). 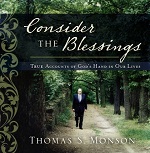 New in 2013 is Consider the Blessings, subtitled True Accounts of God’s Hand in Our Lives, a collection of thoughts and stories celebrating the 50th anniversary of President Monson’s call as an apostle. In a slim, square format, its 150 pages are beautifully decorated with color photographs and an appealing design that make it seem less of a study volume than a gift book perfect for browsing.

Yet, there is thought-provoking substance and depth in the one- or two-page accounts, and even when the stories do not come directly from President Monson’s own experience, he has first-hand knowledge of the people and events he speaks of.

There are touching, humorous, and inspirational accounts of how kindness melted the ice between a neighbor lady who confiscated balls mistakenly misdirected to her yard, an elder whose hospital roommate fasted for his surgery, personal experiences as a young bishop as well as an apostle, and how 3,000 youth in a cultural celebration for a new temple knelt in prayer for the essential Jumbotron to work.

In President Monson’s own words, “I never cease to be amazed by how the Lord can motivate and direct the length and breadth of his kingdom and yet have time to provide inspiration concerning one individual.” Readers will feel the same way. (Deseret Book 2013, $22.99 in hardcover). 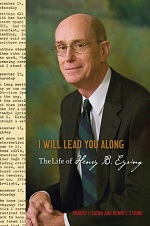 The first-ever biography of President Henry B. Eyring is out, and it’s delightful. I Will Lead You Along: The Life of Henry B. Eyring (Deseret Book 2013, 530 pages in hardcover, $32.99) is a collaboration by his son Henry J. Eyring and Robert I. Eaton. The inviting layout includes pullout quotes, black-and-white photos, selections from President Eyring’s personal journals in old typewriter style, and his own sketches of people and places over the years. The writing is conversational and easy to enjoy, and the text is well documented.

“Hal,” as his mother insisted on calling him, had early childhood impressions about his future family but was disturbed by his failure to marry as he served in the Air Force, earned a degree in physics (his famous physicist father’s choice), and continued to serve in the Church while earning a degree from the Harvard Business School. At 29, he felt his life had finally taken off when he met Kathleen Johnson and that early impression began to come into focus.

Throughout the book, the narrative deftly demonstrates how this young man became a loving leader of influence step by step, underscoring the book’s title. Readers of President Eyring’s biography will likely gain insights and see their own lives a little more clearly as they learn from the life of this beloved apostle. 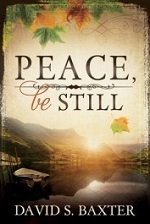 Who couldn’t use a little more peace in their lives? From Scottish native David S. Baxter, a member of the First Quorum of the Seventy since 2006, come personal observations and reflections in Peace, Be Still (Cedar Fort Publishing 2013, 113 pages in hard cover, $18.99). He invites readers to ponder his words and seek revelation as they answer, “Is our personal world bringing peace or turmoil?”

Quoting poems, scriptures, and other general authorities while sharing his own experiences, Elder Baxter offers wise words on peaceful places and perspectives as well as ways to find peace amidst death and adversity. The concluding chapter focuses, fittingly, on the Savior as the true source of peace.