The Impressionist friends of Gustave Caillebotte (see last week’s column) were devastated when their generous benefactor and fellow artist suddenly died. Even though the Impressionists themselves were in disarray, they all felt the loss. Official France, however, soon became aghast at the terms of Gustave’s will.

Caillebotte was only 28 in 1876, scarcely two years since the first exhibition of the Impressionists, when he drew up his first will.

“I beg Renoir to be my testamentary executor and to accept a painting of his choosing and that my inheritors insist that he choose an important one.”

The internal dispute among the artist that manifested itself in their fourth exhibition, in 1877, became even more contentious with their fifth showing in 1880. Gauguin participated for the second time, but he was not the cause. Disputes became challenges, with exchanges of explosive letters revealing the depth of the dissensions.

Monet and Renoir preferred to show at the official Salon. Degas accused them of treason, since it was Monet who had previously set down the condition that the artists should not be allowed to show with the Impressionists and the Salon at the same time.

It got worse because Caillebotte’s hand was in the selection of the artists whose names would be part of the show’s posters, which were the most important advertising medium in Paris. Caillebotte later wrote Pissarro, “Degas is responsible for our disorganization.” He wrote, “What talent, but what character.” He never hesitated to praise Degas’s art.

Without Monet, Renoir, and Sisley, the work of Degas drew the most attention. Caillebotte’s presence was eleven paintings.

Because of continuing disputes with Degas, Caillebotte refused to participate in the exposition of 1881. The American Mary Cassatt, one of Degas’s few friends, was included.

For the show the next year, Degas lead efforts to eliminate Caillebotte, who said, “I will retire to my tent and wait better days.” Nevertheless, he joined many of his friends for the show, including Monet, Renoir, Pissarro, Morisot, and Sisley. “The harmony would have been perfect had there not been the disagreement of Degas, caused by the exclusion of some of his friends, and the habitual absence of Manet.” (Marie-Josèphe de Balanda, Gustave Caillebotte)

Critically, the exposition was the best ever. Public hostility had been overcome. Time, the previous shows, and the support of dealer Durand-Ruel contributed to the reversal. Although represented by 17 canvases, Caillebotte, 34, was virtually ignored. It was his last large public showing in France. Six years later he sent six paintings for a small show at Durand-Ruel’s and eight to a show in Bruxelles. In both he was again ignored.

Caillebotte, living in a town down river on the Seine, continued to paint. He was a member of the Cercle de Voile de Paris/Paris Sailing Circle, and he spent a great deal of time designing, building, repairing, and racing sailboats. He continued to help the other artists, offering to support Pissarro. His home was constantly full of guests, and as the Impressionists disbursed geographically, he made efforts to keep them together. A local café became famous as their gathering point.

In February, 1894, Caillebotte became chilled while working in his garden. This lead to a cerebral congestion. He died of a pulmonary embolism. He was 45. There was an unfinished landscape on his easel, but he left behind about 500 finished paintings.

His will created consternation and scandal in official circles.

An 1883 codicil to his 1876 will specified the disposition of his collection of pictures painted by other artists. Twenty days after Caillebotte’s death, his executor notified the Director of the Academy of Beaux-Arts, Henri Roujon, of the collection: 67 paintings by the masters of Impressionism, Manet, Monet, Renoir, Pissarro, Sisley, Degas, and Cézanne.

In today’s market, it would be worth billions.

The collection could not be given to the French State, which would stow it in attics or disperse it to unimportant provincial museums.

Eventually, after passage of sufficient time, it would go to the Louvre

Roujon told his superiors that the bequest was “a delicate matter.”

These 66 paintings were entirely outside of the cultural politics of the official establishment. The legacy was up against the same academism that dominated the Paris Salon. A spokesman charged that showing the collection at the Luxembourg would lower all of society and bring about “the end of the nation, the end of France.”

Several professors at the Beaux-Arts threatened to resign if the collection were accepted.

The heads of the Academy, the Luxembourg, and the National Museums were called together to examine the terms of the will and the positions of Renoir, the executor, and Martial Caillebotte, the artist’s younger brother.

A consultive committee representing the museums recommended that the gift be accepted, but the Administration festered with tergiversation (my favorite, seldom-used word, both in French and English, meaning to beat around the bush). They argued there wasn’t sufficient space in the Luxembourg, it would be years before there would be enough money to make accommodations, some of the paintings weren’t very good, only the best ones could be accepted.

These noises upset the Impressionists. Monet wrote, “It is necessary to obtain from the Administration of Beaux-Arts agreement that none of these painting given by Caillebotte can be relegated to attics or sent to the provinces.”

Martial observed that from the beginning the head of the Luxembourg took the position that the museum could not hang the show. The future director said the collection would be accepted but could not be hung until two years later. Then several days later the Government said only a part of the collection could be shown. Renoir and Martial opposed the offer, which did not conform to the will.

Not until 1896 did a State Council authorize the Consultive Committee of the National Museums to make an official choice: of the 67 paintings, 38 were accepted and 29 were refused and returned to the donor’s inheritors. This compromise would take effect after the unanimous consent of the artists represented.

Renoir chose a Degas painting as his executor’s pay. Renoir originally had selected one of his own paintings from the accepted group, for which he had received a lucrative offer, but Martial convinced Renoir he would be better served in the long run if the picture remained in the public collection. 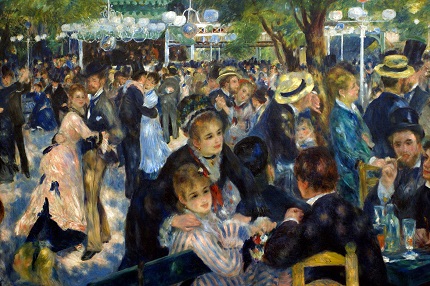 Instead, Renoir chose a work by Degas, keeping that painting from being among those which would be enshrined. Degas was furious. But they had never been friends.

In 1904 and 1908, the family again tried to give the 28 rejected works to the French government. Both offers were refused. Martial Caillebotte instructed his wife and daughter to never deal with the National Museums after his death.

In 1928, the French government had a change of heart and attempted to claim the 28 rejected paintings. The request was repudiated by Martial’s widow.

Most of the rejected paintings were then sold to the irascible Dr. Albert Barnes [see Moments in Art No. 48, “Where’s the Beef”]. The Barnes Collection can be seen a long way from Paris, in Philadelphia.

The Caillebotte Collection comprised some of the greatest paintings ever created by the Impressionists. They became the nucleus around which paintings by other modern French artists were assembled and ultimately installed in the Jeu de Paume museum at the end of the Place de Concorde. The collection grew and finally outgrew the small, elegant museum.

A beaux-arts unused railway station across the Seine from the Louvre, the Gare d’Orsay, was converted to show mainly French art created between 1848 and 1915. (There is only one Mary Cassatt in the grandiose collection.) 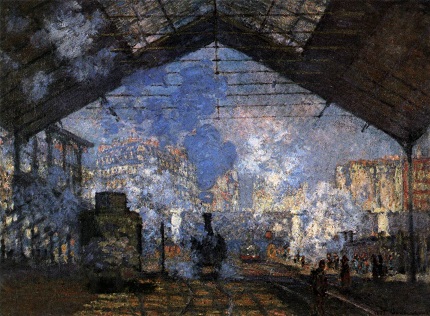 The Musée d’Orsay was opened in 1986. The upper-level floor showing a heart-stopping collection of Impressionist and Post-Impressionist paintings is the highlight of that vast museum. Among them is the Caillebotte bequest, some of the greatest paintings among the great.

Interior of the d’Orsay Museum, Paris