Time for a prize winner, perfect for autumn, great to pin and save for Thanksgiving. This savory tart is creamy and crunchy, sweet and flaky. The only problem is that it is so good that you’ll be asked to make it again and again. It won 3rd place in Imperial Sugar’s 2012 Homemade Holidays Recipe Contest. 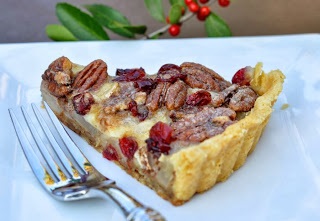 Process 1/2 cup of the butter, the flour and the white sugar in a food processor or blender, until crumbly. Add egg yolk and water and process until dough begins to form. Knead on lightly floured surface until smooth, then wrap and chill for 30 minutes.