Although modestly successful in Delft and The Hague during his lifetime, his name quickly disappeared from art histories. Although recognized now as one of the greatest Dutch artists, his paintings became attributed to other artists. 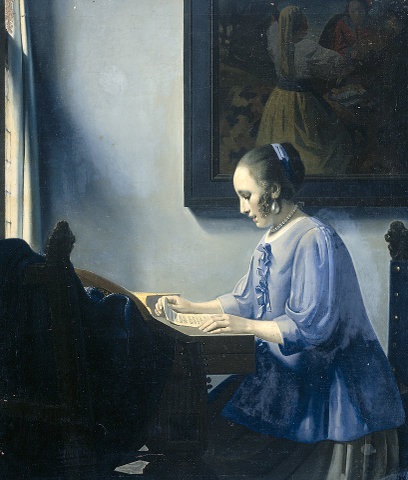 In mid-19th century French political journalist and art critic Théophile Thoré-Burger became so enamored with View of Delft at the Mauritshuis Museum in The Hague that he began searching for other paintings by the same artist. By the time he finished his discoveries, he had resurrected Vermeer by attributing 66 pictures to him.

Today only 34, 35, or 36 pictures (depending upon who is making the list) are recognized, but if Han van Meegeren had been successful, there would have been several more. For a decade his Supper at Emaus was looked upon as one of Vermeer’s greatest paintings. Two others were displayed by the National Gallery of Art in Washington, D.C.

In 1995, the National Gallery of Art managed to gather an exhibition of 23 of these legitimate paintings, including the seminal View of Delft. For me, that painting was a magnetic draw, and I kept returning to the room where it was displayed, one of the most beautiful and magical landscapes I have ever seen.

Tracy Chevalier created an imaginary Vermeer in the 1999 best seller Girl with a Pearl Earring, which four years later became a popular motion picture starring gorgeous 19-year-old Scarlett Johansson, a breakout role for her as an adult.

But the National Gallery retrospective and the fictional book and its movie came half a century after Supper at Emaus destroyed many of Europe’s most gloried art experts and storied collectors. 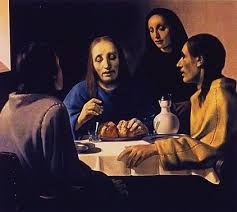 If you were to believe Han van Meegeren, his first forgery was Christ and the Disciples at Emaus, also known as Supper at Emaus, and he got the idea of painting it simply because he wanted to fool Holland’s most renowned art expert, Dr. Abraham Bredius.

In truth, many years earlier two of his fake Vermeers, one of them The Lace Maker, had been acquired by the National Gallery. The Lace Maker was sold to donor Andrew Mellon by Sir Joseph Duveen, at the time the post powerful art dealer in the world.

Bredius, eyes weakening after 82 influential, honor-filled years, hovered between the adulating crowd and the Vermeer masterpiece they had thronged to Rotterdam’s Museum Boijmans to see. It was 1937, and behind him lay a lifetime of useful scholarship. 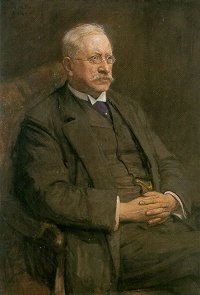 In the eyes of many he was the leading authority on Dutch Old Masters, as a series of erudite exhibit catalogs and books attested. Since 1885, he had commented on every important piece of art in Holland. His monumental work on Rembrandt van Rijn was hardly off the press.

But in 1937, the world was full of Rembrandt paintings, perhaps 700 of them. Bredius could be sure that future scholars would revamp this canon, and his work would become less important. Even so, his name would be forever remembered because of his discovery of a great Vermeer, the 37th painting added to the known 36.

Emaus had been revealed to Bredius at Monte Carlo by a mysterious lawyer, G. A. Boon, a former member of Holland’s lower chamber.

Experts had theorized that Vermeer had done a series of religious paintings — most of them lost — influenced by Caravaggio. The one not lost was Jesus in the Home of Mary and Martha. Emaus fit perfectly into that speculative history. Bredius wrote a long and glowing article about the painting for England’s Burlington magazine, probably the most important connoisseur publication of the time. 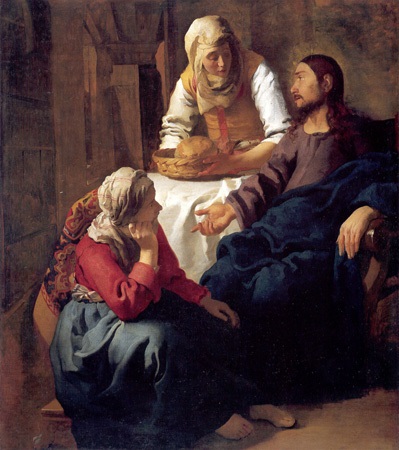 The greatest authorities on Dutch paintings, and the moneyed collectors, fell in line. The triumphant official museum unveiling was witnessed by the queen. It was also seen by Van Meegeren, whose triumph was limited to his inner gloat.

Because of his scurrilous attacks against the Dutch art world in De Kemphaan (see last week’s column), he and Jo--his one-time mistress, now wife–decided to leave the Netherlands. Because Han spent so much of his income on frivolity, it took Jo three years to set aside enough money so they could buy a car and leave.

The car broke down in Roquebrune on the French Riviera. They rented a nearby villa, and there, after a quick trip home to collect materials, Han began working on what would become the most famous forgery in 20th- century art fakery. It took him six years. 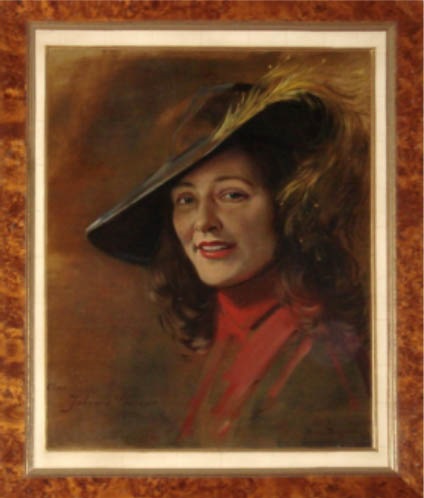 Han van Meegeren. Portrait of his wife, Johanna, an actress. He painted portraits to cover up his more nefarious counterfeiting.

For their bread and butter, Jo exploited her natural gift as an actress to beguile strangers. She gave the right parties for the right people, and her husband began painting portraits. At the start he averaged a couple of $300 portraits each month. This fee grew to $1000.

It was a continuation of Jo’s and Han’s double life, although he maintained until he died that Jo knew nothing of it.

Han began Emaus with a large, unimportant, unsigned painting, The Resurrection of Lazarus, from about 1650. Working in a room which, he said, not even Jo was permitted to enter, Han removed the canvas from its original stretcher, being careful to keep the original tacks, and attached it to a piece of plywood.

Using pumice, he began laboriously scraping off the image on the canvas. If he left any image, x-rays would detect it. He took care not to remove the weathered original ground, whose age and crackling would be necessary for a successful forgery.

In a few spots the original image had fused with the canvas and could not be removed. Han would need to incorporate these into his new image.

Old canvas is easy to find. Old-appearing paint is not.

Han ground and concocted his paints using only pigments that were known at the time of Vermeer, including very expensive lapis lazuli for which he paid as much as $2000 for a shipment from London. He manufactured his own white lead and used cochineal for red. When painting he used only badger-hair brushes, the kind Vermeer used, since a strand here or there might become entrapped in the paint.

Oil paintings may take 100 years to dry. Van Meegeren didn’t have that long. He needed to find a medium that could be quickly dried out. He experimented for four years before he found a suitable answer, a combination of phenol, formaldehyde, alcohol or turpentine, and synthetic lilac oil.

The drying process would be finished by baking the picture. For how long? At what temperature? More experiments. The answer: 105 degrees Centigrade.

Now all he had to do was paint a genuine Vermeer.

Han took three months off to rest and to go to Hitler’s 1936 Olympic Games. When he was not participating in the revelry, his mind must have been on the painting he was about to commence.

It would not do to paint a replica of an existing painting, although incorporating a few elements from them could help authenticate the painting. Because of the existence of Jesus in the Home of Mary and Martha, art historians believed that Vermeer might have depicted other events from the life of Christ. Han had the answer to that quest. (Working with Théo Wijngaardem he had previously painted some Vermeers from that inspiration, but these were facts Han van Meegeren would not reveal, and those were never the technical masterpieces of Emaus.)

For six months in the Villa Primavera Van Meegeren became Vermeer. He reduced the size of the painting a bit and kept the pieces of leftover stretcher and canvas as souvenirs — and possibly proof.

The completed painting could not be associated with Van Meegeren in any way. Intending the painting to be examined by Bredius, Han took it to Paris to show it to Boon, saying that it was owned by a woman named Mavrocke from an old Dutch family that had settled in Italy and was troubled by Mussolini. She asked him to sell it for her. She had smuggled it out of Italy, but Boon should never tell this to Bredius. He should tell Bredius he was representing the estate of someone living in France.

Boon took Emaus to Bredius’s retirement villa in Monaco. Bredius asked for 48 hours to study it. Bredius was thrilled, and possibly feeling that some other museum or collector would hear about the painting, he lost no time working out the purchase by the Boijmans Museum in Rotterdam.

Emaus became subjected to the scrutiny of the museum’s experts. Others were consulted. The museum’s restorers repaired damages Van Meegeren had carefully inflicted on the painting. They took the painting off its stretcher and relined the back with new canvas.

None of these examinations discovered that the painting was a fake. The fabulous Vermeer would be unveiled to the world with great fanfare and hung in an important place in the museum.

Han van Meegeren had declared all his life that someday Van Meegerens would hang in Holland’s best museums. Now one did. Whatever his original intentions were, he found the profits enjoyable. And he could silently gloat that he had flummoxed the great Abraham Bredius.