Let me say this right up front. I always assumed I’d die while I was young enough to leave a good-looking corpse.

Longevity does not run in my family. My mother died at age 42. My grandmother also died at age 42. Everyone in the family assumed that I was going to be a proper Southern lady and follow their good example. Nobody was more surprised than I was when I saw my forty-third birthday. I found out later that my sisters had created a “dead pool,” and were making wagers as to which month of my forty-second year was going to be my last.

When I was younger, the fact that I wasn’t going to be a good-looking corpse wasn’t even part of the equation. But then God played a whopper of a practical joke on me (or maybe it was a tender mercy), back in 1982, when I gained 140 pounds in six months. It was the best thing that ever happened to me as far as my character was concerned, and the worst thing that could have happened to my self image. I went from being a human being to being a circus freak in six months flat.

But I always assumed that despite my super-sized frame, I was going to die young enough that I would have a presentable corpse, if all the other stars of good-looking-corpsehood had been properly aligned.

But then I celebrated my forty-third birthday, and then my fifty-third. I almost didn’t celebrate my sixty-third, because it happened earlier this year, less than a month after I was released from my three-month hospital tour. I was still as frail as a dandelion puffball, but I was around to celebrate nonetheless. I felt ancient, but because I wasn’t sturdy enough to look in a mirror I naturally assumed I still looked like the same old Kathy.

Thanks to my illness or the drugs I took to cure it, most of my hair fell out. You can pretty much guess people weren’t taking pictures of Kathryn H. Billiard Ball. But now that my hair is coming back with a vengeance, the cameras are appearing. And what they’re taking pictures of is not the Kathy I remember, but some stranger who is a little old lady — a wrinkled creature I do not know, and do not even care to know.

She looks more than a little befuddled, as though she might forget her name or what she had for breakfast or her all-important political party affiliation if she were not prompted to remember those things. She looks as though she could carry groceries in the bags under her eyes. 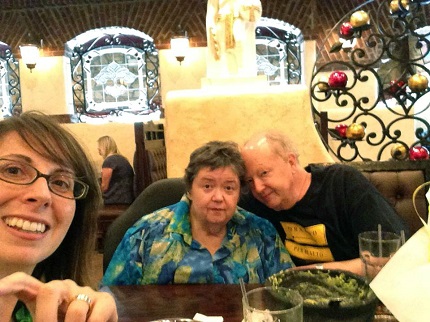 Here I am, with Fluffy and our friend Rosie. Who is that befuddled old lady, anyway?

Frankly, she scares me. I never intended to have wrinkles, and especially not wrinkles that could swallow small household pets.

In fact, the only advantage to being hugely fat is that hugely fat people do not have wrinkles. All my adult life, people told me how young I looked, and asked me the secret to my youth. I told them my secret in six golden words: “The fat pushes the wrinkles out.”

I lost a hundred pounds on the Coma Diet, and all of a sudden I have the wrinkles that your basic sixty-three-year-old person is supposed to have. I became a granny, but without the grandchildren to give me presents. 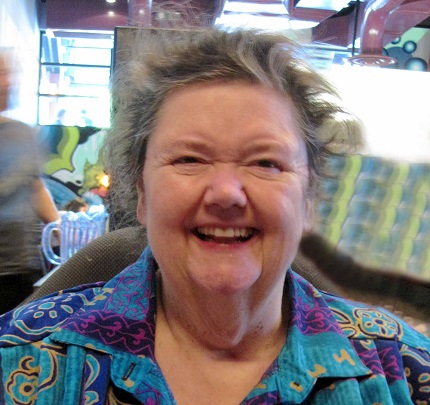 All the wrinkles; none of the grandchildren. Bummer.

I frankly had no idea I looked like a grandmother until my hair started growing back and people started taking those pictures. That one day with our friend Rosie aged me twenty years. Logistically, I understood I was twenty years older than Rosie was, but I didn’t know it viscerally until I saw those photographs.

Seeing those pictures last week, it was as though I had experienced twenty birthdays in five minutes. I was punched in the stomach by age, and it left me breathless in a way that all those other birthdays — even the big round numbers that always seem to send everyone else into a midlife crisis — had never managed to do. 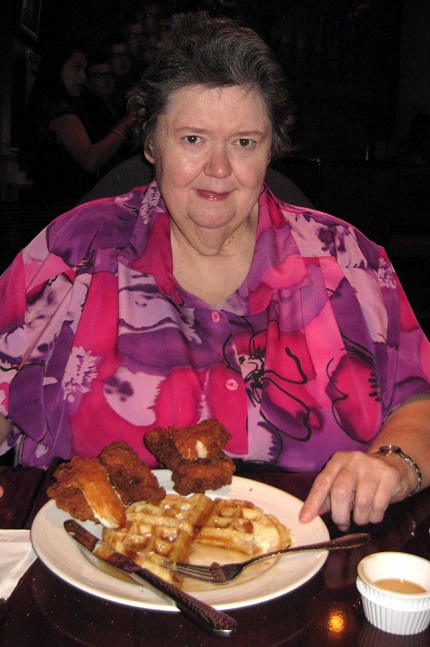 If you get old enough, you find yourself doing things no human being should ever do. Here I am, after ordering chicken and waffles. In my defense, I ate saved the chicken from the syrup and took it home for another day. And yes, that is my tongue hanging out in the picture. I’m pathetic, and I know it.

When I first saw the pictures that Rosie took last week, I was shell-shocked. I wanted to crawl in bed, pull the covers over my head, and lie there until — well, until I wasn’t old anymore. As if that was going to happen. Try as we might, age is one clock we just can’t turn backward.

But the more I thought about it, the more I realized that the pictures themselves are reminders of just how blessed I am.

First of all, I’m still here. With all the things that happened to me in that hospital (in those hospitals, actually), I should be dead. The fact that I’m not tells me that I still have things to do — things that are worthwhile enough that God chose to have me stick around for a while. This tells me life is going to be interesting, and that at least something I do will be important to somebody. I like that.

Second, the fact that I can be moaning (even in jest) about how I look shows that I am happier about myself than I have been in decades. Before the weight loss, I was so deeply ashamed of my appearance that having people take pictures of me was out of the question.

Now, I don’t care when the camera comes out. At least, I don’t care any more than any other wrinkled old granny is likely to care. That’s a huge step. I’m not skinny, by any means. In fact, I’m still a whole lotta woman. But I’m not so big that all heads turn when I enter a room, and to me that’s a blessing so overwhelming that most people cannot even fathom it.

Third, I am as healthy as an ox. I’m not going to say more than this, because there may be a whole column in that. But miracles have been done on my behalf, and I am keenly aware of them. Who would have ever thought I would be able to breathe freely in this life, or to be able to climb a set of stairs (if only I could walk, that is)? I am grateful for every breath.

Last, but certainly not least, I am continuing this journey through life as part of a synchronized set. As Rosie’s pictures showed, Fluffy has me matched — wrinkle for wrinkle. After all these years, we have grown into people who will laugh at each other’s jokes. We can be unemployed together, or share secret shopper experiences together, or he can even help me write my columns. The older we get, the more we are two halves of a whole, and I like that more than I can say. 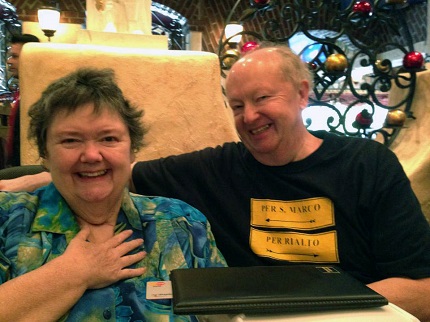 If you’ve got to get old, it sure helps to be half of a matched set.

I may be a ball of wrinkles in a wheelchair these days, but if that’s all people see, they aren’t seeing the whole story. The wrinkles and the wheelchair are temporary. One of these days, like a butterfly from its cocoon, I will emerge. I have no idea how I will appear on the other side of that veil we call death, but I know I will be my perfected self. And I know that I — just like you — will be unspeakably beautiful.