For more than a hundred years, Carmel and the Monterey Peninsula have pulled scores of painters to California. Of the many, John O’Shea was one of the best.

He was no mere painter of nearby surf and cypress. Taking long forays to Arizona, New Mexico, Mexico, Tahiti, and Hawaii, he painted landscapes and people. His portraits became famous and controversial. Though he painted in great bursts of energy, a stern discipline underpinned his power. 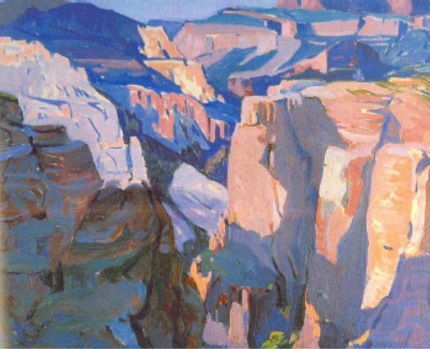 O’Shea was 16 when he left his native Ireland and landed in New York, where he briefly found employment with Louis Comfort Tiffany as an artisan engraver. He studied art and painted in Maine. In 1914 he moved to Pasadena, California, where he had a one-man show of 16 canvases that anchored his reputation.

He seems never to have disappointed the critics. An art reviewer for The Graphic exuded over the charm and luminous freshness of his color and his suggestions of the elusive, subtle California atmosphere. That was before lots of automobiles and aircraft factories, when the Los Angeles skies were as crystal blue as sea and desert air.

O’Shea soon betrayed his local followers. Trudging about the state, he found a place he liked better than Los Angeles, Pasadena, and Hollywood. Like Father Junipero Serra and maritime Captain Caspar de Portolá, he discovered the rock-split surf southward from Monterey.

For a thousand years the painter’s Irish ancestors had lived near Waterford, whose Celtic name meant Haven of the Sun. The place was not far from the sea. In Carmel, O’Shea found a new Haven of the Sun to answer what had been built into his genes. 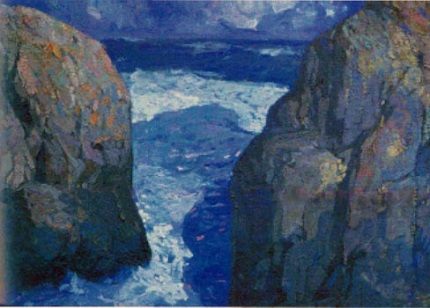 John O’Shea, Sea Beyond the Rocks. One of my favorite pictures whenever I visited Molly J. and my brother Richard.

He did not stick to Carmel. He loved the Grand Canyon and the Arizona desert. He loved the now rugged, now stoic, now tender faces he found framed in serapes and sombreros in Mexico. Like a latter-day Gauguin, he took a long trip to Tahiti.

O’Shea was 35 (1916) when he first settle in the Carmel Highlands as a very eligible bachelor. Six years later one of his trips took him to New York City. He came back to Carmel with a bride from Terra Haute, Indiana — Molly O’Shaughnessey. Her first husband had been ambassador to Belgium and Mexico but had been killed in an auto accident in Utah, where he was the principal owner of a silver mine.

John and Molly build a Highlands home where they entertained (and whose portraits John painted) writers Sinclair Lewis, Dorothy Thompson, Lincoln Steffens, and Ella Young, among others. Beach parties were remembered for coal-broiled steaks and potatoes roasted on embers. On those occasions John’s wit was almost irresistible. To people who bored him, however, he was aloof. Often he preferred the company of humble, honest people to those of station.

Typical of the humble was a young girl who fell in love with Sea Fantasy, a small painting described as a blend of Surrealism and abstraction. She couldn’t purchase it. She grew up, married, and began saving a dollar at a time from her household money. Ten years after falling in love with this painting she dared ask the curator of the Carmel Art Association if it were still available.

Knowing O’Shea, the curator rummaged around the storeroom. The painting had been saved for her. The happy woman dumped down 400 silver dollars and made off with her prize.

On the other hand, Sinclair Lewis, the first American writer to earn the Nobel Prize for Literature, begged for a painting. O’Shea didn’t want to sell. Months of bickering. O’Shea finally agreed.

As Lewis was giving his check he said, “Now, John, I guess you can buy a couple of beefsteaks.”

A flare of Irish temper. “If my painting means only butcher meat to you, you can’t have it!”

O’Shea tore up the check and chucked America’s foremost novelist into a tidal pool.