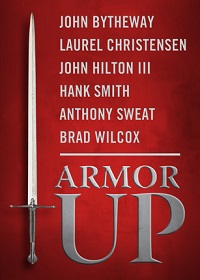 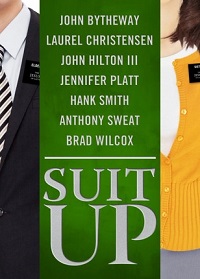 With the lowered missionary age, missionary work around the world is burgeoning. Predictions are that a record 80,000 will be in the field by the end of 2013. LDS authors and musicians are offering a few new titles intended to help youth prepare to serve.

Popular speakers on the Especially for Youth circuit have teamed up in two upbeat reads aimed at the same youthful audience. Armor Up and Suit Up both feature the essence of talks on vital topics that help young people resist the enticements of the world and cling to gospel teachings. Both small paperbacks are published by Deseret Book at $11.99 each.

Although Armor Up (106 pages) addresses basics such as faith, gospel foundation, and spirituality and includes Brad Wilcox’s frank discussion of chastity, Suit Up (131 pages) emphasizes — you guessed it — missionary preparation. Short, lively chapters are based on Section 4 of the Doctrine and Covenants.

Both titles offer “action” suggestions at the end of each chapter, along with QR codes and URL links that enable young readers to join in a discussion or watch a video clip. In short, they’re good reads for good kids and an excellent resource for future missionaries.

Richard J. Allen’s Missionary Companion is a pocket-sized “easy reference guide for missionaries and teachers,” but people preparing a lesson or talk will also find it useful. (Covenant 2012, 191 pages in soft cover, $9.99.)

Topics run alphabetically from Abrahamic Covenant to Zion, making it simple to access quickly the actual wording of scriptural passages.

Each topic heading is followed by brackets indicating the number of times the word or phrase is used in the Standard Works. An introductory paragraph is followed by scriptures, then interesting additional information, and often a quote from a modern-day prophet.

Although this volume is by design not comprehensive, it contains plenty. Pluses: its portability, rounded page corners, and price. Downside: the very tiny print (which usually is no problem for younger missionaries; add smiley face here). 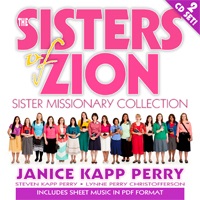 Janice Kapp Perry and her musical family and friends have teamed up for a 40-song, two-disc package of music and messages filled with missionary zeal. Sister Perry’s recent re-do of 1985’s “As Sisters in Zion” to 2013’s “The Sisters of Zion” is a hit at the Provo MTC, where fully half the new missionaries now are sisters who fill the large gym with bright color during each Sunday’s Relief Society. The moving words are apropos for the many young women who are choosing to serve missions.

Also appearing among Perry-produced/recorded songs is “To Bring the World His Truth,” another Janice Kapp Perry creation that is regularly sung at the MTC.

Although the new album is subtitled “A Sister Missionary Collection,” the 40 songs are appropriate for elders as well. Songs by son Steven Kapp Perry and daughter Lynne Perry Christofferson are mixed in with their mom’s.

New songs include “Preach My Gospel” and “For Such a Time as This” (words by David B Larsen). Of note are a different melody for “Oh, How Lovely was the Morning,” Roger Hoffman’s rendition of “The True Vine,” and Santita Jackson’s authentic vocal on “Like a River.”

Each disc contains a vocal songbook (music and words) in pdf format for its 20 songs, totaling 40 songs — a real bargain at $19.98 for the whole generous package of recorded songs and sheet music. It’s available through janicekappperry.com and LDS retailers. (The cover shots of sisters currently serving are delightful.)