One of the things we love about living in Virginia is the pattern of thunderstorms that roll through in the summer. Sometimes the air is so thick with humidity that the clouds and rain seem to form within a matter of minutes.

It is not unusual to awaken to a sunny blue sky, only to look out later and see it raining, and then to look out again and see the sun back, with little evidence that the rain was ever there. Even the puddles have evaporated off the sidewalks and streets, making the air muggy and miserable.

Sometimes the rain will settle in for the whole day, but other times it just comes with a flash (literally), and is then gone again. These quick storms can be violent, with heavy winds and rains that seem to come down in bucket-sized streams. If I didn’t know better, I might think that Fluffy was pulling a joke on me by sneaking upstairs and dumping water outside from our upstairs windows.

After one of these recent summer storms, Fluffy was taking a walk through the neighborhood when he saw something interesting. He was using a trail that he often travels, cutting through the woods near our home and coming out in another subdivision about a half mile away. But on this one day the scenery did not look the same as he remembered, and it was obvious that something had changed. Here is a picture that he took: 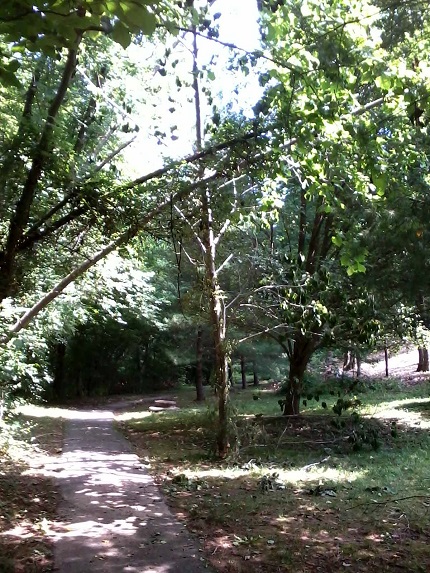 What is different is the tree that appears directly in the center of the picture, about five feet away from the edge of the paved trail. Fluffy didn’t remember seeing that tree before, and it was odd that such a large tree would be planted so close to the trail. Upon closer examination, he discovered that looks were deceiving, and the new foliage was not even a tree at all. 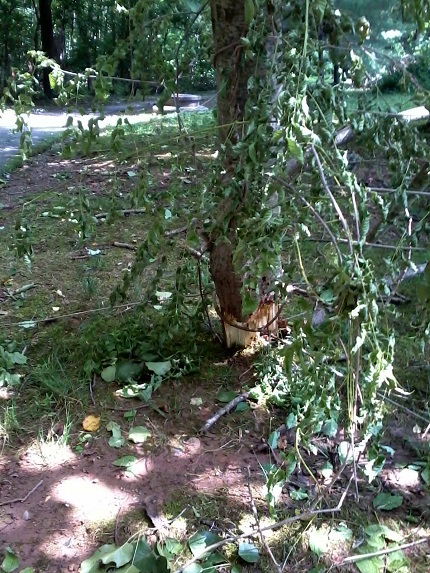 If you look at where the tree enters the ground, you will notice that there are no roots, but only evidence of missing bark and a broken limb. This branch must have been ripped from one of the trees during the previous night’s storm. Then it fell so that the broken limb was perpendicular to the ground, with the force of gravity driving the splintered end of the branch into the soil.

The weight of the limb combined with the support of nearby trees was enough to keep the broken limb sticking up in the air like a medium-sized tree. It was only on closer inspection that one could see this new tree was not a tree at all.

As Fluffy walked the same trail for the next few days, it soon became obvious that the new tree was an imposter. Without any roots to nourish them, the leaves on the branches soon withered and died. A couple of times he actually tried to push the imposter over, but the branch had been driven far enough into the ground that it was not easily toppled.

Finally, after a couple of weeks, the fake tree disappeared. Either a group of neighbors or the homeowners’ association had taken matters into their own hands before an accident happened and the fake tree fell over and injured a child or a pet.

I have thought about this several times since I saw these pictures, and have considered the distractions that sometimes appear suddenly in our lives. Sometimes we invite them in, and sometimes they just arrive unannounced. Sometimes they appear to have real value, and it’s only later that we discover the false promises of happiness that they bring.

We all have the same amount of time allocated to us each day. We can spend that time sleeping, working, reading, watching reality TV (!), playing computer games, or a doing a thousand other things. Hopefully, we can achieve the right balance between work and play, entertainment and enlightenment.

If we find that our distractions are keeping us from our destinations, then it might be wise to reorder our priorities and remove the fake trees from our lives. If we don’t get rid of them, they could topple over and cause a real problem. Just as bad, they could stick around and distract us from the things that are really important.