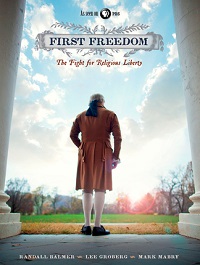 In case you’re planning to skip the fireworks this year, here’s a book perfect for celebrating freedom. It’s good for July reading or any time you want to deepen your understanding of and appreciation for the privilege of worshiping God as you please.

First Freedom, the Fight for Religious Liberty is a large-format companion book to the Lee Groberg-produced documentary film that premiered on PBS in December. Its pages are filled with color images shot for the film by Mark Mabry (Covenant Communications 2012, 98 pages in hardcover, $26.99).

But don’t be fooled by the appealing layout and outstanding photographic illustrations from actual historic locations such as Independence Hall, Jefferson’s Monticello, and Plymouth, Mass. There is real substance in the text as well.

Prize-winning historian Randall Balmer, whose credentials include Princeton Ph.D. graduate, Columbia University professor of American religion, and tenure as an Episcopal priest, has skillfully synthesized exhaustive research into a well-written, concise account of how religious freedom came to be the First Amendment.

He does not sacrifice detail in the telling. Observations and quotes on the topic from other scholars of various religious traditions appear as sidebars on the pages (unfortunately, in sometimes very small typeface).

The book follows the history of religion the United States from the time Roger Williams was banished for suggesting church and state should be separate (after the Puritans set up religion-by-law with the Rhode Island Charter in 1663) through the differing views and debates among the founding fathers, who ultimately decided that each person should decide his own religious practices rather than have them mandated by government.

Before the First Amendment, freedom of religion was unheard of. It was precedent-breaking for a nation to trust its future to the morality of its citizens rather than coerce conscience through state-sanctioned religion, as had been done and still is being done in other countries around the world.

First Freedom tells the complex story of how it happened and honors those who carved an idea and conviction into law.

Matthew S. Holland comments in “The Legacy of the Founders” (page 91), “The rich legacy that comes to us from the founders…is not contained in a single law. It is a rich combination of the original Constitution, the Bill of Rights, the spirit of the Revolution, and the Declaration of Independence. Those documents and events work together to teach us something about the dignity of human beings everywhere: that they are entitled to be free and to rule themselves.”

He concludes, “Our most important export has been the Constitution and what it has meant not just for American democracy, but for democracy all across the world.”

The source material is outlined in a selected bibliography and endnotes, along with the credentials of the scholars quoted. The pages are thick and slick, enabling years of perusing this excellent volume.