When some people hear the word “bowery,” they probably think of a certain section of lower Manhattan with a rather seedy past. In fact, if you do a quick search on the Internet, that is almost the only definition you will find.

If you dig a little deeper you will find that the words “bowery” and “bower” can also refer to a picturesque country cottage, a medieval lady’s bedroom in a castle, or, more relevant to our discussion here, a natural shady or leafy shelter in a wood or garden.

But if you have studied Mormon pioneer history you have probably heard the word used to refer to certain manmade structures where meetings and other activities were held in Salt Lake City and many other Mormon settlements in pioneer days. I thought a note how they were built and how extensively they were used might be of interest.

A bowery was often the first structure put up in a new community in order to have a temporary place for worship and other kinds of meetings, including school, until permanent facilities could be built. It was built by placing posts in the ground, laying timbers crosswise and then covering them with tree branches, or bows (hence the term “bowery”), and other kinds of foliage. In pioneer days, boweries were the center of community activities until replaced by a tabernacle, sometimes only after several years or even decades.

Incidentally, contrary to some popular ideas, there was not a bowery in Nauvoo. Joseph Smith often preached in a grove, which was sometimes referred to as a bowery for, as indicated above, the term simply referred to a shady place.

In 1846, the Saints erected a bowery in Council Bluffs, Iowa. It was there that the members of Mormon Battalion were mustered into the U. S. Army and also where a farewell dance was held just before they left on July 20 for Fort Leavenworth.

A year later, on July 29, 1847, members of the Mormon Battalion’s “sick detachment,” who had spent the winter in Pueblo, Colorado, arrived in the Salt Lake Valley (just four days after Brigham Young’s arrival). They were immediately assigned the task of erecting a bowery on the Temple Block, and they began work before the day was over.

It was finished on July 31, and the next day, a Sunday, church services were held there. It was a small structure, only 48 by 28 feet, covered with brush and bows. A small stage at one end served as a rostrum and also for the production of plays. The Temple Block bowery served members of the Church as a meeting place as well as a focal point for their social and religious life for the next two years.

One of the early festivities to be held in Salt Lake’s first bowery came on August 10, 1848. It was a day of thanksgiving, in celebration of the first summer’s harvest in the valley. At 9 a.m., everyone met at the bowery, a white flag was hoisted on the liberty pole put up for the occasion, accompanied by cannon fire and shouts of “Hosanna to God and the Lamb forever and ever, Amen.” Speeches were given and from noon to 2 p.m., a dinner was served. The rest of the day was given over to music, dancing, prayer, and preaching.

In the spring of 1849, the Temple Block bowery was replaced by a larger, more substantial one, which could accommodate 3,000 people. It measured 100 feet long and 60 feet wide, A hundred posts supported the roof, which consisted of boughs with dirt piled on top, making it more waterproof than the old bowery. But, like its predecessor, it was useable only in fair weather, for it was still open to the elements. It was used until the “Old Tabernacle” was finished in December 1851.

On July 24, 1849, the Saints in Salt Lake City celebrated the second anniversary of Brigham Young’s arrival in the Salt Lake Valley. It was a special occasion for which the second bowery was enlarged with a canopy that extended about 100 feet on either side in order to accommodate the huge crowd that would attend the meeting as well as a dinner.

It was a truly gala occasion — perhaps the most festive ever held in the bowery. It began at 7:30 a.m. with a flag-raising, firing of guns, bell ringing, and band playing. A large national flag, measuring sixty-five feet in length, was unfurled at the top of the 104-foot-high liberty pole and was saluted with the firing of six guns, the ringing of the Nauvoo bell, and spirit-stirring music from the band.

At 8 a.m. the Saints were called together by the firing of guns and music. Then began a grand procession from Brigham Young’s house to the bowery. It was led by Horace S. Eldredge, the marshal, in military uniform and on horseback.

Then came the brass band, twelve bishops carrying their ward banners, twenty-four young men dressed in white, each carrying copies of the Declaration of Independence and the U.S. Constitution. They each also carried a sheathed sword, and one of them carried a banner inscribed with the words, “The Zion of the Lord.” They were followed by twenty-four young women dressed in white, each carrying a Bible and Book of Mormon, and one bearing a banner.

Then came the Church leaders, other marchers and, finally, twenty-four uniformed men, called the “silver greys,” led by Patriarch Isaac Morley, each carrying a painted staff with a white ribbon on top. One carried a flag consisting of the stars and stripes and the inscription “Liberty and Truth.”

When the procession arrived at the bowery, the huge crowd assembled there greeted it with shouts of “Hosannah to God and the Lamb,” and as Brigham Young proceeded down the aisle he was met with cheers of “Hail to the Governor of Deseret.”

During the meeting a hymn was sung, the Declaration of Independence and the Constitution were presented, and Brigham Young led the congregation in shouts of, “May it Live Forever.” After the Declaration of Independence was read, the band played a rousing number, a poem composed by Elder Parley P. Pratt was read, and then Brigham Young led the multitude in shouting, three times, “Hosannah, Hosannah, Hosannah, to God and the Lamb, forever and ever, Amen,” while the twelve bishops waved their ward banners.

Then came more band music, followed by the reading of another poem, “Ode to Liberty,” and then the same Ode was sung by the twenty-four silver greys. This was followed by a speech by Brigham Young, and after that several thousand people enjoyed a sumptuous feast. Some had been in the valley for two years, others had only recently arrived, and one group that arrived in town during the celebration were amazed when they were invited to share in the meal. There were also several Indians in attendance.

After the meal another meeting was held at which there were many toasts as well as expressions of patriotism.

The bowery was also Utah’s first theater. According to Edward Tullidge, an early Utah historian, most British Saints in the valley were from areas where, for generations, people had enjoyed the theater and concerts. As he said, “Such a community could not possibly have got along without their theatre, nor been content with their isolation without something to awaken pleasurable reminiscences of the intellectual culture and dramatic art of their native land.”

As a result, they form a group known as the “Musical and Dance Company,” and Brigham Young turned the bowery over to them for their productions, beginning in 1851. The first play to be produced was “Robert Macaire” (a play about a French charlatan). Several other “creditably performed” plays were produced during the 1851-52 season, each witnessed by over a thousand people. With the opening of the Social Hall in 1852, the theatrical productions were transferred there.

As might be expected, the Old Tabernacle soon became too small for the increasing sizes of congregations, especially general conferences, as more Saints flocked into Salt Lake City. In July, 1854, therefore, it was decided to erect another bowery just north of the tabernacle to accommodate conference overflow.

On August 15, the First Presidency issued a request to the bishops in the city and surrounding areas to provide lumber and other material, hoping that the new bowery would be finished in time for the forthcoming October conference. Anyone who helped out was promised credit on his labor tithing.

The bishops responded well and this third bowery was completed on time. The largest bowery yet built in Salt Lake City, it measured 156 x 138 feet. It did not replace the tabernacle, but was used as needed. 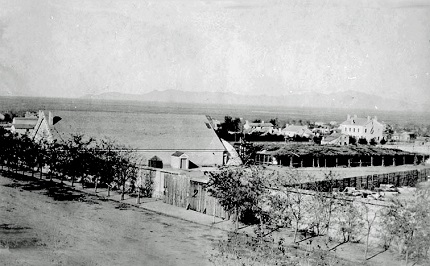 The Old Tabernacle and the Third Bowery.

Something of how the Saints felt about this bowery is revealed in a statement made by Elder George A. Smith during a meeting on August 12, 1855: “We on the present occasion have the pleasure of sitting out of doors and of listening to the counsel and instruction of the servants of God without being crowded, from the fact that we have father’s big kitchen to meet in, and in this capacious Bowery we can enjoy a great deal of comfort instead of being jammed into our large Tabernacle, those of us who could get in, and the balance being obliged to go home.”

Several General Conferences were held in the boweries. One was on April, 1850. In preparation for that event the bowery had to be repaired in order to more effectively keep out adverse weather. But when it was ready Brigham Young said, in his eternally optimistic style, “This is the most comfortable place that I have ever seen, for the Saints to hold their meetings in at our gathering place. When I have been abroad in the world, we have had splendid halls, but at the gathering place this is the best.”

Such a statement is a wonderful representation of what the boweries meant to the Latter-day Saints as they struggled to establish their home in the American West.