One would think that after blessing me with fungal pneumonia, a coma, sepsis, renal failure, pulmonary failure, paralysis, and a host of other goodies, all since last December, God would move on to somebody else. But no, that isn’t the way God works. He has more of a sense of humor than that.

When I was in the process of getting MRSA, Fluffy and I noticed a mottled red discoloration on the little toe of my right foot. One of my doctors used a purple pen to draw a line around the outer periphery of the redness so we’d know if the redness was spreading. But no, the redness did not stay inside the purple line. In fact, the redness took one look at the purple line and said, “Ha!”

The redness crept toward the adjacent toe, and then the toe after that. Then, when nobody yelled at it, it took over the entire foot.

Fluffy and I were a little concerned, but when we went to the infectious diseases specialist and then the podiatrist to make sure my MRSA was gone, neither of them said boo about the red foot. I thought this was a tad suspicious. My foot looked as though it was about to take over Cincinnati. It was going to be a hostile takeover, too.

Perhaps my doctors didn’t care about Cincinnati, but I did. I thought somebody should be calling out the National Guard. The military should be deployed. Heavy weaponry should be armed and aimed at my foot, just in case it did something naughty. But because nobody in authority challenged it and put it in its place, it acted bad. Very bad.

Fluffy and I were close to going to the emergency room before he finally googled a slide show on common skin disorders and learned first-hand about psoriasis. We knew psoriasis existed, of course. What we didn’t know was that an old person could get it for the first time.

Hold on. I’m 63. There’s something rotten in Northern Virginia, and that rottenness is Kathryn H. Kidd. Bummer.

I should also be writhing in pain. The websites say psoriasis can be accompanied by “intense itching or intense burning.” I don’t need the websites to tell me that. All I need is to look at my foot. 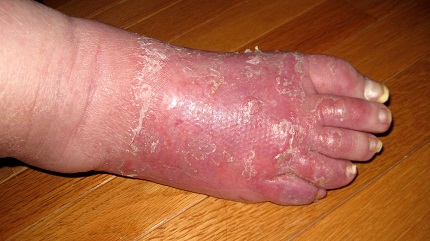 This isn’t an example from the internet. This is my foot. Have you ever seen anything more painful-looking?

I ask you. Should that foot be in pain, or what?

I am not writhing in pain. I am not itching to death. In fact, if I didn’t look down, I wouldn’t know there was a single thing wrong with that foot. Through God’s own tender mercies, or maybe His sense of humor, He gave me the world’s worst case of psoriasis on a foot that is paralyzed — a foot you could hit with a sledgehammer, and that I wouldn’t feel a thing. You could give me psoriasis on that foot till my toes dropped off, and I wouldn’t feel even a moment’s twinge of discomfort. There is no pain whatsoever.

This is one of about a million things I love about God. He always gives me something to laugh about. I can’t wait to see Him again, when we can sit down with a bag of popcorn and laugh about all the crazy things He did to make my life so exciting and so fun.