Recently, the fifth of the month has had a little bit more significance than it usually has in the Kidd household. It was December 5 when I first was incarcerated in the hospital. It was March 5 when I was paroled. And sandwiched right in the middle of those two auspicious dates was February 5 — the day when Fluffy was laid off from work.

We were not planning on Fluffy losing his job. In fact, Fluffy loved his place of employment. It was in California, which is the perfect location for a person who lives in Virginia. Fluffy worked at this place for a little more than a year without ever meeting a single other employee face to face.

Because he worked from home, Fluffy got up when he wanted to and worked when he wanted to. This is not to say he did not work at all. Fluffy has always been one of those people who can get more work done in fifteen minutes than other employees can get between start time and lunch. So he would work and work, and then we would watch a little TV or play “Ticket to Ride.” Life was good in the Kidd household when Fluffy had a job.

The way we planned it was that Fluffy would work at this same place until he was 65 or so, and then he would see if he could get some contracting work from the same company and get a little extra paycheck even after he was retired. That sounded good to both of us.

What we didn’t count on was that in the interest of corporate profits, the company would get a new CEO who would fire a goodly amount of the employees. Employees who had only worked for the company for a year and who lived all the way across the continent from everyone else were naturally the first ones to go, and Fluffy showed up at my hospital room on February 5 without a job to call his own.

People our age define themselves by their jobs. “I’m a writer,” I may say. It doesn’t matter that I do precious little writing and get paid very little. When I do work, writing is what I do and being a writer is what I am.

Recently I have heard Fluffy describe himself as being semi-retired. He does this the way a man might approach a crazy shirt he secretly likes, but that other people may laugh at if he puts it on. When he did it, he looked at me out of the corner of his eye, as though he were trying to see what I thought of the crazy shirt.

I’ve always liked crazy shirts. When Fluffy described himself as “semi-retired,” I told him, “You might as well go all the way and just be retired. That sounds more fun than semi-retirement.”

So today, Fluffy is retired. A job may come out of nowhere that he still may take, once I don’t need him to babysit me the way I need him now. But unless that happens, Fluffy is out of the workforce, which is fine with me.

This does not mean Fluffy is not working. Recently when he whistles at me, it is likely to be from the portico behind me. Fluffy has been using a ladder to get to the top of the portico, where he has been replacing a piece of rotted wood at an impossible height. 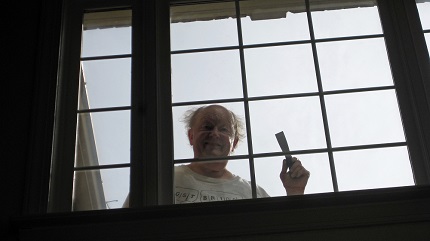 This window is a lot higher up than the close-up indicates.

Yesterday I looked out one of the windows next to the portico, and there was a ladder on top of the portico. Fluffy had taken a ladder up there and was getting leaves out of the gutter on our roof. I’m glad I didn’t know about it until he was already finished doing the dangerous stuff.

Job 14:1 says, “Man that is born of a woman is of few days and full of trouble.” I don’t know if “trouble” describes Fluffy, but he is always doing something. He may or may not have retired from a paying job, but Fluffy will never retire from life.

This is something to be admired and emulated. I want to be just like Fluffy when I grow up.