An LDS acquaintance of mine has recently discovered science, it seems, and no longer accepts the scriptural account of Creation. Among his prolific online writings, I was disappointed to read a sarcastic dismissal of Earth and its wondrous balance of elements and materials as the fruit of divine Intervention. Instead, he said, the elements of the earth were merely the products of matter from stars. No divine tinkering needed.

Having recently discovered science, I am sure he feels that his viewpoint is highly scientific and intelligent. Sadly, it’s novice science at best.

I am not saying that science forces us to recognize God. God will not take away the need for us to approach Him with faith. Yet, while there is plenty of room for atheism among thoughtful scientists, I feel that science properly understood should lead us to wonder and marvel at the nature of this planet and the stuff we are made of.

Yes, we are in part the stuff of stars. Our tangible stuff, flesh and bone, nails and hair, blood and sweat, is made of a handful of elements. Science tells us that the hydrogen present in water, proteins, sugars, and nearly every compound throughout our bodies, was created in the first few moments of the Big Bang. The rest of the elements that make up this earth were largely formed much later in the core of stars, where powerful processes gradually convert hydrogen into helium.

It is from a stellar genealogy that we inherit the elements we depend on for life and for the majesty of planet Earth, with its rich crust, mineral-laden waters, life-giving atmosphere, and its magnetic core. That core, by the way, is another of the life-preserving wonders we have inherited from the stuff of stars.

(Ironically, while that mass of metal is located as deeply as possible beneath our feet, its magnetic field shields us far above our heads from the solar wind, deflecting charged particles that would strip away the upper atmosphere and leave us more vulnerable to harmful radiation. A clever design/coincidence indeed.)

Our physical bodies and the earth itself come from elements that were forged in cycles of the birth and death of stars, one of the great engines of Creation. So yes, you can say that we owe our physical existence to stars. But I would suggest a little more thinking and a little more curiosity are needed to understand what that actually means, and to appreciate why our gratitude and wonder should not stop there.

The stellar process that gives rise to carbon is called the triple-alpha process. It’s beautiful and improbable, so much so that I would call it brilliant, if not miraculous. There are two steps in this process where an interesting coincidence is found.

In the first step, two alpha particles (the nucleus of helium-4) combine to form beryllium-8, and in the second step, beryllium-8 combines with another alpha particle to form carbon-12. The coincidence is that the energy levels of these particles seem perfectly tuned to allow this reaction to occur in abundance, when otherwise it would be rare. Wikipedia’s article on the triple-alpha process explains:

Ordinarily, the probability of the triple alpha process would be extremely small. However, the beryllium-8 ground state has almost exactly the energy of two alpha particles. In the second step, 8Be + 4He has almost exactly the energy of an excited state of 12C. These resonances greatly increase the probability that an incoming alpha particle will combine with beryllium-8 to form carbon.

The existence of this resonance was predicted by Fred Hoyle before its actual observation, based on the physical necessity for it to exist, in order for carbon to be formed in stars. In turn, prediction and then discovery of this energy resonance and process gave very significant support to Hoyle's hypothesis of stellar nucleosynthesis, which posited that all chemical elements had originally been formed from hydrogen, the true primordial substance.

As a side effect of the process, some carbon nuclei can fuse with additional helium to produce a stable isotope of oxygen and release energy….

This creates a situation in which stellar nucleosynthesis produces large amounts of carbon and oxygen but only a small fraction of these elements is converted into neon and heavier elements. Both oxygen and carbon make up the 'ash' of helium-4 burning. The anthropic principle has been controversially cited to explain the fact that nuclear resonances are sensitively arranged to create large amounts of carbon and oxygen in the Universe. 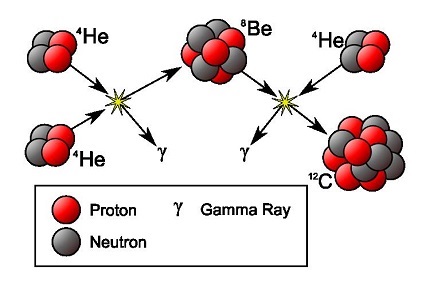 Schematic of the triple-alpha process from Wikipedia, http://en.wikipedia.org/wiki/Triple-alpha_process.

Wikipedia’s article on Fred Hoyle, the leading British astronomer who first realized that stars were the engines for creating the elements, discusses how this atheist realized that chance alone seemed inadequate to describe the universe we lived in.

In trying to work out the routes of stellar nucleosynthesis, he observed that one particular nuclear reaction, the triple-alpha process, which generates carbon, would require the carbon nucleus to have a very specific resonance energy for it to work. The large amount of carbon in the universe, which makes it possible for carbon-based life-forms of any kind to exist, demonstrated that this nuclear reaction must work.

Based on this notion, he made a prediction of the energy levels in the carbon nucleus that was later borne out by experiment.

Would you not say to yourself, "Some super-calculating intellect must have designed the properties of the carbon atom, otherwise the chance of my finding such an atom through the blind forces of nature would be utterly minuscule. A common sense interpretation of the facts suggests that a superintellect has monkeyed with physics, as well as with chemistry and biology, and that there are no blind forces worth speaking about in nature. The numbers one calculates from the facts seem to me so overwhelming as to put this conclusion almost beyond question." —Fred Hoyle

It is not just the supremely tweaked energy levels of certain particles in the triple-alpha process that commands our wonder at the improbability of carbon-based life. For one of many other factors, the very existence of stars themselves should make us profoundly suspicious of chance alone as an explanation for the universe.

The fission and fusion occurring within the core of a star are processes releasing such massive amounts of energy, like billions of atomic bombs erupting simultaneously (100 billion hydrogen bombs per second is an estimate on one physics website). This massive release of energy would cause a star to explode violently outward if it were not for the massive gravitational forces holding it together, forces that could cause the star to collapse into a black hole or dead neutron star where it not balanced by the energy release.

Gravity is needed to pull matter together so intensely that fusion starts and the star comes to life in the first place, yet it’s a remarkably delicate balance between the strength of gravity and the strength of electromagnetic and other forces that are required for a star to exist at all.

Physicists have marveled at the delicate balance of fundamental properties that is required for stars to operate and make life possible.

The properties of matter and energy that make life possible arise from a handful of fundamental constants, like the strength of gravity and the strength of the weak and strong nuclear forces, that influence numerous aspects of the cosmos. The properties that allow stars to exist and carbon to be formed are also linked to the ability of DNA to function, of proteins to operate, and of liquid water to transport nutrients in cells while also giving vapor and ice to govern the climate of the planet.

When I contemplate the challenge of fine-tuning fundamental properties of matter to allow stars and planets to form, to allow clouds and rivers, ears and eyes, chlorophyll and sugar, bacteria and great whales, and brains that can create and appreciate music, I am overwhelmed with wonder and surprise that it was even possible, no matter how intelligent a Being was who wished to create.

I am dumbfounded that a solution, such a brilliant optimum in the balance of forces could be found among the countless possibilities, almost all of which would lead to lifeless universes populated with scattered, lonely wisps of sterile particles or little but raging black holes or other dreary possibilities devoid of the brilliant and diverse engines of creation we see in the stars that fill our skies and gives us the stuff from which we are so delicately crafted.

We are the stuff of stars, but don’t stop there. Stars are the handiwork of a brilliant and loving God, or the result of unbelievably fortunate accidents. This is where a touch of faith comes in. Knowing through many personal experiences that a loving God exists, I lean toward stars as yet another brilliant product of His work rather than a crazy byproduct of randomness.