My life has had its share of small moments that seemed inconsequential at first but escalated into major happenings.

I was on my first two-month around-the-country tour of American museums with the French artist/collector Nat Leeb and his wife Paule. Early in the trip we stopped in Minneapolis, where I had arranged a one-man exhibition of his paintings.

Leaving San Francisco, we added my mother to our trip back to Washington, DC across the southern states. When we reached Dallas, Nat phoned Algur Meadows, a very rich Texan who had purchased art from Leeb in Paris. Quickly our group of four found ourselves lunching with Meadows in his exclusive oilmen's club atop a Dallas skyscraper.

Meadows invited us to his beautiful Turtle Creek home for lunch the following Sunday. The walls of the large dining room were lined with a breath-taking array of beautiful watercolors by Raoul Dufy (1877-1953). Meadows was particularly proud of his acumen in acquiring the paintings from two young French art dealers.

"They'd breeze into town to sell me something from the stash of art they were carrying. I'd put them off for weeks at a time, letting them run up big bills at the Marriott. When I figured they were about to run out of money, I'd make them an offer for a lot less than what they were asking."

They were back in town trying to make another sale, and Meadows insisted that we meet them after lunch before we left for New Orleans. Thus we met Fernand Legros, a French Egyptian, and Réal Lessard, a French Canadian, for the first time.

Back in Paris, Legros needed some legal assistance, and he called this newly met French artist for suggestions. Nat said, "Why don't you talk to my own lawyer, Yves Famchon." It was a suggestion we both would regret.

Some months later Meadows entertained a group of New York art dealers. They brusquely opined that 46 of Meadows's 58 paintings, including all the Dufys, were fakes. To put it mildly, Algur was distressed. Word got out and became a big-time story in the American and European press.

Because I had met Legros, I proposed writing a story on art fakes for the Saturday Evening Post. The editors replied, why didn't I do a book on the subject, and then they might do an excerpt.

For the next year and a half - maybe more - I closeted myself every day in the Library of Congress, where I was give a reserve shelf and a coveted stack permit. When not there I was busy doing phone and personal interviews with dealers, experts, museum directors, the New York District Attorney, and the scientific investigators for the National Gallery.

By this time allegations were surfacing that the author of the fakes Legros was peddling was a Hungarian, Elmyr de Hory.

The French government gave me a fellowship, and I flew to Paris, where I interviewed Famchon in Leeb's home. When I asked him the crucial question about the authorship of the Meadows paintings, he turned off my tape recorder and made an off-the-record reply, "Probably the Hungarian."

By the time my book, The Fabulous Frauds, Fascinating Tales of Great Art Forgeries, was published in 1970, the Saturday Evening Post was defunct. 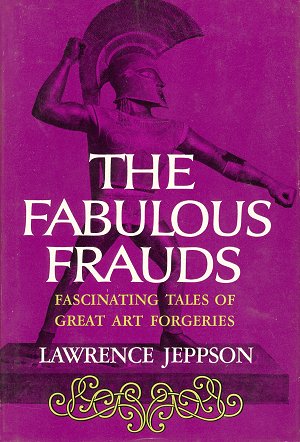 Many collectors and museums will hide the facts if they have been deceived by a piece of fake art. Through the brouhaha, Meadows had reacted quiet differently. He had faced the challenge, and the assault on his naivety, by a determination to get to the truth of the matter, and eventually he send 27 of his questioned French paintings to Paris to be analyzed by a panel of the best minds in the business. I admired him for his pluck and dedicated my book to him.

My book was out. It received many favorable reviews, although The New York Times refused to review it, probably because I had referred to its art editor in relation to a group of fakes that he had extolled. The head curator of the National Museum, Lester Cook, and the art guru for The San Francisco Chronicle, Alfred Frankenstein, confided to me that they used it as source material for their lectures. The Book of the Month Club backed off from selecting it because of legal fears. Arlington Book in London published it without the dangerous chapter. Excerpts were printed in Holland. As an expression of appreciation, I sent an autographed copy to Famchon. That was a big mistake. Evidently, he passed his copy on to Legros, who retained lawyers in New York City.

More than a year after the first copies of my book were sold, Legros sued me for $5.5 million. (He was suing Clifford Irving, author of the book Fake, for $55 million.) The suit should have been thrown out because it was not filed before the one-year statute of limitations. The publisher's Wall Street lawyers were unwilling to press this matter- who as going to pay them?

I lost the next year or two of my life trying to build a defense. Back in Paris I interviewed people on l'Express, a magazine similar to Time. In the French court they had lost a similar suit to Legros.

By the standard contract I had with my publisher, Weybright and Talley, I was responsible for paying legal fees and damages. These were approaching $25,000, a very lot of money forty years ago. I had no way of paying that - or the escalation of continued litigation. My publisher was absorbed in a merger, and everyone was headed for cover. The new, unsympathetic publisher, McKay, began bad-mouthing my book.

I had a very good friend and pro-bono lawyer. He told Legros's lawyers I was small fry and they should concentrate on their larger suit against Irving. He told the publisher I would agree that no more copies of the book would be sold if the publisher paid the accumulated legal fees. The deal was struck. I was supposed to pay Legros one dollar, but I never did.

In the meantime, Legros was pressed by his own legal expenses, and he tried to blackmail Leeb by declaring that Leeb was the source of a fake painting Legros had sold to Meadows long before that fateful first meeting at Turtle Creek. This was an allegation I could refute.

In the French judicial system, an examining magistrate (juge d'instruction) investigates every aspect of a case before trial. He then presents his evidence to both the prosecutors and defense attorneys, who work from these findings. I agreed to fly to Paris to testify to the examining magistrate handling the Legros affairs, particularly to answer Leeb's alleged involvement. This led to the dismissal of this Legros effrontery.

Algur Meadows's paintings had been turned over to French experts. They had written individual dossiers on each of the paintings, and these were neatly stacked on the magistrate's desk. He tapped the top of the pile and said to me, "All fakes."

This particular stack was intended for Legros's lawyer. The magistrate allowed me to sit in the room, un-introduced, when the lawyer was summoned. I was permitted to overhear the magistrate scold the lawyer and his client in no uncertain terms. There was no doubt the magistrate was going to recommend Legros's prosecution.

When the magistrate learned that Legros had sued me for $5.5 million and blocked my book, he was incensed. He opened the doors to a tall side cabinet and showed me shelves of files on Legros, whose illegal activities went far beyond selling art fakes.

"You come back and see me after the trial, and I'll give you the whole story."

As I left the magistrate's office after more than two hours, I caught a glimpse of Legros, who had become really weird. He was wearing an ankle length duster like an American cowboy and a black, Abraham Lincoln like stove-pipe hat. I made it a point not to encounter him.

After a protracted trial, Legros was found guilty of selling fake art and was sentenced to a term in prison. He died soon after.

More recently, I asked my own New York City lawyer, another good friend, if I could again write about Fernand Legros, since he had been found guilty and was dead and had no family. My friend told me I could. And so I have just done so - in a somewhat shortened manner.