Michelangelo Buonarroti was born in Caprese (1475), where his father briefly was the podesta or chief magistrate. The family possessed only modest means. The father, Ludovico, was an undynamic soul whose self-assigned task was to hold on to a small inherited farmstead at Settignano about three miles northeast of Florence. His service in Caprese lasted only a year.

If Ludovico lacked personal ambition, he demanded more of his son. He was not pleased with the boy’s predilection for art, for the boy was often found in the churches sketching the paintings hanging on every side. Michelangelo had not only to contest with his father but his father’s brother as well. But he wore them down, and at 13, on the advice of Francesco Granacci, the boy’s 19-year-old friend, they apprenticed him to the workshop of Domenico and David Ghirlandajo, who were working on a fresco for the choir of S. Maria Nouvella.

This was as good a choice as could be made at the time, for Domenico was the best artist in Florence and was without peer in his portrayals of everyday Florentine life. He was called Ghirlandajo because he was the first to deck the heads of children he painted with garlands. He was, too, the first artist to reject the false taste of putting gold and silver ornaments into pictures and demonstrated how these colors might be imitated in oils with a more harmonious effect. Domenico had his hand in all public works of the time, and Pope Sixtus IV called him to Rome to work on the Sistine Chapel.

This Domenico-Michelangelo relationship was not a happy one. The contract called for the boy to be paid eight florins his first year, 10 his second, and 12 thereafter. In truth, Michelangelo could learn little from the brothers – he was actually self-taught through the copying of masters.

Domenico was jealous of the boy’s drawing superiority. The boy is said to have corrected one of the master’s drawings, using a few bold strokes to improve the presentation of a female figure.

Michelangelo could have learned from his master, but he refused to, for he was apprenticed to painters when he wanted to be a sculptor. At least he should have learned the technical secrets of plaster preparation for frescoes from the Ghirlandajos, but he failed even this, and it would haunt him later. Still, his genius lay in both fields, and he brought off successful counterfeiting in both.

Condivi, his pupil in later years, tells how Michelangelo borrowed a particular painting to copy, this being part of the method by which painters leaned to paint. When he had completed his replica, he smoked it. Michelangelo showed both pieces to all those present in Domenico’s studio, but no one could detect the replica. There was no evident difference between the original and the counterfeit. To further prove his skill, Michelangelo kept the original and returned the copy. The owner never detected the switch and never knew of it until the artist confessed and traded back.

The painting fake foreshadowed the sculpture fakery that plunged Michelangelo into peril.

Five years before Michelangelo was born, a bloody conspiracy to assassinate Lorenzo Medici and his brother and seize control of Florence was touched off on Easter Sunday when a 17-year-old Cardinal, Raffaelle Rosario, visiting from Rome, raised the chalice while celebrating mass in the cathedral. It was a pre-arranged signal, and the cardinal’s extended family was at the heart of it. The cardinal knew what was going to happen. He was part of the Pazzi Conspiracy. A gang of killers dressed as priests immediately attacked Lorenzo and his brother Giuliano, who were co-rulers of Florence. Lorenzo managed to escape, though wounded, but his brother was killed. 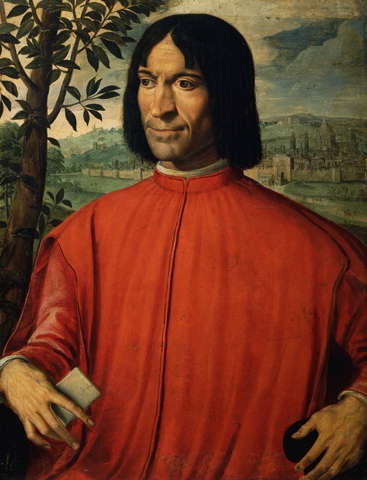 The attempted coup became a complete disaster. Eighty conspirators were sentenced to death, including the Archbishop of Pisa and Pazzi family members. The leaders were hurled out the windows of the Vecchio palace with ropes attached to their necks. In their last moments they quarreled vehemently among themselves.

Rosario returned to Rome and became an ominous force to be reckoned with.

When Lorenzo married, the great “conservative” wedding feast for 200 guests was limited to 50 courses, consuming many of the 150 calves and 4000 capons and pullets given by wedding guests. Unlike Lorenzo, his wife Clarice was narrow, bigoted, and a foreigner. Nevertheless, she honored him with nine pregnancies, ten births, and seven living children. When she died of tuberculosis, he turned her quarters, the Casino Mediceo, into a memorial school and gardens for artists.

There hadn’t been any great sculptors in Italy since Donatello. Lorenzo hired Bertoldo, Donatello’s assistant, to run a school for sculptors. Bertoldo went scrounging for pupils and managed to pry Michelangelo and Granacci from the grasp of Ghirlandajo.

Little did the boy know that this relationship would lead him into art forgery and a dangerous adventure with the increasingly powerful Medici enemy, Raffaelle Riario. Uncle Girolomo Riario had just been assassinated, and Raffaelle was trying to implicate Lorenzo.

In his new surroundings, Michelangelo thrived. Financially, Banker Lorenzo was over extended, some of its branches were failing, and the school and garden were a big drain, but they brought him solace.

One day he encountered Michelangelo polishing the marble mask of an old faun, that minor Roman deity having head and body of a man and the horns, pointed ears, tail, and hind legs of a goat. Lorenzo inspected it closely. He praised the form and finish but said, “the faun is an old man. Don’t you know age brings the loss of many things?” As soon as his patron left, Michelangelo corrected his mistakes with a few hammer blows.

Lorenzo’s power was eroding. The mad monk reformist Savonarola condemned humanism, the Renaissance achievements which Lorenzo magnified. His influence swept Florence; yet when Lorenzo died, Savonarola was at his bedside to give him a blessing.

Lorenzo’s heir was his first son, Piero, as inept a successor as could be imagined. The only sculpture Piero ever asked Michelangelo to do was a snowman. The court magician saw the ghost of Lorenzo in a dream. The specter warned that Michelangelo must get out of Dodge.

During his brief absence, many of the beauties Michelangelo loved in Florence were destroyed.

Back home, Michelangelo found a lovely virgin block of Carrara marble and from it brought forth a cupid, a sensuous cupid, the most dangerous of all the pagan gods. Discovery of this classically executed piece by the always-near, always-audible Savonarola partisans could have put the sculptor on the stake. No one in Florence dared buy it.

Michelangelo was told, perhaps by Piero, “Sell it in Rome. To get the best possible price, pan it off as an antique.”

Cupid was taken to a vineyard and buried in sour earth to rapid-age it. One can imagine it being smuggled out of the studio at night in a horsecart with well-oiled wheels. Intermediaries spirited the aged statue to Rome to offer it to none other than Cardinal Raffaelle Riario, whose rapacious acquisitiveness had become legendary.

The magnificently browned Cupid was of such classical sensuousness that it benefitted the cleric’s taste. And he bought it.

But Michelangelo was not out of the woods. The Cardinal had ears everywhere, particularly in Florence. He began hearing vague innuendos about his Cupid, and he sent a trained spy to Florence to dig out the truth. Stonecutters were not a major guild, and there were few sculptors. The trail soon led to the young man who had been a favorite of the hated Lorenzo.

Up until this time Michelangelo had led what seemed to be a charmed life. Now he was caught red handed by one of the most powerful men in Italy.

The contrite forger was summoned to Rome. He was told, “You are forgiven. I will have you work for me.”

But that wasn’t true. The story of the fake Cupid got around. Michelangelo had made the Cardinal a fool as well as a knave, and Michelangelo was forced to seek other commissions. A Cardinal from France stationed in Rome was above the political fray, and he commissioned an alter piece, the celebrated La Pieta, one of Michelangelo’s greatest.

It is ironic that if the artist had not stooped to fakery and been summoned to Rome, La Pieta might never have been created. 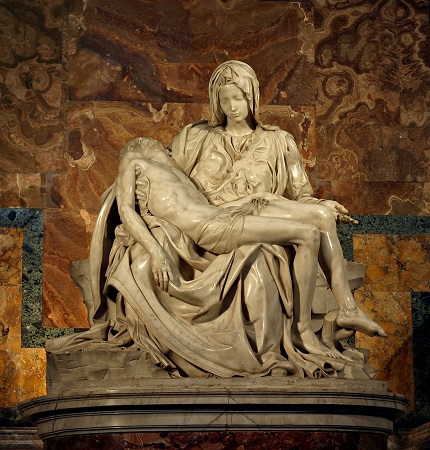