One of Steve McQueen’s most riveting performances was in the 1973 movie Papillon about a convict’s attempts to escape from Devil’s Island. The movie was based upon a 1969 enhanced autobiography which became a raging French best seller.

I remember that on the Paris Metro everyone seemed to be reading this story by Henri Chaumière, a convicted murderer, about the terror of his 14-year imprisonment and attempts to escape. Most of the 80,000 prisoners sent there during the penal colony’s century of use never returned to France. During World War II, when French Guyana and the islands making up the prison system allied themselves with Vichy, France, the penalty for attempted escape was execution.

In the film Chaumière is befriended by a forger, played by Dustin Hoffman. No doubt France bundled off scores of forgers to this penal complex, which included three islands and parts of French Guyana. Only one of them interests me, Francis Lagrange, who used the name Flag when he recounted the misadventures that sent him to Devil’s Island and his attempts to escape.

Flag was the only child of an itinerant engraver and picture restorer who described himself as “one of the best in Europe.” Flag worked with his father and learned all the techniques and tricks for making old pictures look new. He had dreams of becoming a legitimate artist.

The boy was what the French call a “hot rabbit,” a lust which got him into trouble and caused his father, in 1913, to bundle him off to work in Hamburg. Soon Flag, 21, was deeply in love with Maria, 19, the daughter of a wealthy German family, who were opposed to him. Warned by friends to leave Germany, he crossed the frontier just before World War I broke out.

Flag quickly enlisted in the French army. The way to win back Maria was to stomp on the Germans and end the war quickly. Oh yeah! Because he spoke, German, Flag was put in the intelligence service. When the war ended the frontiers remained closed. Flag persuaded the French to send him back to Germany as a spy. He was to report three times a year. Maria was still unencumbered. Despite being followed by detectives, threatened, and cursed, Flag married Maria. They had twin girls, and he was able to display his art, although with little success.

After his second exhibition Flag met a man who professed to be his contact from French Intelligence but turned out to be a double agent employed by his in-laws. Three days later Flag was arrested and threatened with a firing squad. After two weeks of intensive interrogations the sham spy was escorted to the French frontier and expelled.

The Swiss announced an international competition for the design of a postage stamp commemorating the 100th anniversary of Beethoven’s death. Flag won second place and a prize of about $100, which he and Paulette blew in a single night.

A week later Flag was visited by Joel, a smooth-talking, round-faced man with a Chaplinesque moustache. Flag reported the conversation:

“Do you wish to remain poor?”

“Can you actually execute the kind of engraving you so skillfully designed?. . .You are an engraver. . . and you have no aversion to money? Lots and lots of money?”

“The more money, the more frivolous the aversion.”

Flag went to work counterfeiting very old and very rare postage stamps. Soon he branched out to Etruscan coins, broken statuettes, ancient furniture and paintings. Trading on his father’s name, he was often called upon to authenticate his own forgeries.

He admired Van Gogh so much that, carried away, he once signed his own name to one of his fakes. Joel caught the gaff before it was too late.

When Paulette saw Flag was enjoying painting fakes, she exploded. So Flag set up a second, secret studio, where he could paint his fakes without Paulette knowing. Soon Flag found another mistress, Marilyn, “the most beautiful girl I’d ever seen,” and moved her into the secret studio. She was a wanna-be chorus girl with no talent, unemployed until Flag found her a job standing absolutely still and absolutely naked in a Folies Bergère chorus line. Marilyn was also an insatiable spender. Flag found himself quickly and deeply in debt. Things got worse when Paulette discovered the second studio and Marilyn. Goodbye, Paulette.

Flag was approached by Delanoit, “the most feared person in the Paris underworld.” He wanted Flag to engrave plates to counterfeit foreign currencies, a crime to which French police seemed indifferent. Within a month Flagg had made a million francs, although half that went to pay the Marilyn debts.

Six months later Flagg was summoned to Delanoit’s house, which he found swarming with gunmen. He was introduced to an Amsterdam dealer who had promised to deliver a genuine painting by Fra Filippo Lippi, one of the rarest painters of the Renaissance, to a California client. “Creating an original would be extremely risky. The client can’t be fooled by a forgery.”

In the Cathedral of Notre Dame in Reims, northern France, there was a Lippi triptych with a Madonna in the center and an Annunciation and Nativity on the sides. It hung in a secluded alcove in a small museum–the old Abbey of St. Denis–attached to the cathedral.

“Can you paint a duplicate?” Delanoit asked Flag.

Flag moved to Reims, took a room in the best hotel and, under another name, rented a well-lighted attic room in another part of the city. Every day at a different time he would stroll past the Lippi and make sketches. Using tricks taught by his father he slowly painted a replica of the triptych. Two months later the fake was ready for inspection by the Amsterdam dealer.

“My client is ready to pay five million francs.”

“For the original. You are about to be hung in the Cathedral of Reims.”

Delanoit’s experts in breaking and entering took over. They substituted Flag’s painting for the original.

Flag received 800,000 francs, but Marilyn went through that very fast. Flag turned to Delanoit, complaining the only way he could see out of his mess was to counterfeit French francs!

French currency is printed with a warning: counterfeiting of these bills is punishable by a life sentence of hard labor.

Flag’s Lippi fakery might have gone unnoticed, except for the Crash of 1929. The California collector was wiped out, and he put the painting up for auction in London. By chance the director of the Musée in Reims stumbled upon the illustrated sale catalog. He quickly took a boat to England to denounce the forgery–only to be confronted by a pack of experts who insisted the painting was genuine.

He hurried home, inspected the Reims painting under better light, and summoned the police. Overnight, the investigation embroiled law-enforcement people from France, England, Holland, and Germany. Soon a warrant was issued for Flag’s arrest.

But Flag was already under arrest in Paris charged with counterfeiting French currency. He had encountered Paulette, sunk to the lowest depths of prostitution, and to save her had proposed a menage à trois. This sent Marilyn into such a rage that she denounced her lover and meal ticket to the police.

For being an accessory in the theft of the Lippi painting, he was sentence to ten years in Devil’s Island. For counterfeiting sacrosanct French currency he was given a concurrent life sentence.

Eventually the sentence was reduced to 20 years, and then to 15. But Flag never returned to France. He painted scenes of prison life, tried to escape several times, and afterwards, like many before him, settled in Guyana.

Ironically, the painting he copied was probably a copy. The war destroyed much of the Cathedral and its small abbey museum. In 1969 I went to Reims looking for the painting but could not find it. The last I heard, it was forgotten, stored away in the cellar of the museum. 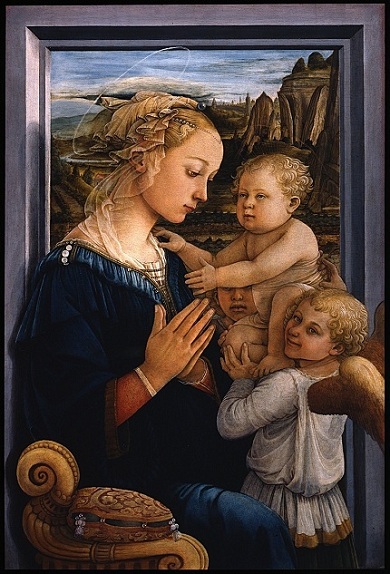 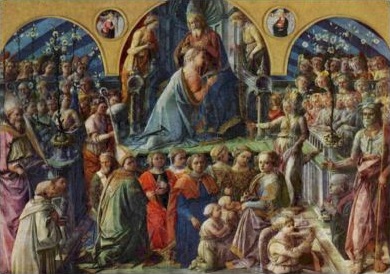 Filippo Lippi, Coronation of the Virgin