Many of the demi-monde characters who populated Paris during the early decades of the 20th century would never pass a Mormon bishop’s temple-recommend interview. Not even close!

These artists, composers, writers, and stage personalities fill the pages of many books, among them the carefully crafted Bohemian Paris, the 2001 best seller by Dan Franck. Their adventures cover all the facets of human experience.

Suzanne, the daughter of an unmarried laundress, was raised in poverty. At 15 she became a trapeze performer, a career that ended a year later when she fell. She knew how to fabricate her past: she was the daughter of a rich family, and she took the name Suzanne, even though she was christened Marie-Clementine. She had luminous blue eyes, which captivated men, as did her beauty. She posed, fully clothed, in several of Renoir’s loveliest paintings. 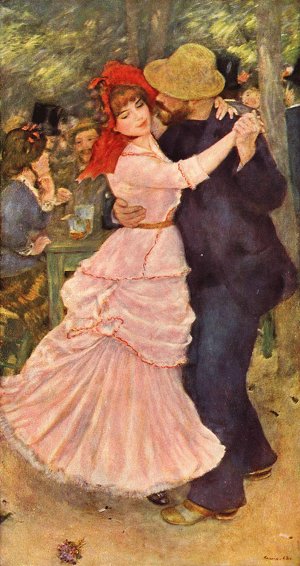 Pierre-August Renoir, Dance at Bougival, Suzanne Valadon is the model

Suzanne wanted to be an artist. Largely self-taught, she learned to paint by posing for the great artists of the day, and learning from them, including Renoir, Puvis de Chavannes, and Toulouse-Lautrec, who gave her art lessons, as did Degas. In 1894 she became the first female painter admitted to the Société Nationale des Beaux-arts. She, Berthe Morisot, and the American Mary Cassatt are the women prominently associated with the French Impressionists.

Using vibrant colors and contrasts, she painted all the subjects artists paint: portraits, landscapes, and still lifes. What she painted had to be just right, sometimes taking up to 13 years on a particular painting before she’d show it.

Suzanne Valadon was an extreme free spirit. She wore a corsage of carrots, kept a goat in her studio to “eat up my bad drawings,” and fed caviar instead of fish to her cat on Fridays. She caroused with her friends in the bars and bistros and was the subject of Lautrec’s oil The Hangover.

At 18, her carousing led to the birth of a son, Maurice. In an unpublished memoir of an American collector, Ruth Baldwin, and referred to in an article published in the New York Times in 2006, painter Diego Rivera left this anecdote:

After Maurice was born to Suzanne Valadon, she went to Renoir, for whom she had modeled nine months previously. “He can’t be mine, the color is terrible.” Next she went to Degas, for whom she had also modeled. He said,”He can’t be mine, the form is terrible!” At a café, Valadon saw an artist she knew named Miguel Utrillo, to whom she spilled her woes. The man told her to call the baby Utrillo. “I would be glad to put my name to the work of either Renoir or Degas.”

Like his mother, Utrillo did not start out to be a painter. He was not one of those notable child prodigies one hears about. After years as a single mother and mistress to many, especially to the composer Erik Sati, Suzanne married one of Sati’s prosperous friends. He dispatched the boy to Saint Anne’s Hospital for the criminally insane.

That husband was replaced by another, 20 years Suzanne’s junior, one of Utrillo’s best friends, André Utter, who was actually three years younger than the son. It was a bizarre but supposedly “harmonious” household, though the son was a perpetual drunk.

When Valadon and Utter attempted to lock him up to dry him out, they were beaten back by tantrums–screaming, throwing everything out the window, tearing up his mother’s drawings. A Saint Anne’s psychiatrist advised Suzanne to give the young man something to distract from his craving for wine. She brought him paint, canvas, and a supply of picture postcards, locked him in, and told him to paint.

Thus began the career of a painter who eventually would become wildly popular. That beginning experience also encapsulated him. He painted street subjects of all kinds, especially in Paris, but he hated painting out of doors. Many of his canvases continued to be adaptations from picture postcards and other photos. Like his mother, he was meticulous, about the scenes and the paints and colors he used to depict them. 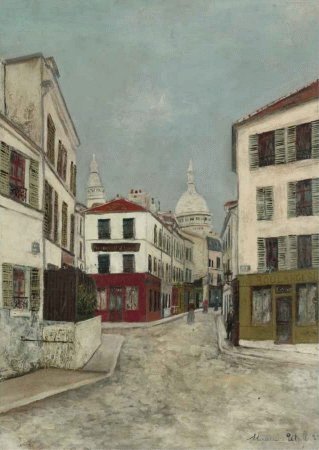 Alice Prin, like the other two, was illegitimate. She was raised in poverty by her grandmother. At age 12 she moved to Paris to find work and live with her mother. Her mother was not happy when Alice, 14, began posing in the nude for sculptors. Alice had other talents. Although she posed for a long string of important artist--e.g Foujita, Picabia, Calder, Cocteau–she became a painter and a music hall performer. Man Ray became her companion for many years and made hundreds of portraits of her by painting and photography.

She took the name of Kiki, and like Madonna or Cher at the end of the century, the single name was sufficient. When she was 26 an exhibit of her painting and drawings was a sellout. Two years later her autobiography was published, with introductions by Foujita and Ernest Hemingway. A translation published a year later was immediately banned by United States government. In 1929 she was declared Queen of Montparnasse, a section of Paris on the Left Bank and home of some of the most important gathering cafes in art history. 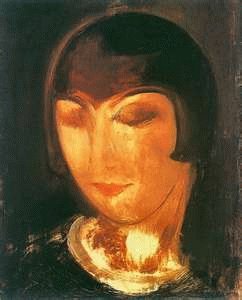 When the Germans conquered France in 1940, Kiki fled Paris. Her art was the “degenerate” kind Nazis, kowtowing to Hitler’s prejudices, seized the burned. Yet some of the Nazi leaders in Paris secretly acquired the art they found in Montparnasse.

But to go back to an earlier stage in Kiki’s career, she was hired to pose nude for Utrillo.

As Franck reports, “When Utrillo painted, nothing mattered except the work in progress. He forgot to eat and drink. . . a friend noticed the painter’s almost pathological perfection in making sure that everything was minutely and exactly reproduced.” As soon as a painting was finished, Utrillo went straight to his watering holes.

For three hours the nude Kiki held her pose while Utrillo painted. Finally, the trepidacious Kiki asked if she could look at the finished picture.

The artist moved away. Kiki stared at the picture. Then she burst out laughing.

Her face, which would thrill music-hall rowdies, was not to be seen. Neither was her famous body.

While she posed, Utrillo had carefully painted a little house in the country.