Have you ever wondered what modern life would be like without the blessing of printing? More specifically, have you imagined what modern life would be life without the technological wonder of printing with movable type? Not nearly so modern, nor so prosperous, comfortable, and interesting. The ability to take the written word and share it broadly through mass production of printed materials has changed our world, and blessed our world, in countless ways. So many things that we take for granted now have their roots in the invention of printing. The broad dissemination of information of all kinds, now global and almost instantaneous through the Internet, has its roots in basic typesetting, first done manually with small blocks each containing a single character, and then later done with mechanical, electrical, and then electronic tools. Modern news, medical knowledge, recipes, laws, patents and many other forms of intellectual property, scientific knowledge, books, novels, movie scripts, email, text messages, and, of course, scripture for the masses owe much to the glorious invention of movable type. Where would we be without it? Where would the Gospel and the Church in these latter days be without it? 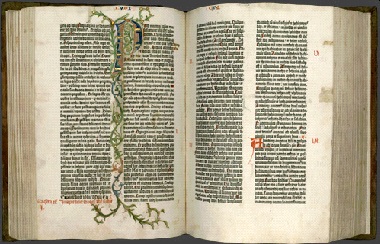 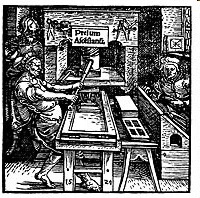 Now here’s a simple quiz to try on yourself (bear with me!) and your friends who might not be as educated (you are likely to be rather educated or at least more interesting than normal if you read the Nauvoo Times, by the way). In light of how important the invention of movable type and printed books has been on the economy and welfare of this planet, can you name the inventor who developed a movable system and gave the world the first mass produced book made with movable type?

This is an important question, so take you time. To help, here are a couple of hints.

OK, ready? Write down your answer. Pencils down—stop. I hope you did well. You can grade yourself. But do let me know how you did.

Most well educated adults, of course, know about Gutenberg and the Bible. Gutenberg’s accomplishment in creating the printed Bible was enormous, one we can all be grateful for. That breakthrough came in 1455, just 142 years after the world’s first mass produced book was printed in movable type in, um, China. Yes, China, the often overlooked source of many of the world’s great inventions (not just paper and printing, either!) in the past, and a nation that is striving to return to its historical leadership role in inventing and innovation (that’s another story that I’m always happy to share).

So let’s get back to the quiz. Can you name the Chinese inventor of the world’s first mass produced book printed with movable type? You now know it was in 1313. But perhaps another clue will help. OK, here’s one: This mass produced, substantial book, often overlooked by the West, may actually have helped trigger the Italian Renaissance. This is a controversial and perhaps long-shot theory put forth by author Gavin Menzies in his book 1434, where he proposes that a Chinese fleet arriving in Venice in 1434 brought hundreds of copies of a particular Chinese book filled with drawings and descriptions of inventions suspiciously like some of DaVinci’s. Others have argued that the book may have reached and influenced Europe via Arab traders over land, and others aren’t so sure the book really played a role. I’m not so sure, but Gavin Menzies is convinced it did. That’s your clue. Now can you name the inventor?

If you’re like a minute fraction of the educated people I’ve talked to, you gave what I think is the correct answer: Wang Zhen (王祯 in simplified Chinese, where Wang is the last name, ending in “g” of course), author and printer of the Nong Shu, the two-syllable title that means “the book of farming.” This special book was intended to save millions, not from spiritual death, but from physical death. During a dark time in China’s history, Wang Zhen feared that the many inventions in agriculture and related arts in China might be lost and that famine would prevail unless he could preserve and distribute the best knowledge available. So his book painstakingly records the technologies of China, including many fascinating drawings of water wheels, pumps, and even a blast furnace (long before it was “invented” in Europe). To achieve his ambitious aims, an effective printing method would be needed to print not just a few copies but thousands of copies of his extensive manual so it could be shared with magistrates and leaders all over China, who could then instruct the farmers. You can read more about this story at Wikipedia in the article “Wang Zhen (official)”. http://en.wikipedia.org/wiki/Wang_Zhen_(official))

Wang Zhen explored several approaches but settled on wooden block movable type. One advantage of wooden blocks is that the many unique, low-frequency Chinese characters that would be needed could be quickly hand-carved, in addition to having many hundreds of high-frequency characters prepared in advance. His work with wooden movable type was primarily conducted in the years 1297 or 1298. His major inventions along the way included the use of mechanical devices to sort and organize trays of wooden block characters to improve the speed and efficiency of typesetting. This included a complex system with revolving tables that allowed the typesetter to quickly find specific characters. Though not truly the inventor of movable type per se, he did create the innovation of the first mass-produced book, enabled by his technical inventions and driven by his passion to save millions. 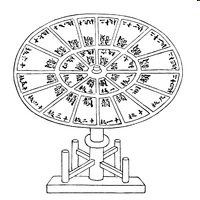 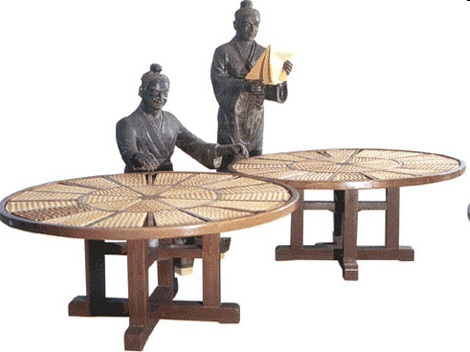 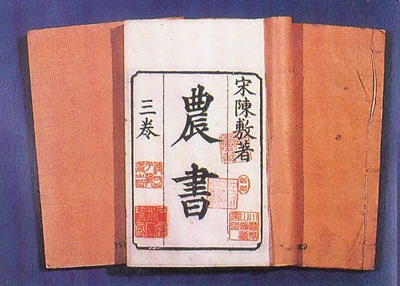 The book he would bring to life, the Nong Shu, is an illustrated agricultural manual showing a stunning assortment of devices, machines, and techniques in over 800 pages and with over 100,000 words (characters). It describes many aspects of daily life and agriculture, including many devices and systems such as movable type itself, water wheels, water-powered bellows, metal working and the blast furnace, gears and pulleys, etc. As an illustration of the detailed technical content, here is a passage from his 1313 masterpiece (from the Wikipedia article):

According to modern study, leather bag bellows were used in olden times, but now they always use wooden fan (bellows). The design is as follows. A place beside a rushing torrent is selected, and a vertical shaft is set up in a framework with two horizontal wheels so that the lower one is rotated by the force of the water. The upper one is connected by a driving-belt to a (smaller) wheel in front of it, which bears an eccentric lug (lit. oscillating rod). Then all as one, following the turning (of the driving wheel), the connecting-rod attached to the eccentric lug pushes and pulls the rocking roller, the levers to left and right of which assure the transmission of the motion to the piston-rod. Thus this is pushed back and forth, operating the furnace bellows far more quickly than would be possible with man-power.

As with most great inventions, Wang Zhen’s work drew upon learnings of earlier innovators. According to the great Chinese scientist and scholar Shen Kuo of the 11th century (Song Dynasty), the invention of movable type itself is attributed to Bi Sheng (990-1051) who developed ceramic movable type. Others would seek to improve the difficult, laborious ceramic approach using cast metal type. Tin was first used, but, as Wang Zhen experienced, tin was not adequately compatible with the range of inks available in that day and gave inferior quality. Later Hua Sui (华燧) (1439-1513 AD), a Chinese scholar and printer of Wuxi, Jiangsu province during the Ming Dynasty (1368-1644 AD), would develop cast bronze movable type that could be successfully used in printing, and would produce many books and further strengthen the printing industry. He belonged to the wealthy Hua family that was renowned throughout the region. Hua Sui is best known for creating China's first metal movable type printing in 1490 AD.

Bronze movable type underwent significant advances even before Hua Sui in Korea. The world’s first metal movable-type system for printing was made in Korea during the Goryeo Dynasty (around 1230). This led to the printing of the Jikji in 1377—today the oldest extant movable metal print book. Only one copy of the final volume survives, and it is not known how many copies of the book were printed or whether it could be called mass produced. The metal movable type printing system developed in this era did not appear to diffuse and affect large segments of society, but it was a notable historical advance in printing.

For inventions that led to practical printing and the world’s first mass produced book made with movable type, Wang Zhen played an important historical role in furthering the paper industry and, through the medium of printing, the spread of many innovations to millions. For his monumental but long overlooked role, he should be included side-by-side with Gutenberg in the annals of the paper industry. Sadly, most people haven’t even heard of him. Not even in China! I’d like to change that.

Next time you pick up a Bible or the Book of Mormon, even in electronic form, think back beyond Gutenberg into a troubled China of 1313, and remember the breakthrough and blessing we received when a man seeking to help others learned how to share the printed word with thousands and even millions. Thank, you Wang Zhen and all others who have advanced the arts of printing and the preservation and dissemination of knowledge, especially the knowledge of the things of God--but may we also be grateful for novels, cookbooks, patents, blogs, and every other valuable or wholesome thing with ties to movable type.